Road ahead for Muslims in Modi rule

Road ahead for Muslims in Modi rule 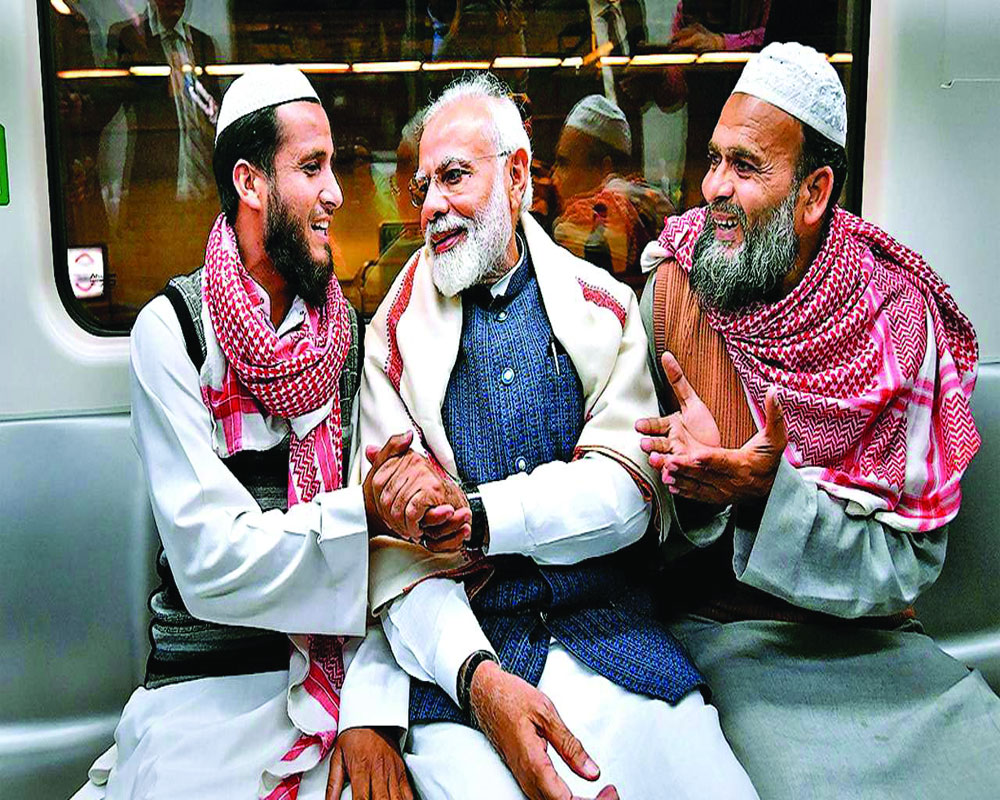 The Prime Minister has talked about the fear ‘psychosis’ among Muslims and promised to annihilate the ‘bogey’ created by vote-bank politics. But his ‘Sabka Sath, Sabka Vikas and Sabhka Vishwas’ pledge can’t change the perception unless he walks the talk

Sitting inside a salon last week in a Muslim locality of Delhi, I was drawn into a conversation centered on historical anecdotes. They talked about how Jews were massacred in Hitler’s Germany, killings in Yugoslavia during the Tito regime, annihilation of millions of people during Stalin’s rule in the USSR, and more contemporary ones like the status of Rohingyas in Burma. A little later into this strange conversation, I could easily realise that the interest in historical events of those sitting there was a reflection of their own fear of being a Muslim in Modi’s new India.  And soon one among us did talk about the detention camps in Assam for illegal “foreigners”, drawing a parallel with those in Hitler’s Germany.

Prime Minister Narendra Modi, on the occasion of being chosen as the NDA leader to lead the Government for second term, talked about the fear “psychosis” among Muslims, aided and abetted by vote-bank politics. “I am standing in front of the Constitution with my head bowed and making this plea to you. We need to break this myth,” he promised. However, Modi’s “Sabka Sath, Sabka Vikas and Sabhka Vishwas” pledge can’t change the perception unless the announcement is matched by actions.

Clearly, as many would argue, India is witnessing a period in its Independent history when Muslims living here feel more insecure than they were in the darkest of times, despite the urban middle class of the community making unprecedented strides in civil services in the last five years.

Despite, if one goes by the discussion, the fear is beyond those in the aftermath of Babri Masjid demolition and the post-Godhra riots in Gujarat. Also, there is a general perception among Muslims that unlike the past there is none left to “appease” the community. Unlike earlier elections, this time the community has literally been deserted by all so-called secular political outfits. The Congress manifesto for 2019 Lok Sabha did not mention the M word even once, and other so-called secular parties refrained from talking about Muslims during their election campaigns.

In these circumstances, it becomes imperative to understand the Muslim response to this dire situation. Muslims are scared today about their future amid debates of NRC being implemented all over the country, media reports and social media videos of individuals being thrashed in daylight by cow vigilantes.

However, besides fear, there is something else happening within the community but it is not getting the attention it deserves. As an Indian Muslim and someone who has been active in public life for more than a decade now, I can say with conviction that there is a churning for good that has happened within the Muslim community in the last five years. There is no empirical data to back my claims for now but there is enough circumstantial evidence to corroborate my conviction. Muslims are not looking for messiahs from the Indian liberal elite to merely sympathise with them, the new generation of Muslims living across India and occupied in different sets of occupation are talking about the need for leadership from within and are drawing inspirations from Black leaders like Malcolm X and Nelson Mandela.

Prominent young Muslims who engaged in the politics of communalism-secularism are often seen referring to German-American philosopher Hanhan Arendt’s quote, “If one is attacked as a Jew, one must defend oneself as a Jew.’

The new young urban Muslim middle class is trying to reinvent its image amid rise of pervasive Islamophobia through initiatives like interfaith iftars to engage with non-Muslims. The community that has always been maligned for having the deep-rooted sectarian division is trying to send a message of unity across by organising joint Shia-Sunni prayers on festivals.

Despite rise in the fear perception among Muslims in the last five years of the Modi rule, there is a healthy by contradictory empirical evidence of progress made by the Muslim community in public services. A cursory look at results of the elite civil services examinations shows the increasing representation of Muslims in services since 2014. In 2017, the figures went up to 50, the highest since Independence.

Universities like Jamia Millia Islamia and Jamia Hamdard, which have centres to coach Muslims for the civil services examinations, have seen a sharp rise in application forms from the community in the last five years. These youngsters believe that civil services give them not just opportunities to work directly with people, including those from the community, and benefit them but also a platform to be heard.

It wouldn’t be too much of an exaggeration to say that priorities and preferences of educated youth among Muslim community are changing politically too. Unlike past, their language of articulation has turned more towards constitutionalism rather than the old politics of so-called lopsided secularism. The Muslim youth are more willing to talk about education, health, equal opportunities, deprivation, safeguards and security.

However, considering the plight of the community as documented in the reports of Sacchar and Kundu committees, all these strides at the moment seem to be a drop in the ocean. Also these efforts are confined to middle class Muslims living in urban locations who still enjoy certain privileges over the masses.

There is also a churning within the caste Muslims. The caste inequalities and the marginalisation of the lower caste Muslims is a moot point. The secular parties that have long favoured high caste Muslims are being chided for suppressing the issues of the larger underbelly of the community.

Despite all the churnings and fear of Hindu nationalism, Indian Muslims, whose forefathers chose secular India over Islamic Pakistan, need to overcome this fear too. Muslims should be willing to forge social alliances and political alternatives that take of the concerns of the community.

Also, it is now for Prime Minister Narendra Modi to exhibit his credentials and value his words. Just after being elected the leader of the BJP-led National Democratic Alliance for the second term as Prime Minister of India, Narendra Modi raised the issue of fear among Muslims in India. He said, “Unfortunately, the minorities have been kept in fear... It would have been good if the focus was on their education; it would have been good if different social-political leaders could have been born from those communities, it would have been good if their socio-economic development took place at the same pace as that of other communities… Vote bank politics created this imagined fear, this imagined atmosphere and this environment of dread was created, thereby keeping them aside, keeping them repressed, and only using them during elections. In 2019, I am coming to you responsibly with a certain expectation; I am standing in front of the constitution with my head bowed and making this plea to you. We need to break this myth.”

Modi should be reminded again and again of what he has promised to do for the Muslims in the next five years of his rule.