Story on a string

Story on a string 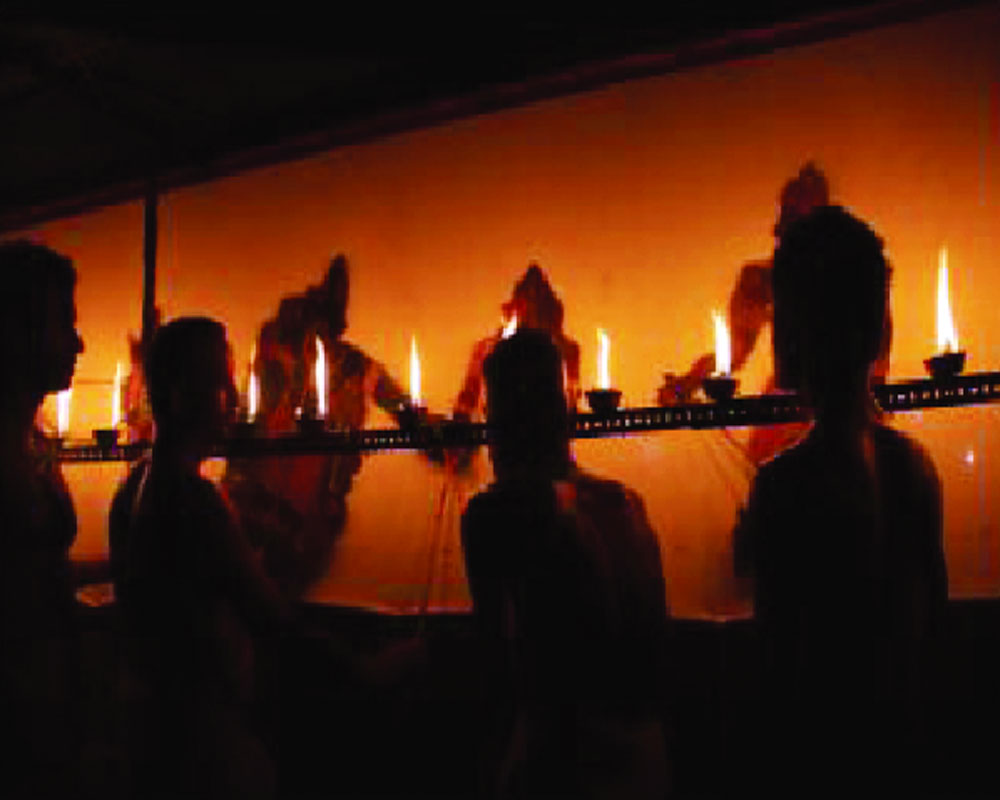 From the shadow puppets of Kerala to the kathputhlis of Rajasthan to an innovative performance by New-Delhi based Katkatha Theatre Trust, the world of puppetry is vast and diverse showcasing the country’s puppet theatre traditions. SHALINI SAKSENA speaks with artists to tell you more

Using puppets as a form of communication is ageold. The art form is believed to have originated about 4,000 years ago. There is evidence to show that puppets were used in Egypt about 2000 BC and that they were used in ancient Greece. Oldest written records of the art form has been found in Herodotus and Xenophon, dating from the 5th Century BC.

Hence, it is not surprising that our fascination for puppet theatre is still strong. The idea of watching a story come alive on the stage where puppeteers use various tools draws everybody. Dr Annapurna Garimella who is the managing trustee of Kathkatha who were a part of a summer carnival programme with an aim to showcase the diverse puppet theatre traditions of the country tells you that while puppetry is ageold, very few have knowledge about the diversity of the art.

“Most people only know about Rajasthani kathputli. There is shadow puppetry from Karnataka, Andhra Pradesh and Tamil Nadu. Kerala too has its own version. These versions never made it to the cities and people had no idea about this art form,” Garimella says whose work involves create a space where puppeteers could train, get a platform to start their own company and create high quality puppet theatre that was not just for the children but for adults.

She tells you that in the last 20-22 years there has been a massive change when it comes to this art form especially in a city like Delhi. “This is because of the high degree of expectation from the audience due to a few theatres who are doing a high degree of puppetry. There is an annual international puppet festival in the city that brings in international shows. In other cities like Bengaluru too there is exposure to theatre throwing up possibilities. In Mumbai and Kolkata the theatre scenario is very different. But the numbers are growing which is good since people are taking up the art form professionally,” Garimella explains and says that the earning is directly in proportion to the quality of the show.

“The challenge is that the traditional audience is eroding and instead of a houseful for 21 days, today, it is down to four nights. The question that needs to be answered is if the traditional audience is disappearing what is it being replaced by? Therefore, there is a perception among traditional puppeteers that puppetry is a dying art. Here too, there are specific areas. Puppet theatre is not a monolithic block in the country. There are 17 living art forms. In this, the ones that are in a challenged space are Odisha glove form. Nobody is interested in this art form anymore. Similar is the case with Tamil Nadu shadow form. But not the other art forms. Sadly, the perception that the puppetry is dying, the youngsters are being prevented from pursing this art form,” Garimella says and tells you that puppet theatre traditionally was not meant for children, it was for adults.

“All our traditional puppetry were for adults, children would be a part of the audience. Puppets were used to discuss deeply philosophical, political issues and social reality because puppets are a metaphor (dead material) which lives only in the minds of the audience. This is an interesting phenomenon — where you know something but believe in something else,” Garimella says whose puppet theatre About Ram was recently a part of a festival that was celebrated at Phoenix MarketCity in Chennai.

A shadow puppet artist from Kerala, Vipin, tells you that there are four main types of puppetry in India. Glove, rod, shadow and string. The difference is that while one can see glove, rod and string puppets directly, one can’t see shadow puppets — only their shadow can be seen. He also tells  you that there are five traditional shadow puppetry States— Odisha, Tamil Nadu, Karnataka, Andhra Pradesh and Kerala. “In Kerala, shadow puppetry is played in temples to please Goddess Bhadrakali. In a battle that ensured between Bhadrikali and Tarika; the latter was killed. During the same time Ram-Ravana fight was taking place and Bhadrikali missed battle. She requested Lord Shiva, her father, to show her the battle again. He told her he couldn’t show the original fight but only the shadows. That is how this puppetry form originated,” Vipin says.

He tells you that it is tough to put shadow puppetry alive as people are looking for newer forms of entertainment. “While in India people seek other forms of entertainment, it is other countries like Thailand, China and Indonesia where this art form is appreciated since it travelled to these places from India,” Vipin tells you where his performance outside of India is always from Ramayan where as in India he has to come up something new every time and has told stories from Krishan Avataar, Buddha Avataar and Narsimha Avataar.

“I come from a family who have been in this profession for 15 generations. I have performed in over 13 States. Sadly, people are more appreciative of this art form outside of my State. One reason is that they don’t get to see this art form. Second, they are open to see a story unfold told from Ramayan,” Vipin says, a psychiatric counselor, who has worked with NACO. He has also worked with Juvenile Justice Board. But it was his passion with the puppets that made him resign his job and take up the theatre professionally.

He also tells you that he makes his own puppets from goat and ox skin that are mounted on bamboo sticks. “Traditionally, deer skin was used which was harder and didn’t require much maintenance. Today, the leather puppets only survive up to five years. Even then we have to keep them in wooden boxes. Also, after monsoons, we have to put the puppets out in the sun and cover them with a paste,” Vipin explains.

Another artist who was part of the festival was Seema Kohli a Delhi-based artist who performed Retracing Paradise: The Word for the World is Home. “My interest in puppet began when I was gifted a huge Hanuman  puppet from Kerala. I had meaning to use this as a medium and get my work moulded through this art form,” Kohli tells you.

For her, the challenge lies in getting the puppets ready in time. “Last year, I had to cancel a show since the puppets were not ready.  The good part is that the audience is always receptive. The downer is that most people are of the opinion that a puppet show involves kathputli which is not the case. But the limited awareness doesn’t hamper my creativity. This means that I am looking for new mediums and do experimentation,” Kohli says.