Talktime | ‘A star abused me on sets’

Talktime | ‘A star abused me on sets’ 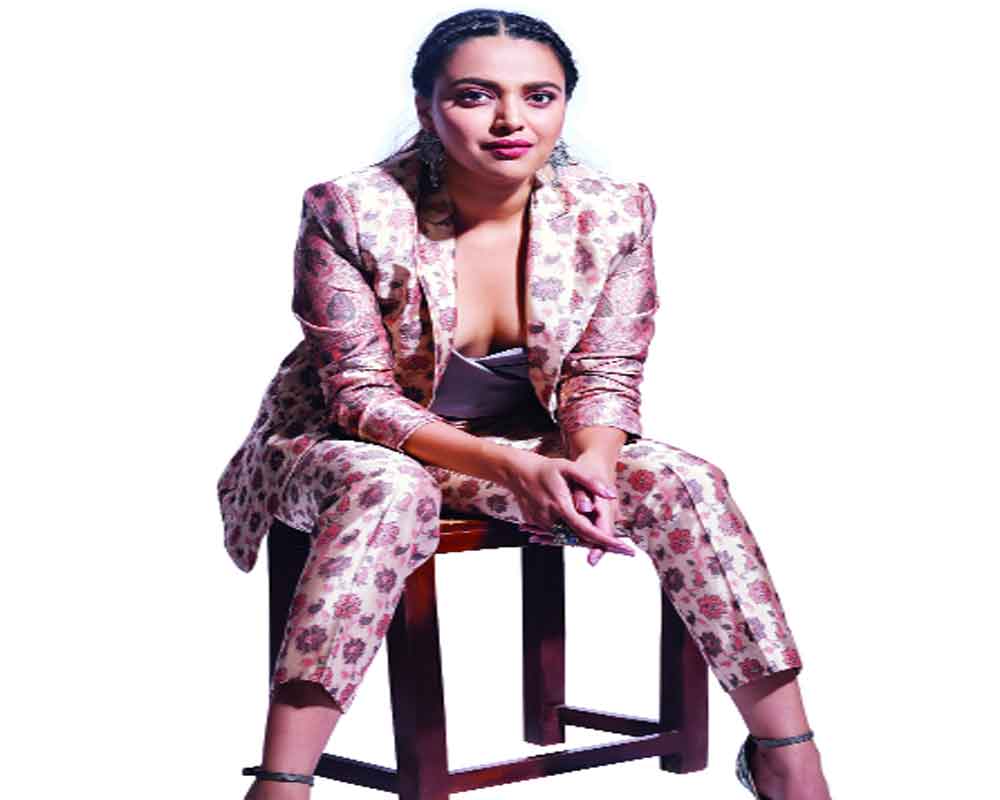 Swara bhasker Known for her roles in Tanu Weds Manu and Veere Di Wedding, Bhasker never fears in voicing her opinions. She speaks with Musba Hashmi about how she never had the fear of getting typecast and upcoming projects

Having born to a naval officer, how did you end up doing acting?

I had a regular childhood. My parents are from Delhi and I was born and brought up in the city. And like every other child of the generation, I too was obsessed with Chitrahaar (aired on DD National) and Superhit Muqabla (aired on DD Metro). I wanted to be a part of those shows. After I grew up and was studying in Jawaharlal Nehru University, my interest in acting grew even more. I wanted to be seen on the screen. Then after completing my MA, I shifted to Mumbai to pursue my dreams.

You debuted with Madholal Keep Walking but the film didn’t do well. Did it dishearten you?

My first film is a different project that has not been released till date. By the time Madholal... released, I realised that it’s not just enough to shoot a film but there’s a whole process to get them released. So you have to land in projects that will actually get released and not just shot. I didn’t expect Madholal... to do well because there’s a whole system for distribution and economic breakdown also. It didn’t dishearten me at all. Also, the film got good reviews. Then I got Tanu Weds Manu and I got so many accolades for the film and that actually became my break.

In the initial days of your career, did you have the fear of being typecasted?

No. You’re right that a lot of people try to tell what one should do and what not and direct them by saying not do a particular type of role or else you’ll get typecasted. But, I never had this fear in me. I was clear in my mind that I wouldn’t be spending my life waiting for the ideal role to come to me. I can’t sit idle. I start angsting if I am not working. I knew that I couldn’t get a star-child launch. Not that Karan Johar or Sanjay Leela Bhansali would be launching me opposite a superstar, that was never going to happen. I figured it out that I have to showcase my work.

If you’ll look at my career, I have broken all the rules and have done everything that people tell aspiring actors not to do. My biggest break, as I mentioned earlier turned out to be a heroine’s best friend’s role. And it is in the industry’s dont dos list. Then Bindiya, the rejected lover in Raanjhanaa, next came Salman Khan’s sister in Prem Ratan Dhan Payo, it was a role that no actor was ready to play it, followed by Nil Battey Sannata which people told me that it was like a career suicide because I played a mother of a 15-year-old at such a young age and then ofcourse Sakshi Soni’s masturbation scene in Veere Di Wedding. I had done TV at a time when people considered it uncool. So, I believe in breaking all the boxes and that’s what I tell others to do too. I don’t pay attention to what people say not out of disrespect but because how can someone else decide for me what is my trajectory in life.

A worst and best moment in the industry.

My worst experience was when a star abused me on sets just because they were having a tantrum. I don’t want to get into name calling, but it happened infront of a lot of people and everyone just stood still. After a moment, they all ignored it and behaved as if nothing has happened at all.

There are a lot of good experiences that I have had in the industry. But the best moment has always been the messages that Sooraj Barjatya sir keep on sending me every now and then praising my work and checking up on me if I am good or not.

You often have been at the receiving end for raising your voice on different issues. Does these trolls affect you in anyway?

It’s not nice to be at the receiving end of trolling but I don’t pay attention to it now because I have become familiar to it. But, the thing that I do feel bad about is people misunderstand what I say. And this is not a nice place to be in. It is like a collateral damage of speaking out but I wouldn’t stop speaking up fearing that somebody would misunderstand me. I cannot help that. I remember when I wrote that open letter (to Sanjay Leela Bhansali for Padmavat) so many people got angry on it for no reason.

Most of them didn’t even read the letter, they just read the headline. I don’t even choose the headlines, the publishing platform does. So, I was a little sad at that time, but it’s fine. I think people are not used to seeing women speaking up on issues, they just don’t like it. It is a bigger problem and I don’t understand what’s a big deal in that.

Can you talk about your upcoming film Sheer Qorma?

It’s a beautiful film about a Muslim same sex couple directed and written by Faraz Arif Ansari. It’s a subject that we have not seen on screens before. It’s a long-short fiilm, which means it’s not a full length film. It’s a dream come true moment for me because Faraz have given me the opportunity to work with Shabana Azmi ji and Divya Dutta ma’am.

Do you think the film can land in some controversies because of the sensitivity of the topic?

I can’t predict a controversy. But the soul of the film is so pure, I don’t think there can be any controversy around it. I am convinced that it will go well with people.