The complexities of caste system

The complexities of caste system 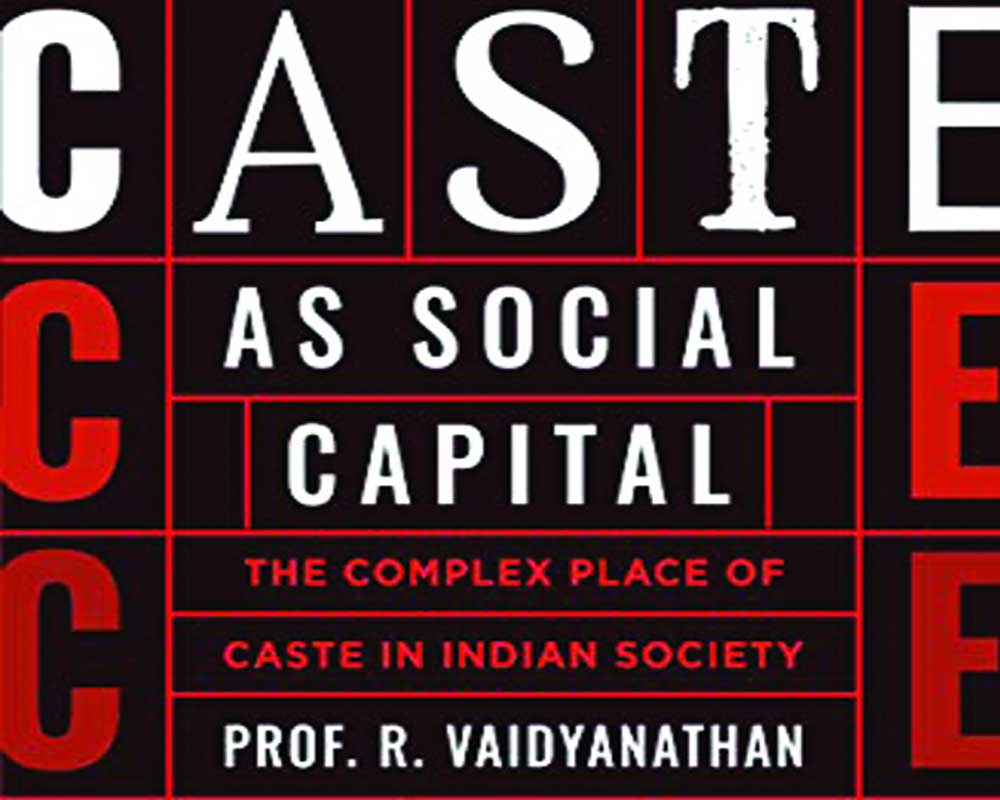 The book is a well-argued account of how the caste system in India has been distorted by the self-styled liberals who take the gullible for a ride under the pretext of a casteless society, writes Kumar Chellappan

A 131 page book packed with shocking but well researched facts, data and information. That’s how “Caste As Social Capital”, authored by Prof R Vaidyanathan can be described. The data painstakingly collected by Prof Vaidyanathan and presented in an articulate manner points at a big reservation fraud. The book is an account of how the caste system in Indian has been distorted, mutilated and misinterpreted by the self styled liberals who have taken the gullible for a ride under the pretext of salvation and casteless society.

The modern English education introduced in the subcontinent by Thomas Babington Macaulay during the colonial rule of British has succeeded in creating generations of Indian youth suffering from serious inferiority complex. They have not read Sanskrit or Kalidasa or Megha Sandesham and hence are ignorant about the rich Indian heritage. For them, what matters is the manufactured and distorted history inculcated in the Indian psyche by the Macaulay designed education. “Our English schools are flourishing wonderfully… The effect of this education on the Hindoos is prodigious. No Hindoo, who has received an English education, ever remains sincerely attached to his religion… It is my firm belief that, if our plans of education are followed up, there will not be a single idolater among the respectable classes in Bengal thirty years hence…” Macaulay wrote to his father in 1836. Needles to say, the modern day Indians have done Macaulay proud by living a life as scripted by him way back in the 1830s.

While the colonial masters aided by evangelists and proselytisers had a free run all over the country, the great truth about the rich cultural heritage of this nation lies buried thousand fathoms deep. Prof Vaidyanathan, through his book is trying to bring the real picture out in the public domain.

What “Caste As Social Capital” tries to tell the readers is that despite the protests by the Left and Liberals against the Indian caste system, it has more advantages than disadvantages. And the most shocking disclosure made by Prof Vaidyanathan is that the Reservation System practiced in India is a big fraud perpetrated on the Hindus of India by forces which want the annihilation of the Sanatana Dharma.

The Mandal Commission recommendations were implemented in early 1990s by politicians with selfish motives. Though there were widespread agitations against the recommendations that “robbed” a major chunk of seats in educational institutions and government jobs from the merit category and placed them at the disposal of communities categorised as Scheduled Caste, Scheduled Tribe, Other Backward Communities and Most Backward Communities, the mainstream media sought to downplay the same to suit their business interests.

How many among us remember the martyrdom of Rajiv Goswami, the New Delhi youth who tried self immolation to protest against the then VP Singh government’s decision to implement the Mandal Commission Recommendations. India was not the same after the implementation of those recommendations. Prof Vaidyanathan says that the recommendations were erred and out of sync with reality. The quota and per cent of reservation announced by the Mandal Commission were based on flawed  numbers, facts and figures. The last caste census in India was held in 1931 and the recommendations of the Commission were based on the data collected in that census. For more than six decades, there were no caste census of any kind in India and setting apart 27 per cent quota for OBC against the findings of the 1931 census was against all norms, says the professor.

The government brought in reservation as an act of atonement for the kind of discrimination the SC, ST and the Backwards had to allegedly suffer n the hands of the upper caste and Brahmins, so goes the argument. But a research by renowned Gandhian, Dharampal, has proved that there was no discrimination of any kind against the SC, ST and the OBCs at any time of the history. “Dharampal discovered that a fairly detailed survey of school and college education has been undertaken by the British administration in the erstwhile Madras Presidency Area. According to the survey conducted between 1822 and 1825 in the Madras Presidency (that is, the whole of the Indian States of Tamil Nadu and Andhra Pradesh, and parts of Odissha, Kerala, Karnataka, and the union territory of Lakshadweep), 11,575 schools and 1094 colleges were then in existence in the Presidency and the number of students in them were 157, 195 and 5431 respectively,” writes Prof Vaidyanathan. Shudras (backward castes) constituted 70 to 80 per cent of the students in Tamil speaking areas, while the per cent of backward caste students in Oriya speaking areas was 62 per cent!

Interestingly, share of the Brahmins in Tamil-speaking areas of the Madras Presidency were a mere 13 per cent in South Arcot and 23 per cent in Madras. That much for the leaders who demand still more reservation for the backward, SC and ST sections of the population!

Another report by J Dent Secretary, Fort George, dated February 21, 1825 states that out of 1,88, 680 scholars in all the collectorates of Madras Presidency, Brahmins made up 23 per cent while Shudras constituted 45 per cent.

The author has successfully demolished all the arguments put forward by the political leadership justifying the need for continuation of reservation, and that too the most unscientific and crude form of reservation. “The assumption made by the Mandal Commission based on the 1931 Census and other parameters that more than 50 per cent of the population belongs to OBC may not be true any longer. The National Sample Survey 2003 suggests that the OBCs may only constitute around 36 per cent of the population and not 50 per cent as was assumed earlier. If one excludes Muslim OBCs, then the figure falls to 32 per cent, according to the NSS. The National Family Health Statistics conducted in 1998 suggests that the population of OBCs is around 32 per cent which is fairly close to the NSS figures,” (Page 10-11, Caste As Social Capital).

While demolishing and exposing the flaws in the claims by the powerful pro-reservation lobby, Prof Vaidyanathan has argued that the caste system in India is not that bad and has done a lot for the economic and social upliftment of the poor and the downtrodden. The days of Marx and Engels who argued that religion is the opium for the masses are long gone. The religions are alive and kicking. Caste and religions are the ultra modern social networking institutions, more progressive and advanced than the five-star clubs we see in metropolitan cities, membership of which is a coveted honour for social upward mobility.

“Caste As Social Capital” is a must read for all those who shun castes and religion as well as for those who find solace in them.