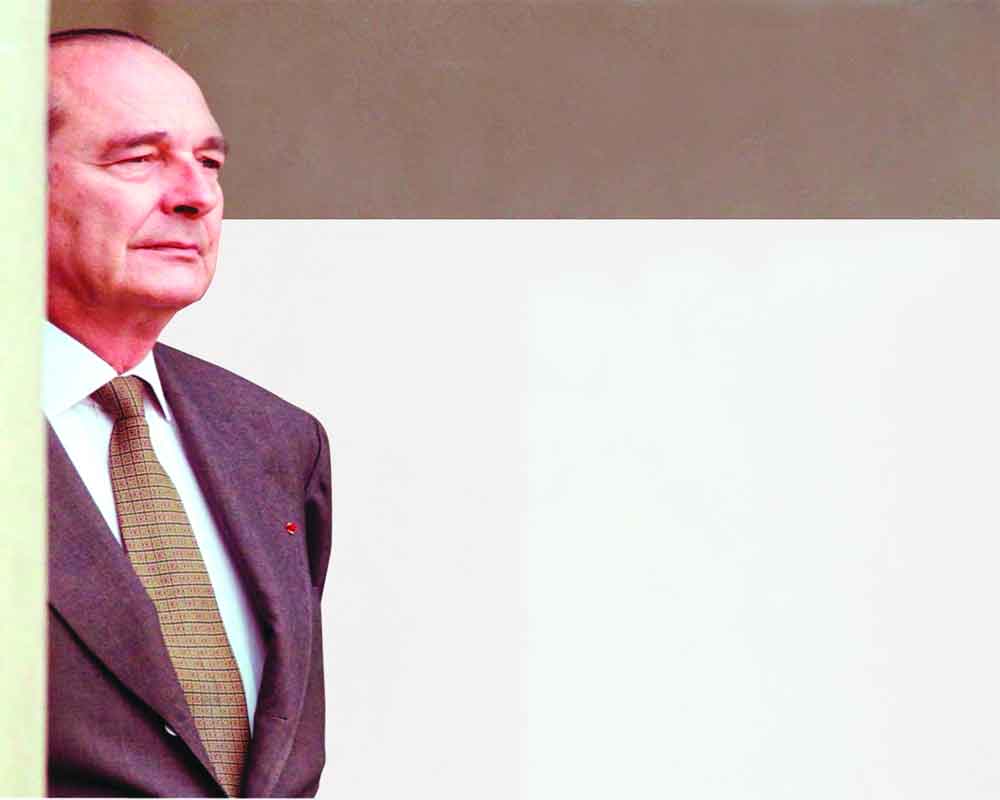 Former French President Chirac is remembered for his balanced stance between the Left and the Right political ideologies in France and his bold disposition in international matters, be it against the US-led war in Iraq or championing the European Union, writes Miniya Chatterji

Jacques Chirac had a loud mirthful laugh which usually accompanied a witty remark. He genuinely enjoyed meeting people, sharing a joke, and exchanging news. Hardly a memorable orator, his words stuck because he was frank. And so his open opposition to the 2003 US-led invasion of Iraq came as no surprise and nor did his public recognition of France’s role in the deportation of Jews during the Nazi occupation of the country during the second world war.

He kept an open mind — he was a staunch defender of la vieille France as much a champion and admirer of the East. He had been nicknamed ‘the bulldozer’ as Prime Minister Georges Pompidou’s main troubleshooter in the 1960s, but it was an appellation that belied his ineffectual latter years in politics which was the period during which I knew him.

I first met Jacques Chirac in 2003. I was 24 years old, working as an intern at a political foundation created by Chirac’s Chief Counsellor, his best friend for over five decades, and former CEO of Suez (for twenty years!), Jerome Monod. Very soon, Monod had brought me over to work as a policy analyst out of his office, the salon d’argent at the Elysee, that was placed right beside the office of Jacques Chirac who was the President of the French Republic at that time.

Chirac liked the appropriate use of the French language. During my earliest meetings with him, he had told me “Speak slowly… French”. He quizzed me about India and also China, as if being an Asian I was to know of both. A few times he challenged me to compete with his official speech writers, of which I won the game only twice. Both times, I was to write about Asian topics. In Europe he was losing the race to Germany, of being seen as the main force behind the unification of Europe. But that did not stop him from bringing France to the rest of the world.

He was pro-business as much as he was supportive of the arts. One of my most memorable projects was when Monod and myself, accompanied by another colleague, travelled to India to prepare for Chirac’s impending visit the following year in 2006. We met with Ratan Tata at Bombay House, Rahul Bajaj at his manufacturing unit on the outskirts of Pune, Narayan Murthy in his office overlooking the Infosys campus in Bangalore, as well as cultural icons such as Yash Chopra, Alyque Padamsee, Sanjana Kapoor, Mallika Sarabhai and others. My job was to take notes that would feed into the talk points for the President’s meetings with his Indian counterparts. Indians in general did not warm up to him too much. The French and Indian leaders often speak different languages — I am not referring to the French, English, Hindi languages here. But Chirac had political friendships in Iraq, Japan, Lebanon, and other unlikely countries in the East. In fact, post retirement, the Chiracs lived in a Paris apartment courtesy of the family of the former Lebanese prime minister, Rafik Hariri.

In February 2006, when Chirac indeed visited India, he was keen to boost economic ties with an emphasis on civil nuclear cooperation. That year, India and France issued a declaration on the “development of nuclear energy for peaceful purposes”. Civil nuclear energy along with aerospace, healthcare, and education continue to form the cornerstone of the French-Indian relationship even today. In fact, last week, after a 15 year procurement process that was fraught with controversies, India got its first Rafale jet in France with Defence Minister Rajnath Singh taking a sortie in the combat aircraft. The first aircraft will arrive — in a batch of four — in India in May 2020 once the Ambala airbase trains pilots. France and India harbour an unmet potential for greater private sector collaboration. Just in the field of my specialisation, which is corporate sustainability, there is much that French companies can offer their Indian counterparts in terms of technology, equipment, and R&D. There are several collaborations on paper that lack any substantial tangible outputs. The two countries also need to better ‘in sync’. The choice of exhibits and content during the recent Bonjour India festival organised by France in India was a glaring example of how France just does not get India.

France has also long been eager to be the top choice for the brightest Indian students. France has hoped that the trumpisation of the US will result in more Indians choosing France as their destination for study. This to some extent is true. The number of outbound Indian students to France has increased several fold over the years yet Canada, UK, and Australia have lapped up the brightest brains who do not make it to the US. The calibre of Indian students going to France is severely lacking and this is an aspect that France’s ambassador to India, Emmanuel Lenain, who presented his credentials just last week, could look into as a priority. There was also a surge of MOUs between French universities and their Indian counterparts in the past 10 years which has now slowed down mostly because of the increasing reluctance of French students to come to India to study. For various reasons, French students no longer see India as an exciting destination to live, learn, and study. Moreover student internship visas in India are painfully difficult to obtain and the recruitment of a foreign citizen in India is expensive, further dampening the spirits of young French students to study in Indian universities. EduFrance, a French government agency that continues to be the central node for all international cooperation in the domain of education in France, was established during Chirac’s tenure.

Despite his tall and imposing frame, Chirac came across as an ordinary person. He went jogging in public and liked to catch a drink with the locals. I remember once seeing his dog Sumo romping the rose gardens at the Elysee, soon after which Chirac quickly stepped out of his office rushing to get his pet just as any of us would. Many consider that his tact and ability to connect with common people allowed him to bridge the deep divide between the left and the right political ideologies in France. For example, in 1968 he had successfully negotiated for peace with the leaders of protests that had taken France to the brink of chaos. However, there are others who say that Chirac was a political chameleon who merely adapted his policies according to what voters wanted. But almost everyone says that especially towards the end of his second tenure as President, Chirac had learnt the art of sitting comfortably on the fence. During the times that I interacted with him, France’s economy was dwindling and immigrant riots had broken out. Chirac had indeed energetically campaigned on the fracture sociale or social divide in France but in reality, he did little about correcting it. It would be hard to point to any major domestic reforms either that Chirac made for an economy and society that had badly needed them.

It used to be the window above the desk of Francine Ros — the untiring assistant to Jerome Monod for forty years — that had consistently offered me the best view to the kingly welcome parade given to state guests in the courtyard of the Elysee. Francine Ros, wrote to me three years ago informing me of Monod’s death and giving me details about the prayer service. She had earlier also told me that Sumo was in depression once he no longer had the Presidential gardens to frolic. But in the past year, my attempts to reach Francine proved futile as did my calls to her when I read with great sadness about the death a fortnight ago of Jacques Chirac.

Chirac was indeed a dominant figure in world politics for four decades. He was President of France for two terms, totalling twelve years. Previously he had been twice prime minister and a highly visible mayor of Paris for 18 years. Only years later would his mayoralty emerge as the source of scandal: In 2011, he was convicted of misusing public funds to finance his political party while running the city of Paris. There have been other criticisms of his personal life, accusing him of affairs and mistresses, confirmed by a book published by his wife Bernadette who calls herself a “prisoner of traditions”.

Yet, Chirac is most remembered for his balanced stance between the Left and the Right political ideologies in France and his bold disposition in international matters, be it against the US-led war in Iraq or his championing the European Union.

“Who is Jacques Chirac?,” a reporter had once asked.

Chirac had replied: “It is of little importance who he is in private and intimate life. It is only the political personality that should interest us.”

The writer is CEO, Sustain Labs. She is the author of Indian Instincts: essays on freedom and equality in India (Penguin, 2018)