The life and times of Chandra Shekhar

The life and times of Chandra Shekhar 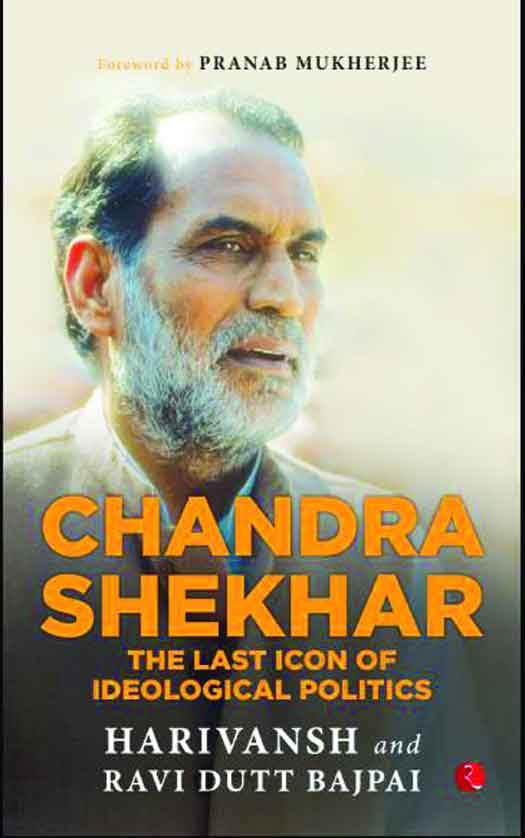 This biography is a well-researched and well-written account, bringing out the ideas, ideals, principles, values and vision of Chandra Shekhar in a very lucid and eloquent manner, writes Rup Narayan Das

At a time when there is a discernable churning in Indian polity and society, the biography of Chandra Shekhar written by Harivansh and Ravi Dutt Bajpayi reflects its transformational and aspirational aspects. The post-Independent politics of India has been predominantly dominated by elitism and this predominance is largely reflected in the political narrative woven and written by the ruling class, marginalising the contributions of political leaders like Chandra Shekhar and few other such stalwarts. The book under review chronicles not only the life and times of the indomitable Chandra Shekhar, hailed as ‘young Turk’; but also sheds light on the contemporary politics of more recent time which is witnessing a churning breaking the shibboleth of vested interests perpetuated from generation to generation. This churning is characterised by the emergence and crystallisation of non-Congress regime and ideology having a distinctive identity and political flavour.

Chandra Shekhar occupied the exalted position of the Prime Minister of the country for a brief period of time at a very critical juncture of India’s history. He, however, embraced the challenge with great fortitude and political sagacity and ingenuity. It was not so much the thirst for power and position as for the larger interest of the country, which is although understood by the political class and the intelligentsia, but not appreciated and applauded. Reconstructing the tumultuous political circumstances in which Chandra Shekhar became the Prime Minster of the country, the author(s) writes, Chandra Shekhar became the leader of the splinter group with the support of fifty-two members of Parliament from Janata Dal. The BJP had already withdrawn support from V.P. Singh’s government, leaving Singh with no option but to seek a vote of confidence in the Lok Sabha. V.P. Singh lost the vote of confidence on November 7, 1990 and the Congress party decided to support Chandra Shekhar’s bid for the position of the prime minister. He was sworn in on November 10, 1990.

While the political condition of the country was very volatile, added and abated by the aftermath of the demolition of Babri Masjid and turbulence in Jammu & Kashmir and Punjab, the economic condition was precarious almost on the threshold of a major crisis. In March 1991, the prospect of a default on sovereign repayments was alarming. It was feared that reneging on repayment of loans would lead India to loss of credibility and financial insolvency internationally. It was in this backdrop that cabinet secretary Naresh Chandra briefed Prime Minister Chandra Shekhar about the option of using gold as collateral to raise foreign exchange The Prime Minister had some reservation to take such a drastic action. Chandra Shekhar mulled over the proposal in the context that he was heading a care taker government and that election had already been announced. Finally, however, he agreed to the proposal. It was indeed a bold and courageous decision fraught with unforeseen consequences. The author quotes the then chief economic adviser Deepak Nayar that Prime Minister Chandra Shekhar decided to ‘ship 20 tonnes of gold, confiscated from smugglers to raise $200 million from the Union Bank of Switzerland through a sale-with-a-repurchase option’. Applauding the bold and courageous decision of the Prime Minister, the author writes Chandra Shekhar relied on his rustic wisdom to rationalise the pledging of gold to recover the land, then earn from the land to retrieve the gold back. The bureaucrats involved in the physical shipment of the gold remembered how terrified they were until the precious consignment safely reached London. The economic crisis was not of his making, rather the crisis was bequeathed to him by inept handling of the economy by the previous regimes. Yet another major decision that Chandra Shekhar took during the Gulf war was to permit the US air force to refuel on Indian soil. In hindsight, it can safely be said that he was the harbinger of strategic shift of India’s foreign policy which led to strategic partnership between the two countries in later years.

At a time when the nature of Indian polity and political parties have undergone a transformation under the impact of technology and huge resources, the author recounts how Chandra Shekhar built his political party brick by brick and was rooted to the ground and connected with the electorate. He was not a leader who was parachuted from above, rather he grew from the grassroots and internalised the suffering and the toil of the common people. The author writes that his own suffering and suffering of his own family like the death of his mother due to the lack of medical assistance inspired him to struggle for the creation of a social order that would set people free from miseries and his vision of an equitable society was not gleaned from books or imbibed from political philosophies but was attained through his livid experiences. Could one imagine that as the joint secretary of the Socialist Party he washed the utensils at the party office in Lucknow after waking up early in the morning. Similarly, the author mentions how he once had to sit on the floor of the train, between two toilets, while on a journey to Delhi. Such was the simplicity of a mass leader who subsequently became the Prime Minister of the country. He was a leader of deep political conviction, and pragmatic and open mind, receptive to new ideas and alternative perspectives without compromising his core values of nationalism and commitment to public service.

The first author, who is currently the deputy chairman of Rajya Sabha and a distinguished editor, had a long association with Chandra Shekhar and had the privilege of knowing him personally and very intimately. Earlier he had written extensively on Chandra Shekhar in Hindi. The present book synthesises and updates his earlier writings. The book is well-researched and well-written bringing out the ideas, ideals, principles, values and vision of Chandra Shekhar in a very lucid and eloquent manner.

The reviewer is a senior fellow of Indian Council of Social Science Research (ICSSR) affiliated to Indian Institute of Public Administration, New Delhi