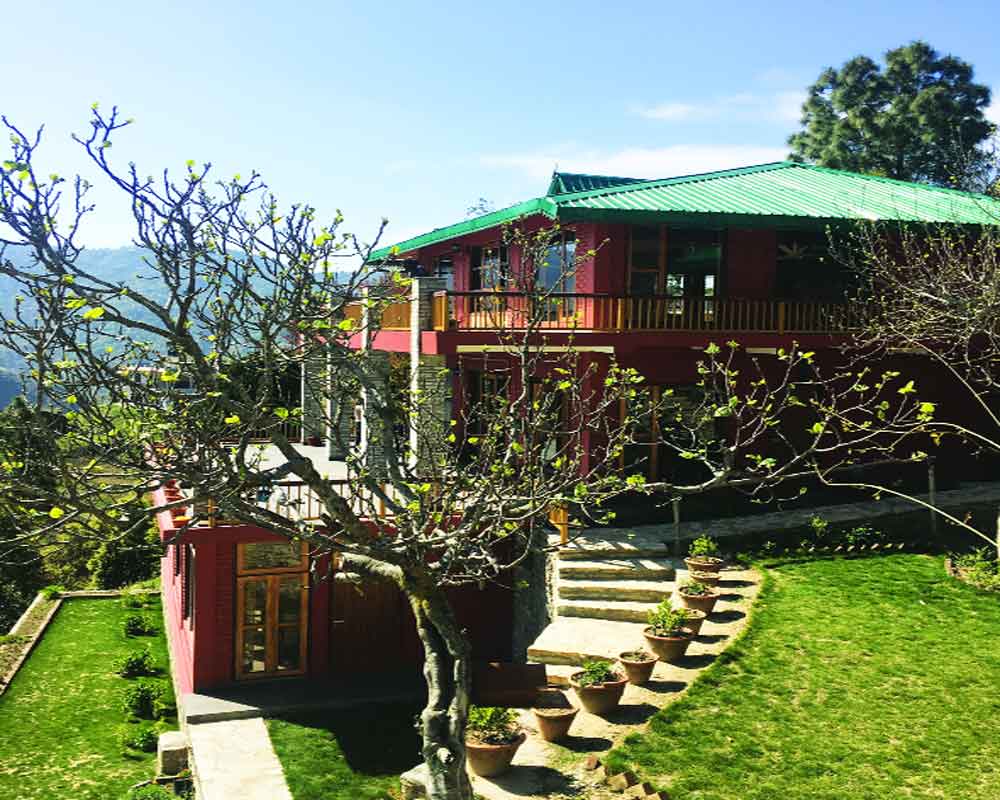 The quaint village of Parvada in Uttarakhand makes for a quick getaway and a perfect escape for those seeking slow life. No fancy resorts here, just a quiet homestay. Navneet Mendiratta returns to the city recharged

The early morning hustle is real — especially, when you have to catch an early train from one of the busy stations in Delhi. No matter how well ahead you plan to get there, the traffic snarl right before the station has often had many scramble on foot to make sure they don’t miss their train. I have been lucky so far. Never mind, if that means I make it to my reserved seat in the train barely two minutes before it departs the station!

Well, Delhi has been particularly lucky this year to be a recipient of a good monsoon spell. And hills of Uttarakhand have lapped up the rain, often flooding, but only to emerge greener and cleaner. The mood set by the flaming red buransh (or rhododendrons) that bloomed well into the summer, is only enhanced by the vibrancy of the present lush green of the hills. The escape from the city life is worth every bit of fresh cool air and purity of the surrounds. Thank goodness for the proximity of this city to allow for quick getaways!

Post a six hour journey via Shatabdi (to Kathgodam) and two and hour onward by road, I find myself in a quiet little hamlet, called Parvada in Uttarakhand, and a beautiful homestay named after the village. The village to its credit holds the title of “Adarsh Gaon” from the state. The name may not ring a bell to most, but the villagers take great pride in sharing their accolades with you. There is, however, more than just the title to this village. It’s the ideal escape and you’d know why once you are here.

About 20 km from Ramgarh and only 10 km from Mukteshwar, Parvada makes for a great offbeat destination, falling in the south Gola range in Uttarakhand, India. As most other stations in the hill state, popular for short breaks because of their proximity to this over-crowded mad city, find themselves bursting at the seams for trying to accommodate the visiting and the native population, here is a quiet little place with roads that don’t irritate you with blaring horns and expanse that is not dotted with colonies of new holiday homes for city slickers.

Trilok, my driver, is a native from the village. He takes the road less travelled to reach the village. Except for an occasional public transport, there was not much traffic along the route. The village houses are scattered down the hillside, surrounded by farm lands. Step farming makes the area look prettier if not less. Groups of chattering school girls visibly happy to head home make us slow down from time to time. They seem surprised at the sight of a vehicle, but they couldn’t really care less.

“This road is used only by the locals, that is people from nearby villages only,” Trilok’s voice breaks into my reverie and puts their astonishment in perspective. “We have a good school in the village, but for higher studies, children have to move to bigger towns and cities,” he tells me.

There is a clear pride in political awareness about the locals of Parvada. They like to make active decisions regarding the welfare of the village and Panchayat is a positive force here. The villagers are hardworking, friendly, organised and cleanliness freaks, he tells me. It is a no-polythene space here and people are proud to extend support to green movement. Most work as farmers or run taxis to support their families and are mostly content with what they are doing.

The red and green bungalow

Before I realise, I am at Parvada Bungalows, a quiet little homestay along the road in Parvada a little short of Kasia Lekh  near Mukteshwar. Surrounded by budding orchard with apple, plum and apricot trees, it’s a quiet little retreat. Meant to be home to Sanjay and Vasudha Sondhi, Parvada Bungalows turned homestay on the popular demand of the couple’s friends. “It was a choice between having a nicely aired, lived in place open to people looking for a quiet stay; Or a holiday home with a caretaker in place — we chose the former”, shares Sanjay.

The homestay has three cottages and two duplex rooms, other than a well furnished library and a yoga room. My room faced the little temple at the entrance and the view extended to the village across the road. Honeyed sunlight beamed brightly through the glass windows, tempting me to give everything up and park myself on the easy chair with a book. Hunger got better of me and I found myself in the dining within 10 minutes of my getting there!

Homestyle Kumaoni thaali was treat to have. Complete with Jhingora ki kheer, Bhatt ki daal, pahadi raita and bhaang jeera ki chutney, served with buransh ka sharbat (stocked from earlier summer) on the side, the lunch worked as the fastest way to slip into slow life. I clearly was not moving after this!

Left to me, I really would not budge from a place like this. Except, of course, to explore the village, make friends with the locals or just perch at a quiet spot with a good view and book in my hand. You really don’t get to hear the bird song much these days.

But to those who want to venture a little farther, there is the visit to the over 350-year-old Shiva temple called Mukteshwar dhaam, a hike through the IVRI (Indian Veterinary Research Institute), visit to Baalugaad Falls (a robust stream nearby, that was once frequented by bears), Kainchi Dhaam or even older over 2,500 year old cluster of temples at Jageshwar. You can well plan your itinerary to cover one or two places a day.

For those, like me craving for a slow life for a quick recharge, I’d suggest spend more time walking around the place or interacting with the locals. The high point of my stay was an afternoon of interaction with ‘Seekho’ ladies.

From learning to self-sustenance

‘Seekho’, I learnt during my stay there, is an endeavour by the homestay owners to share vocational skills with the local women so they learn something new as vocation. Interestingly, the area is known for several organised non-government groups encouraging the locals to create small businesses that make organic and sustainable products for consumption. Kilmora has emerged as one big small business put together by women who make organic bath and beauty products; sell organic produce, woolen weaves and food products.

On the same lines, ‘Seekho’ encourages women from the village to come together and learn new designs in knitting and embroideries so they can create avenues for additional incomes to the family. The owners of the homestay, help them sell their wares by setting up a haat (pop-up market) from time to time and promoting the items for corporate gifting. It was fascinating to see Carron, the manager at the Bungalows guide the women to learn a new design between gossip and singing session.

After a long time, I too found myself struggling to hand-knit a cable pattern for a scarf with help from a  shy 18-year old who just finished her class 10. There was an unmistakable pride in her eyes as she subtly showed off her skill and speed at the task at hand.

Like many others, I promise to practice the new learning to perfection once back. I don’t know how true I would stay to that, but I’m back in the city, fresh with the dose of Vitamin green and energy recharge. The place has worked its magic.