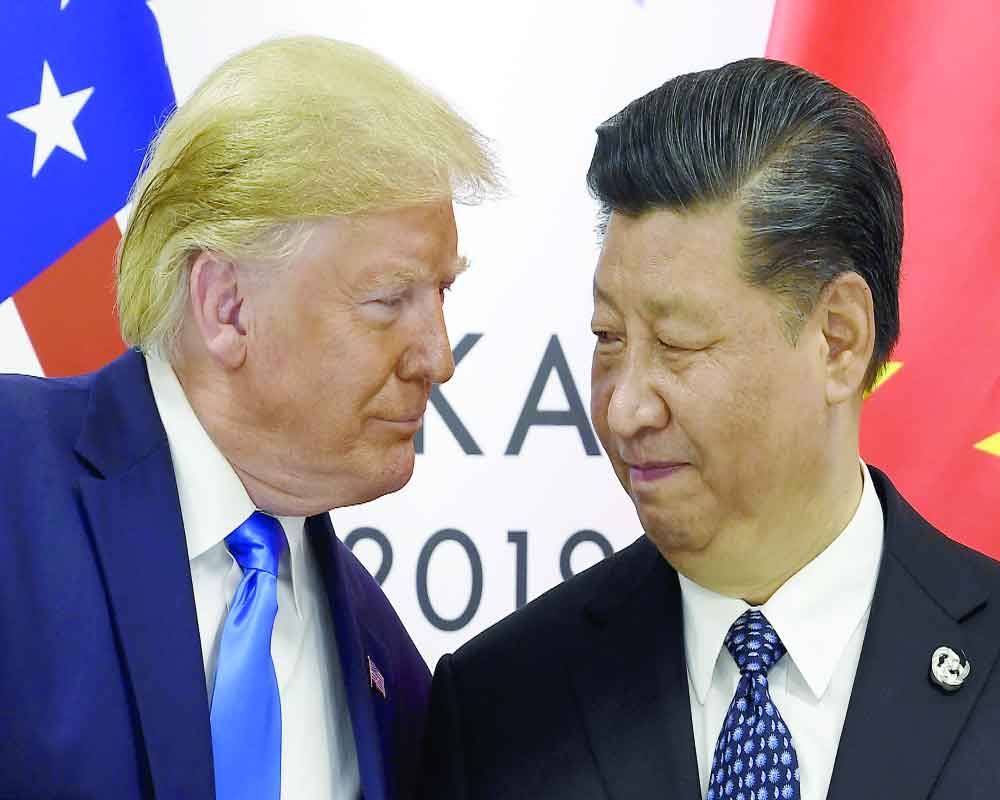 There is no agreement on an enforceable deal. While  China wants the Trump Administration must lift punitive tariffs on Chinese products soon after they ink an agreement, the US desires to keep Beijing on a short leash

The US-China trade war that has grabbed the headlines for over a year now is set to escalate as US President Donald Trump on Friday retaliated to Beijing’s announcement of new tariffs on American goods. Trump announced raising of tariffs on Chinese goods and ordered American companies to shift their business from China. Trump’s announcement came a day after China’s Ministry of Commerce spokesman Gao Feng, while reiterating Chinese threat of “corresponding countermeasures”, on August 22 said, “We hope the United States and China can meet each other halfway and find a solution.”

On August 23, hours after Beijing said it would hike tariffs on $75 billion in US imports, Trump retorted by announcing hike in tariff on $300 billion Chinese goods from 10 per cent to 15 per cent. The Office of the US Trade Representative said existing tariffs on another $250 billion in Chinese imports would go from 25 per cent to 30 per cent on October 1 after receiving feedback from the public, according to a report by AP. “I have no choice. We’re not going to lose close to a trillion dollars a year to China… Tariffs are working out very well for us. People don’t understand that yet,” Trump said.

Beijing has accused the Trump Administration of bullying tactics and economic intimidation. In fact, Trump’s one of the first orders as the US President was to launch a full-scale investigation into Chinese trade policies, China believes. Trump accused China of manipulating their currency and indulging in unfair trade practices. The bitter charge ensued into slapping of tariffs on Chinese goods entering America, and the resultant retaliation by China.

Till now twelve rounds of talks between the US and China have failed over how to enforce a deal. The next negotiation is scheduled for September in Washington, after the last round of talks in Shanghai in July ended in deadlock.

Although in a lopsided trade balance, China doesn’t have much to retaliate in the form of tariffs. Beijing has tried to exert pressure on the US by not approving customs clearance for US companies in China.

Defending Beijing’s action, the State Council Information Office of the People’s Republic of China issued a White Paper — released by the official Xinhua New Agency after the Communist nation declined the US invitation to hold talks to try to resolve the ongoing trade dispute —outlining the widening gap between China and the United States in light of the ongoing trade war. The paper argued that economic ties have been instrumental in improving the stability, peace and prosperity of both the nations. However, the current trade disruptions, solely initiated by the United States according to the Chinese Government, have a negative impact on the global economic order. It also hinted at the Chinese willingness in resuming trade talks that are mutually beneficial and trustworthy upon the condition that the Chinese principles are not compromised.

The paper pointed out that China was also responsible for the growth in employment, and revenue generation in the United States. By highlighting that the trade war is responsible for having increased production costs, and that domestic price hikes in the United States was leading to a negative impact on the American economy, the Chinese Government aims to convey that Sino-American trade and economic relations are mutually beneficial rather than being advantageous for America.

Providing a detailed perspective on the global impact of the trade war, the Chinese White Paper highlights instances where the United States back-tracked on its promises, proving to be an unreliable negotiator. It also quashes claims of intellectual property theft and underscores China’s efforts at establishing credible communication and mutual benefit. This document serves the domestic purpose of stressing the need to respect “sovereign affairs” as a prerequisite for further talks, and a purpose of communicating the Chinese position internationally.

The White Paper states that the United States has been indulging in protectionist measures since 2017 and has been coercing countries into accepting their demands. With the onset of the trade war, from early 2018, the United States has damaged its reputation, investment and trade. Not only has it been responsible for the drop in Chinese exports to the US, it has also caused a global economic slowdown. The Chinese State Council repeatedly insisted that the tariffs levied on the United States are exclusively a retaliatory measure taken by the Government for protecting the dignity and interests of their people; and that they hope to resolve these issues via dialogue and negotiations. However, if its principles are disrespected, China is prepared to go to war.

Incidentally, the United States has accused China of changing the text under negotiation after the latest round of dialogue. Chinese response to this allegation was that it was common to make adjustments and new proposals when talks are underway, and that this was not a new practice given that the United States has repeatedly indulged in the same. Since the founding of the People’s Republic of China in 1949 and the introduction of market reforms in 1979, China’s growth has seen an upward trajectory and historical records support their claims. The United States’ observation of the country is purely negative, especially in terms of the theft of intellectual property rights (IPR) and technological innovation, leading to a back and forth relationship of levying tariffs and restrictions.

Highlighting the disadvantage the trade restrictions are posing to both the nations and the rest of the world, the People’s Republic of China, in the White Paper, has called out the mistake the United States is making by equating the trade deficit with being taken advantage of. Beijing has also accused the United States of having undermined the authority of the multilateral trading institutions by breaching the fundamental World Trade Organization (WTO) rules, which in turn will threaten the global economic growth. According to the US Department of Commerce, in 2018 China was identified as America’s largest trading partner and source of imports, third largest export market, and a mutually beneficial ally in developing the spheres of tourism, culture and intellectual property rights.

Underscoring the instances throughout 2018 where the United States back-tracked on their commitments and levied sanctions, China strongly believes that the United States keeps changing its demands and wants more than what it is being offered. Beijing has also accused Washington of having used corruption and intimidation as tools to achieve their goals, which, according to China, will be responsible for the detrimental nature of their relationship. The Chinese Government has suggested that it is essential for both nations to mutually respect institutions and not cross the red line.

It is a well-known fact that China’s development is not a smooth process. Having said that, the country has also been perceived to be optimistic and open to learning and has shown willingness in turning risks into opportunities.

In the post-Mao era, it has advocated for dialogue and negotiations as an effective method for solving the challenges at hand.

(The writer is a student of International Affairs at the Lee Kuan Yew School of Public Policy, National University of Singapore)