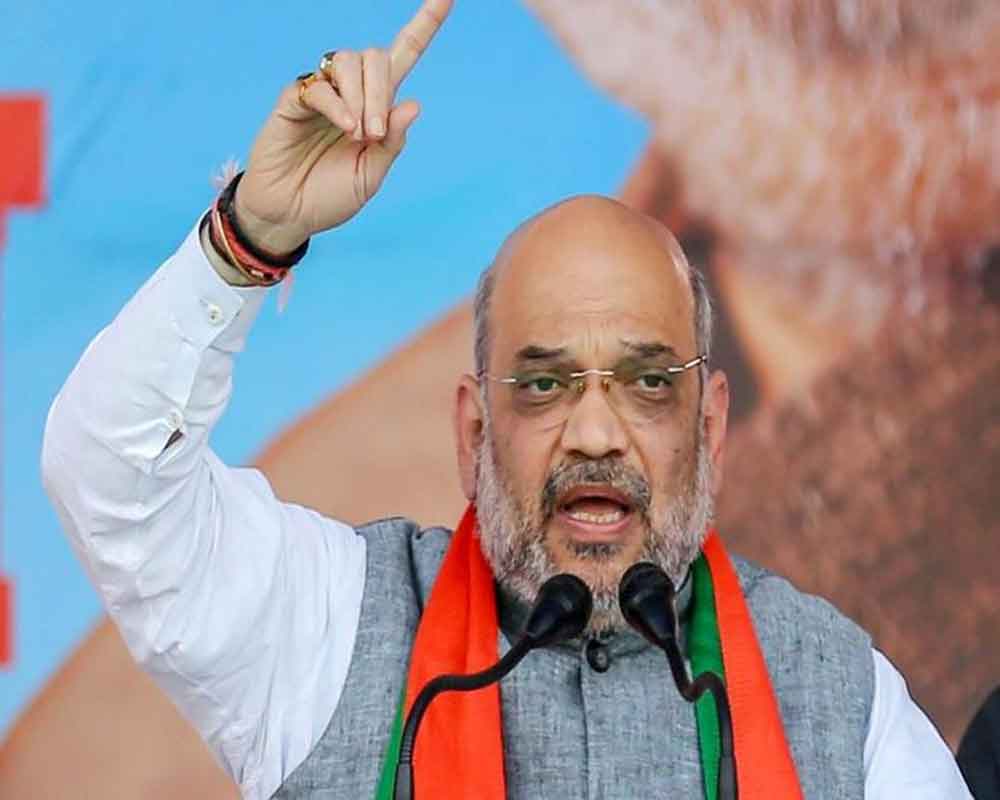 Taking a swipe at the opposition grand alliance for not naming the Prime Ministerial candidate, BJP chief Amit Shah Tuesday wondered how they expected to run the country without a leader if they came to power and said the nation would be safe from terror attacks only if Narendra Modi was once again installed in the post.

"Can Mahamilavat- Congress and JD(S) keep the country safe? Can they give a befitting reply to terrorism and Pakistan? They cannot keep this country safe.

To keep the country safe BJP has to come to power with Narendra Modi as Prime minister once again," Shah said addressing a rally at Davangere.

The BJP president he had travelled extensively across the country during the last four months and had only heard the slogans of 'Modi, Modi' and said the party had decided to strenghten the country by making Modi Prime Minister again.

"On the one side BJP and all parties of NDA are ready to face this election under the leadership of Narendra Modi. We have decided that once BJP gets majority Narendra Modi will become Prime Minister once again.

On the other side there is Rahul baba (Congress President Rahul Gandhi) and company. I ask them who their Prime Ministerial candidate is, they dont answer me," he said.

"...If their Mahamilavat alliance government is formed, Mayawati will become Prime Minister on Monday, Akhilesh Yadav on Tuesday, Wednesday-Deve Gowda, Thursday- Chandrababu Naidu, Friday- Sharad Pawar, Saturdey- Mamata didi and on Sunday the country will go on holiday," he added.

Shah was in Davangere to campaign for BJP candidate and former Union Minister G M Siddeshwara, pitted against H B Manjappa of Congress.

Noting that the biggest achievement of the Modi government was securing the county from terror attacks, Shah referred to the Pulwama terror attack which killed 40 CRPF jawans and said the government had given a fitting reply through airstrikes and 'decimated' terror camps by entering Pakistani territory.

Hitting out at the opposition which said dialogue was the best way forward with Pakistan, he said "Congress says talk to Pakistan, Sam Pitoda (Chairman of overseas wing of Congress) says talk to them, dont bomb them.

I want to ask people of Davangere, do we have to talk to terrorists who killed 40 of our soldiers? Do we have to bomb them or speak to them?

Warning Pakistan of a strong response on any 'misadventure,' he said "Friends ...BJPs policy is clear if goli (bullet) comes from Pakistan side, gola (bombshell) will go from here, eet ka jawaab pattar se diya jayega..." he added.

Taking a jibe at former former Jammu and Kashmir Chief Minister Omar Abdullah for his statement on separate Prime Minister for the state, Shah asked "Can there be two Prime Ministers in a country?"

Taking a dig at Congress-JD(S) coalition government in Karnataka, Shah alleged that Congress was indulging in corruption through remote control by making someone from JD(S), which won the least number of seats in the assembly polls last year, the Chief Minister.

Recalling that Karnataka Chief Minister had said that people of the state did not make him the Chief Minister, but Congress chief Rahul Gandhi and Sonia Gandhi who made him occupy the top post, Shah said, he (Kumarasswamy) should be ashamed for lowering the dignity of his office.

Highlighting the differences and disgruntlement within the ruling coalition, he said they cannot do good for Karnataka.