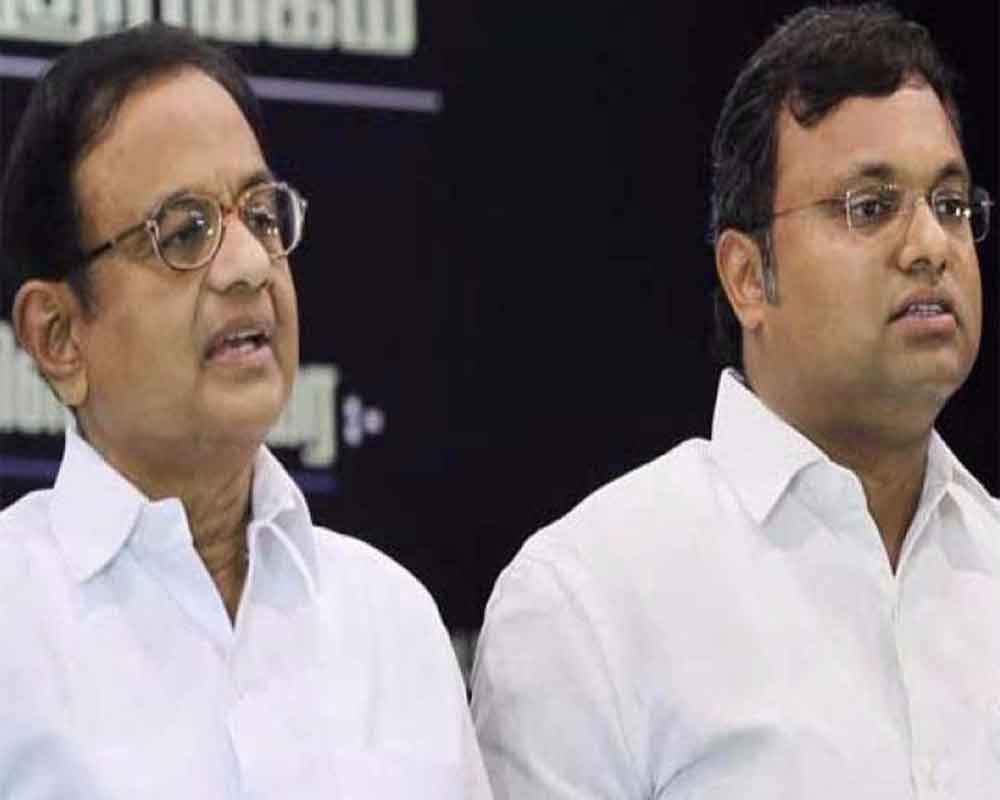 A Delhi court Monday extended till March 8 the interim protection from arrest granted to former Union minister P Chidambaram and his son Karti in the Aircel-Maxis scam cases filed by the CBI and the ED.

The Enforcement Directorate (ED) told Special Judge O P Saini that Karti Chidambaram has been asked by the agency to appear before it on March 5, 6, 7 and 12 for questioning in the cases.

The apex court had on January 30 asked Karti to appear before the ED on March 5, 6, 7 and 12 for questioning in connection with the INX Media and Aircel Maxis cases.

"Let the matter be fixed after March 12, since he has to appear on March 5,6,7,12, it said," ED, through Special Public Prosecutors N K Matta and Nitesh Rana, told the court.

P Chidambaram, who was present in the court, opposed the ED's request to adjourn the matter, saying it was delaying the case.

"Requesting both parties to expedite the matter but date is not fixed yet. Put up the matter for March 8," the judge said.

At this, the counsels for Chidambarams, senior advocates Kapil Sibal and A M Singhvi, requested to extend the protection granted to them, which was allowed by the court.

The case relates to alleged irregularities in grant of Foreign Investment Promotion Board (FIPB) approval in the Aircel-Maxis deal.

The CBI had earlier informed the court that the Centre has granted sanction to prosecute five people, including serving and former bureaucrats, accused in the Aircel-Maxis case including the Chidambarams.

The CBI had on November 16 last year informed the court that similar nod was procured for Chidambaram. There are 18 accused in the case.

Chidambaram and Karti were named in the charge sheet filed by the CBI in the case on July 19 last year. The agency filed a supplementary charge sheet before the special judge, who had fixed it for consideration on July 31.

The CBI is probing how Chidambaram, who was the Union finance minister in 2006, granted FIPB approval to a foreign firm, when only the Cabinet Committee on Economic Affairs (CCEA) was empowered to do it.

CBI and ED, in their replies to the anticipatory bail pleas of Chidambarams, had recently told the court that custodial interrogation of both the accused was required since various new materials have surfaced after filing of the charge sheet, alleging that they were not cooperating in the probe.

The father-son duo recently denied the allegations of both the agencies that they were evasive and non-cooperative during the probe in the case, and said the allegations against them were "unsubstantiated" and there was no need of their custodial interrogation.

P Chidambaram filed his anticipatory bail application in May last year. His protection from arrest has been extended from time to time.

The agencies have sought the custodial interrogation of both the accused, saying they have not been cooperating and, therefore, making it difficult to complete the investigation in a time-bound manner as directed by the Supreme Court.

The senior Congress leader and his son have come under the scanner of investigating agencies in the Rs 3,500-crore Aircel-Maxis deal and the INX Media case involving Rs 305 crore.

In its charge sheet filed earlier in the present case against former telecom minister Dayanidhi Maran, his brother Kalanithi Maran and others, the CBI alleged that P Chidambaram granted FIPB approval in March 2006 to Mauritius-based Global Communication Services Holdings Ltd, a subsidiary of Maxis.

The Maran brothers and the other accused named in the CBI charge sheet were discharged by the special court, which said the agency had failed to produce any material against them to proceed with the trial.

The ED is also probing a separate money-laundering case in the Aircel-Maxis matter, in which the Chidambarams have been questioned by the agency and their anticipatory bail is pending.