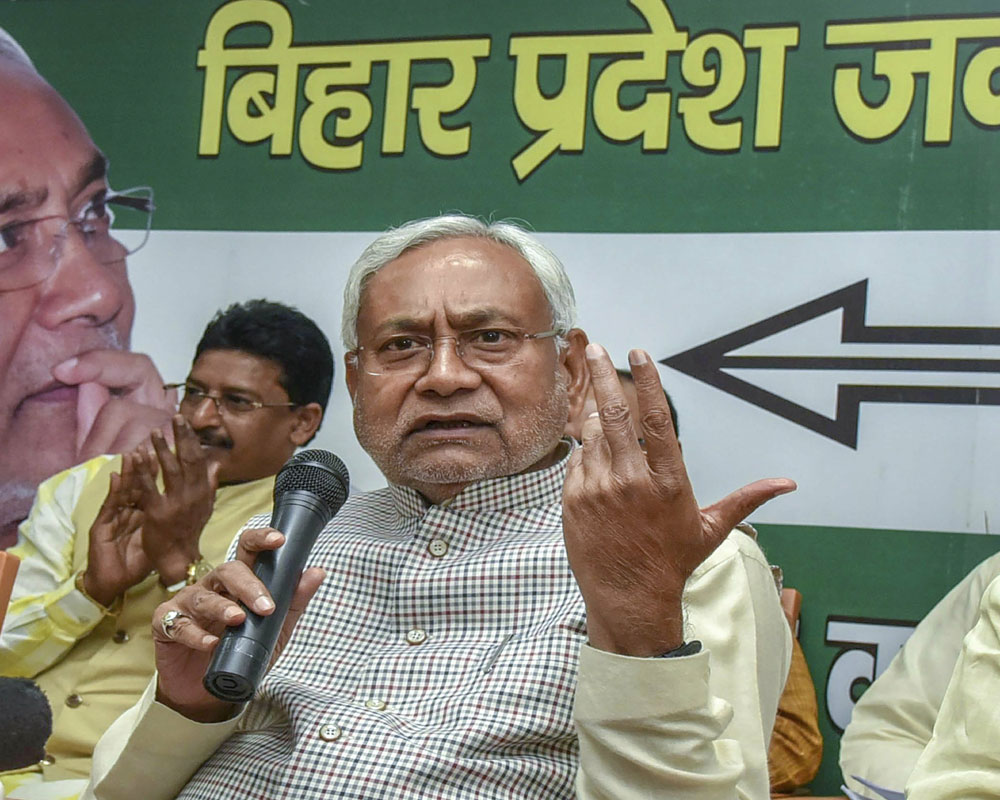 Bihar Chief Minister Nitish Kumar Thursday strongly opposed the demand for abrogating Article 370, amid the clamour for doing away with the special provision granting autonomy to Jammu and Kashmir in the aftermath of the Pulwama terror attack.

The assertion by Kumar, who is the national president of the JD(U), came at a time when a Public Interest Litigation has been filed in the Supreme Court with the request for scrapping the article and demands to this effect have been raised by a number of leaders of the BJP, his ally in the state.

We can never think in terms of abrogating Article 370. Our party's stand has been clear on this issue. There has been a terror attack and whatever action is required to punish those guilty besides preventing such incidents in future should be taken, Kumar told reporters here.

But this does not mean that Jammu and Kashmir should be deprived of a provision that has been in place, he added.

We can never support such a move, or even demands made to this effect, the chief minister said on the sidelines of a function organised by his party.

The JD(U) chiefs statement came barely a few hours after Union minister Giriraj Singh, a firebrand BJP leader, made a strong pitch for scrapping Article 370 at Jehanabad district in the state.

Singh also blamed first Prime Minister Jawaharlal Nehru for the situation prevailing in Jammu and Kashmir and claimed that the country was paying the price for the Congress' sin of withdrawing troops from the Pakistan occupied Kashmir (PoK).

Meanwhile, Kumar refused to comment on the reports of splurge of public money by RJD leader Tejashwi Yadav on a bungalow allotted to him when he was the deputy CM.

The son of former chief minister Lalu Prasad had vacated the house last week, more than a year after having lost the post, following a Supreme Court order, whereby he was also slapped with a fine.

O not drag me into such things. All you journalists here are much younger to me. When I say that it would not be proper for me to say anything, please try to understand, the JD(U) president said.

Interestingly, his current deputy Sushil Kumar Modi, a senior BJP leader, had on Tuesday taken media persons on a guided tour of the sprawling premises which he shall henceforth be occupying and lashed out at Yadav for having spent public money to decorate the bungalow in a manner that befitted 'Raja-Maharajas'.

Kumar also welcomed into his party, on the occasion, well-known city-based businessman Narendra Singh, whose son Mohit Prakash is associated with the JD(U)s students wing and is at present the president of the Patna University Students Union.

To a query as to whether the induction of Singh was yet another attempt to woo the upper castes, traditionally supporters of BJP or Congress, the chief minister remarked, I have been in this chair not because of any caste arithmetic but by virtue of the work done under my watch.

He also stressed on the need for youngsters taking part in active politics, saying the future belongs to them.

In a veiled dig at his arch rival RJD supremo Lalu Prasad, Kumar said gone are the days when Bihar used to remain enveloped in darkness. All villages in the state are now electrified and hence lanterns have become redundant.

The lantern is the election symbol of the RJD, which was ousted from power by the JD(U)-BJP combine in 2005.