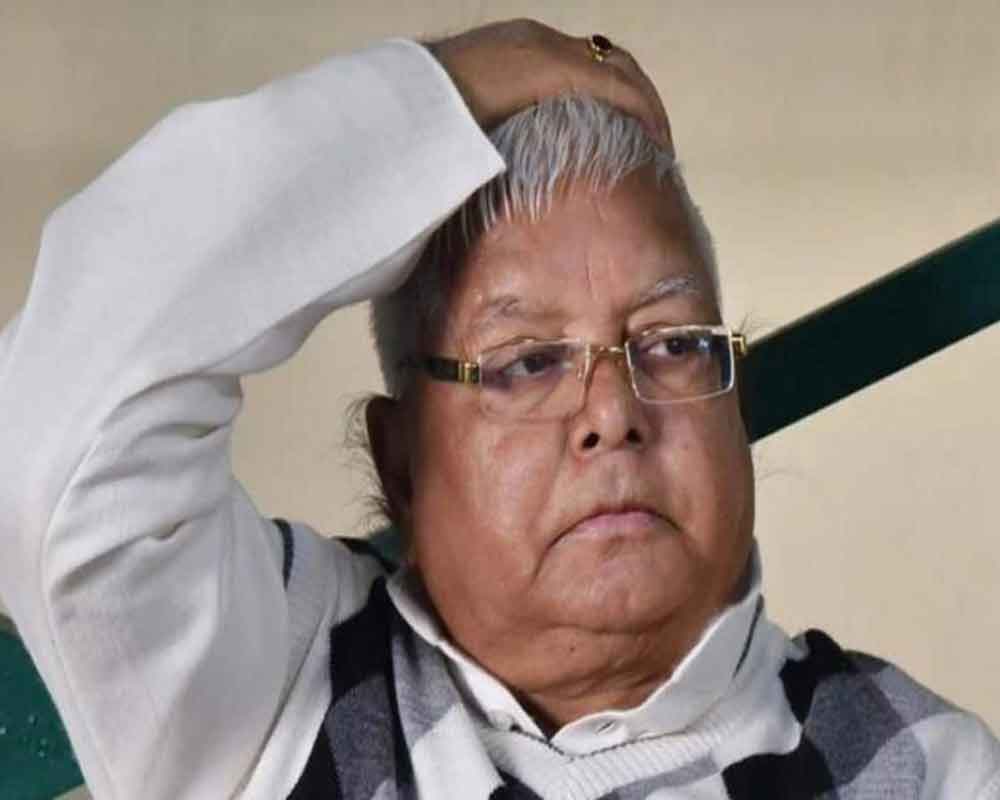 The CBI told a bench headed by Chief Justice Ranjan Gogoi that Yadav is likely to get involved in political activities and misuse the bail ahead of the upcoming Lok Sabha polls.

"It is, in the most humble and respectful submission of the investigating agency, a case where grant of bail would set a very wrong precedent in cases involving a serious corruption in high offices," CBI said.

"It is respectfully submitted that if these considerations are permitted to be raised by the convicted accused, even a businessman who is found guilty of corruption can seek bail on the ground that he wants to do his business in spite of gravity of the offence and the period for which he is convicted," it said.

The apex court, which will hear Yadav's bail plea on April 10, had asked the CBI to file its reply by today.

The CBI said that in any case Yadav has been in a hospital ward for over eight months and indulging in political activities.

"During the period in which the petitioner (Lalu Yadav) remained in hospital, he is not only granted a special paying ward with all facilities but he is virtually conducting his political activities from there which would be clear form the list of visitors," the CBI said in its reply.

It said Yadav claimed to be so unwell that he could not remain in jail and needed to be hospitalised, but is suddenly fully fit physically and has sought bail.

"It is submitted that simultaneous raising of pleas for bails on medical grounds and bail to guide the party and to carry out all essential responsibilities as a party president in ensuing Lok Sabha elections are mutually contradictory and manifest that in the garb of bail on medical ground the petitioner in essence wants to pursue his political activities which is impermissible in law," the CBI said.

It further said that Yadav seems to have created an impression that he is convicted for only 3.5 years and has already undergone substantial portion, which is  "misleading" and "factually incorrect".

It said the total period of sentence awarded to Yadav was 168 months for all four of his convictions, out of which he has undergone only 20 months, which was less than 15 percent of the sentence awarded.

"Thus as per his own averment the Petitioner (Yadav) does not qualify the 'half sentence theory' for seeking suspension of sentence and bail," CBI said.

Considering the gravity of the offence of corruption in public as well as the constitutional office which the petitioner abused and misappropriated huge amount of public money, and considering that the petitioner is to undergo 27.5 years of sentence (cumulatively calculated for all four convictions), the discretionary remedy of grant of bail is rightly refused by both the courts below, it said.

"The present case pertains to an economic fraud committed by the custodian of public administration. It is well settled that economic offences constitute a class apart. It is submitted that the present case involved a deep-rooted conspiracy and involved huge loss and misappropriation of public funds affecting the economy of the country as a whole and thereby posing serious threat to the financial health of the country," the CBI said.

It said that considering the magnitude of the offence, any relief granted by the court will entail "far reaching ramification" on the public confidence which it reposes on the criminal justice delivery system, of which sentencing was an important aspect.

The RJD chief, lodged in the Birsa Munda Central Jail in Ranchi, has challenged the January 10 verdict of the Jharkhand High Court dismissing his bail plea.

The three cases in which Prasad has been convicted are related to the over-Rs 900-crore fodder scam, which pertains to fraudulent withdrawal of money from the treasuries in the Animal Husbandry department in the early 1990s, when Jharkhand was part of Bihar.

The RJD was in power in Bihar with Prasad as the chief minister when the scam had allegedly taken place.

In the high court, the RJD supremo cited old age and poor health for grant of bail. Prasad (71) said he was suffering from diabetes, blood pressure and other ailments and that he had already obtained bail in one of the fodder scam cases.

He has been convicted for fraudulent withdrawal of money from the Deoghar, Dumka and two Chaibasa treasuries situated in Jharkhand.

He is currently facing trial in another fodder scam case pertaining to the Doranda treasury and has been undergoing treatment at the Rajendra Institute of Medical Sciences (RIMS) at Ranchi for the last few months.