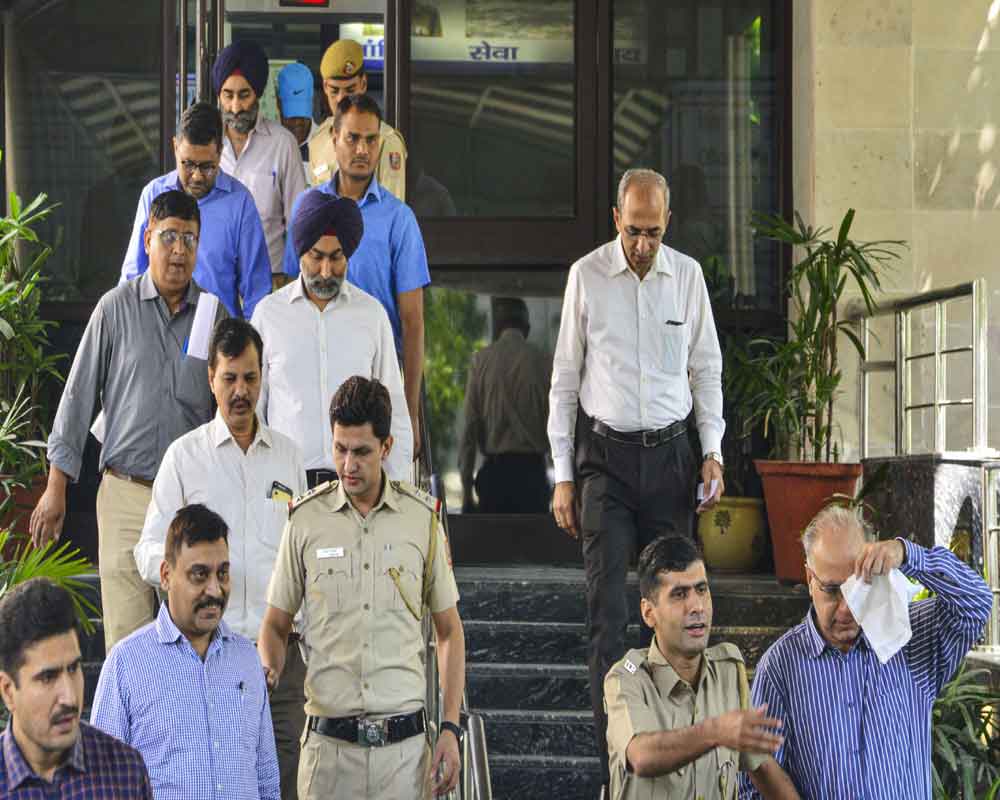 A city court on Friday sent two businessmen brothers Malvinder Singh and Shivinder Singh arrested in an alleged fraud case to 4-day police custody, observing their offence was of "very serious nature", even as the latter moved the Delhi High Court to quash the FIR against him.

While the Delhi High Court reserved the order on whether to issue notice to the police and the Centre on the plea of Malvinder to quash the FIR, a trial court sent him, his younger brother Shivinder and three others to police custody after they were arrested for allegedly misappropriating funds of Religare Finvest Ltd (RFL), causing it losses of Rs 2,397 crore.

The High Court also heard the applications filed by Radha Soami Satsang Beas (RSSB) head Gurinder Singh Dhillon and his family members that they do not owe any money to RHC Holdings Pvt Ltd, promoted by the Singh brothers.

The Economic Offences Wing(EOW) of the Delhi police formally arrested Malvinder Singh early Friday morning after detaining him at Ludhiana, Punjab, on the intervening night of Thursday-Friday. The others were arrested on Thursday.

Apart from Malvinder (46), Shivinder (44), the others named in the FIR are Sunil Godhwani (58), the former chairman and managing director of the REL, Kavi Arora (48) and Anil Saxena, who held key positions in the REL and RFL.

All five of them were on Friday produced before Chief Metropolitan Magistrate Deepak Sherawat who allowed their custodial interrogation by the EOW.

"The offence is of very serious nature involving huge amount of siphoning of money," the magisterial court said.

The judge said the police custody is necessary to "trace the trail of the cheated amount and find out the role of other persons who might have participated in the conspiracy and confrontation with the other officials of RFL and REL (Religare Enterprises Limited)".

RFL has accused them of diverting funds, claiming that loans were taken by Shivinder while managing the firm but the money was invested in other companies.

The police sought the custodial interrogation of the accused, saying it was necessary as they were allegedly involved in diversion of public money which needs to be tracked.

It further said that a lot of people are involved in the alleged cheating and misappropriation of funds.

The police also said the accused have to be confronted with other officials to ascertain the role of co-conspirators, adding the money trail found in the case was at an initial stage of probe.

Malvinder's lawyer told the trial court that the money was with Radha Soami head Gurinder Singh Dhillon but the police was not going after him since he had political connections and that his client was being made a soft target.

The lawyer said Malvinder had joined the probe and answered all the questions and his custody was not required.

He also told the trial court that he has given an affidavit before the high court saying the money was not with him.

Shivinder submitted that he was himself a victim and was ready to help and cooperate in the investigation.

The Dhillons filed the application following the high court's direction to deposit the amount due to RHC Holdings Pvt Ltd in connection with the execution of Rs 3,500-crore arbitral award won by Japanese pharma major Daiichi Sankyo against Malvinder and Shivinder Singh.

The Dhillons told the court that RHC Holding has made false claims that they owe money to the company.

While Justice Midha was hearing arguments on the Dhillons' plea, Justice Brijesh Sethi reserved his order on whether to issue notice to the Centre and the EO  on Malvinder's plea that only the Serious Fraud Investigation Office (SFIO) has the jurisdiction to initiate a probe into the allegations of fraud against him.

Malvinder's lawyers argued that the SFIO was already investigating the issue of diversion of funds on a complaint by Religare Enterprises Ltd (REL) and therefore, the EOW "could not have jumped the gun".

The lawyers said the SFIO had initiated investigation on February 17, 2018 on the direction of the ministry concerned.

The EOW opposed the contentions and argued that the SFIO was only given the mandate to investigate the REL and Fortis Healthcare and that a fresh notification would have to be issued by the Centre to allow it to probe the RFL, a subsidiary of the REL.

The contention was supported by the SFIO which said presently it has been directed by the government to investigate the REL and Fortis and not RFL which it cannot probe without prior approval.

The EOW on March 27 lodged an FIR against the Singh brothers and others under sections 420, 409 and 120(B) of the IPC on a complaint by Manpreet Singh Suri of the RFL.