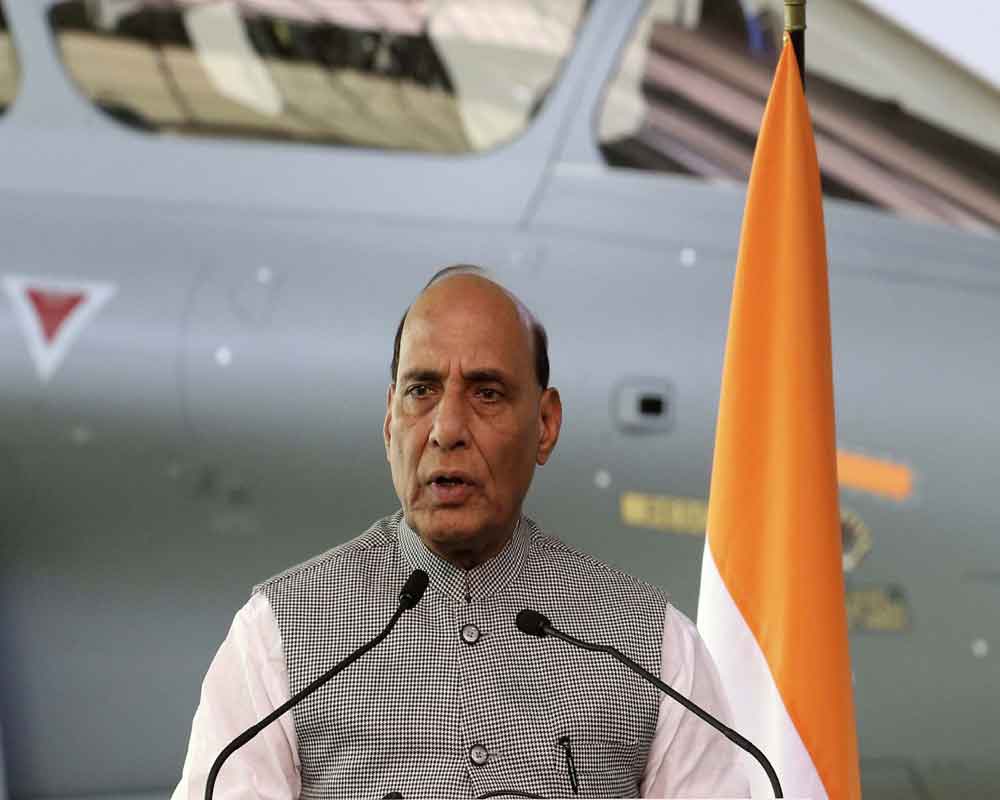 Defence minister Rajnath Singh on Wednesday said he had "fruitful deliberations" with his French counterpart during which they reviewed the full spectrum of the bilateral defence engagement.

Singh was received by a military guard of honour at Hotel de Brienne, the headquarters of the French Armed Forces ministry in Paris, on Tuesday night at the end of a packed day's schedule during which he received the delivery of the first Rafale combat jet for the Indian Air Force (IAF).

"Had fruitful deliberations with the French Minister of Armed Forces, Ms Florence Parly during the Annual Defence Dialogue in Paris," Singh tweeted on Wednesday after the meeting.

"We assessed and reviewed the full spectrum of our bilateral defence engagement," he said.

"This marks a new milestone in the Indo-French strategic partnership and indeed a new high in the bilateral defence cooperation. Such achievements encourage us to do more and that will be on my agenda when I meet minister Parly," said Singh, just before performing the 'Shastra Puja' on the new Rafale aircraft.

After performing the puja, he flew a sortie in it.

The minister is on a three-day visit to France, which will cover a tour of a facility owned by French multinational Safran – the company which produces the engines for the Rafale fighter jets.

He will conclude his tour with a meeting with captains of French business and industry around the merits of the 'Make in India' initiative, during which he will also extend a formal invitation for them to participate in the DefExpo to be held in Lucknow from February 5 to 8, 2020.

Singh had kick-started his busy schedule with a meeting at Elysee Palace with President Emmanuel Macron for talks described as "warm and productive", as both leaders resolved to take the India-France relationship to a higher level.

He was then flown for Merignac Airport in the nearby town of Bordeaux for a grand induction ceremony planned for the first of 36 Rafale combat jets, which are all scheduled to be delivered to India by around May 2022.

"This aircraft marks a massive enhancement in the Indian Air Force combat capability but that enhancement is not for attack purposes but as a deterrent for self defence. And, the credit for this milestone goes to Prime Minister Narendra Modi, whose decisiveness has made this crucial air enhancement possible today," the minister said after a 25-minute sortie in the aircraft.

Singh has said he expects the first 18 aircraft to be delivered by February 2021, with the remaining expected by April-May 2022.

The 36 high-precision Medium Multi-Role Combat Aircraft, which include 13 India-specific enhancements sought by the IAF, are destined for Ambala in Punjab and Hasimara in West Bengal.

"In terms of guarding of two borders, these aircraft will certainly provide the potent air defence we require. They are by far the most potent platform for our air defence," explained Air Marshall Harjit Singh Arora, the Vice Chief of Air Staff who accompanied the minister at the induction ceremony on Tuesday, which also marked the Air Force Day.