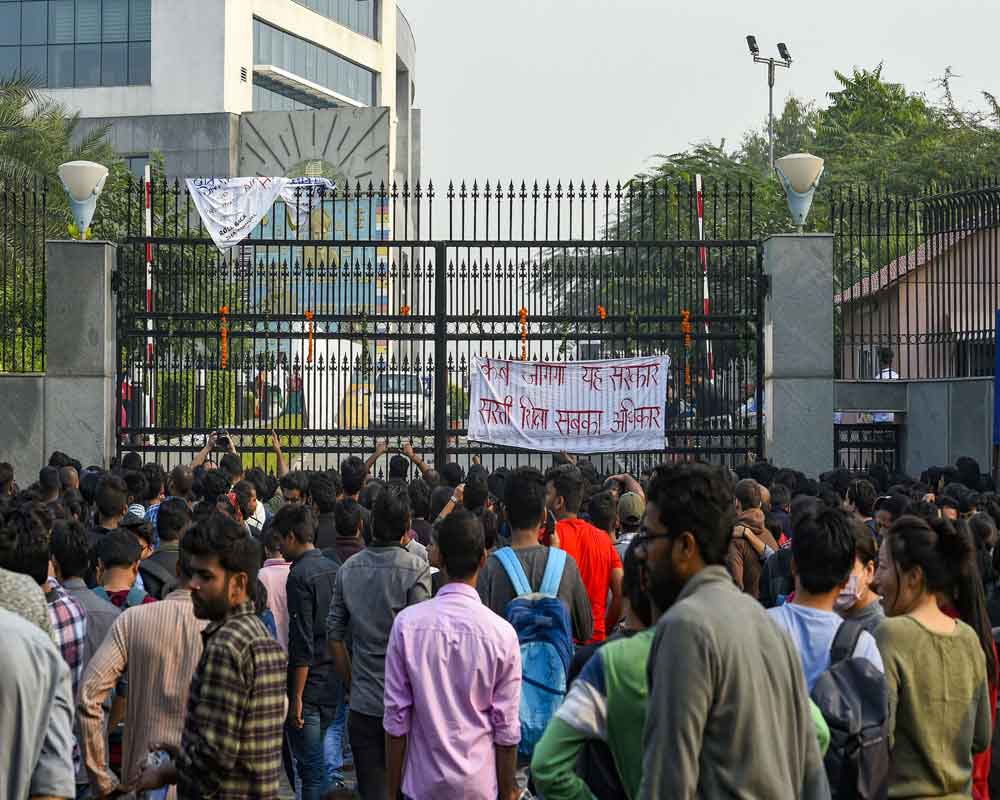 Thousands of students of the Jawaharlal Nehru University (JNU) clashed with police on Monday as their protest over fee hike on the varsity's convocation day escalated, forcing HRD Minister Ramesh Pokhriyal 'Nishank' to stay inside the AICTE premises for over six hours.

The students were protesting near the All India Council of Technical Education (AICTE), the venue for varsity's third convocation.

The protests started in the morning and escalated as the day progressed with angry crowds of students trying to push through a wall of anti-riot police personnel to approach the venue.

Several blockades put up by the police were also broken by the protesting students, who started their march towards the AICTE, about 3 km away from the university's south Delhi campus, around 11.30 am.

They were stopped a short distance away from the AICTE auditorium, where Vice President M Venkaiah Naidu was addressing the university's convocation.

Water cannons were used to disperse the protestors and police said some of the students were detained. Top brass of the Delhi Police were at the site to handle the situation.

Barricades were also placed outside the north and west gates of the JNU campus, as well as on the route between the AICTE auditorium and the university at Baba Balaknath Marg and nearby areas, a police officer said.

The angry students raised slogans against the varsity's vice chancellor and also the Delhi Police.

The students are demanding withdrawal of the draft hostel manual, which they claimed has provisions for fee hike, dress code and curfew timings.

The gates of the AICTE were locked and security personnel were stationed in and outside the premises.

While Naidu left the venue after attending the convocation, the HRD Minister was stuck inside for over six hours forcing him to cancel two scheduled events later in the day. The minister was able to leave the premises around 4.15 PM.

"The situation has been handled. Students met the minister and he assured them that their concerns will be addressed," a senior HRD Ministry official said.

An officer said JNUSU president Aishe Ghosh and vice president Saket Moon were asked to talk to the students to make way for the minister. Police requested them to move from the gate, but they refused.

The JNUSU office-bearers later met 'Nishank' who assured them that their demands would be looked into. They, however, were not able to meet the VC and raised slogans "we want V-C".

"The VC is destroying the varsity. We have made several attempts to meet him in campus, but there has been no fruitful result," Ghosh said.

Around 15 to 20 students who were graduating were sitting inside the auditorium main gate in solidarity with the protestors.

"Historic day for us that we broke barricades, reached the convocation venue and met the minister," Ghosh said.

"This could happen because we were united. This is not the end of our movement. We urged the HRD minister to ask the V-C to have a dialogue with the students. It is due to him that things have come to be like this," she added.

Ghosh claimed that the HRD minister has promised that students' union would be called for meeting to the ministry.

"We will have to ask the executive council members to reject the hostel manual in its upcoming meeting on Wednesday," Ghosh said.

Students wanted to meet the vice chancellor and demand withdrawal of the draft hostel manual.

A protesting student said, "The university administration's policies are against students who are from marginalised sections of the society. The hostel fee has been increased to 300 per cent. Where will the students stay and study if this happens with us."

Some students attending the convocation also shouted slogans from inside the AICTE gate even as their parents, who came here to attend the ceremony, were stuck due to the protest.

The protest is part of the agitation against the hostel manual and several other issues like restrictions by the administration on entry to the Parthasarathy Rocks -- a hillock inside the campus, attempts to lock students' union office, according to the students.

The students' union has been on a strike against the draft hostel manual, which was approved by the inter-hall administration. They have said the strike would not end until the hostel manual is withdrawn.

Traffic came to a standstill around the area due to the protests.