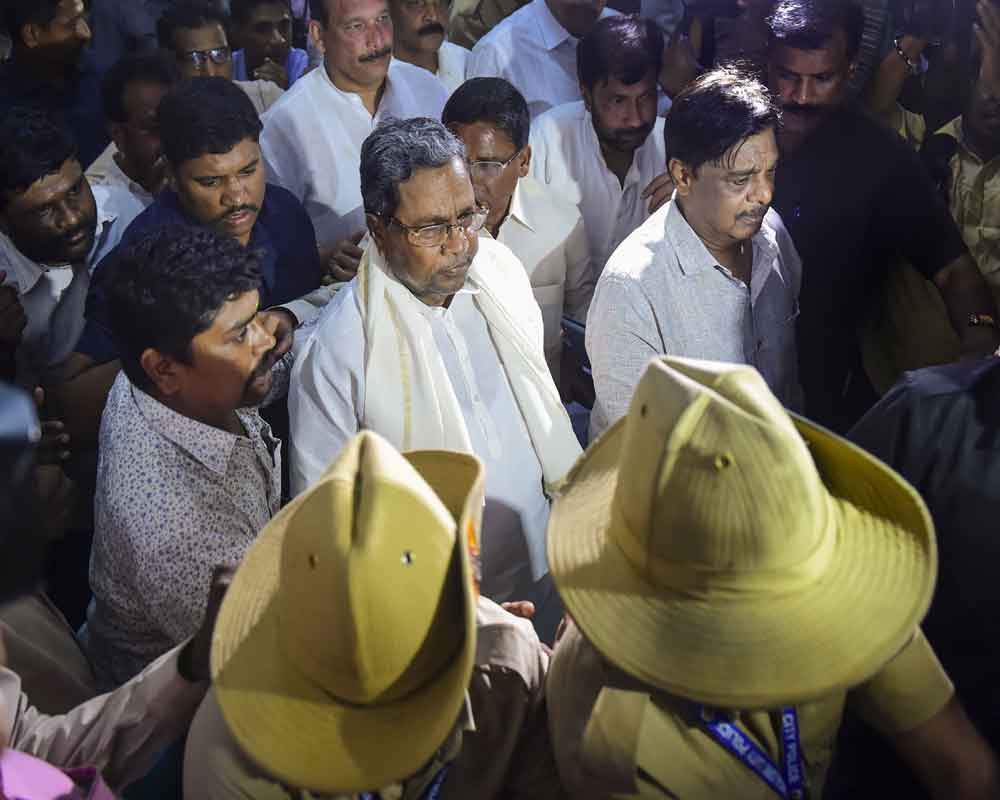 As many as 10 Karnataka rebel MLAs, who were camping in Mumbai, arrived here by two special flights, hours after the Supreme Court allowed them to meet the Assembly Speaker to convey their decision to resign.

The MLAs boarded a luxury bus from the HAL airport and proceeded towards the Vidhana Soudha, the state secretariat.

While 10 of them arrived from Mumbai, one disgruntled Congress MLA Munirathna joined them at the Vidhana Soudha and went inside the Speakers chamber along with them.

Of the 16 MLAs who had resigned, 11 reached the speaker K R Ramesh Kumars office to tender their resignation afresh.

The top court earlier asked the Speaker to decide "forthwith" on Thursday about the resignation of 10 rebel Congress-JD(S) coalition MLAs, allowing them to meet him at 6 pm.

A Bench headed by Chief Justice Ranjan Gogoi said the decision taken by the Speaker has to be intimated on Friday when the court takes up the matter again.

The bench, comprising Justices Deepak Gupta and Aniruddha Bose, also directed the Karnataka DGP to provide protection to the 10 MLAs from the airport to the Assembly after their arrival from Mumbai.

Police had made tight security arrangements at the Vidhana Soudha, and created a 'zero traffic corridor' to enable the MLAs reach the Speaker's office well on time.

"I had not prevented them (disgruntled MLAs who resigned) from coming. I dont know why the hell they went to the supreme court to meet me," Kumar told reporters outside the Vidhana Soudha before leaving for lunch.

"There was no need for them (MLAs who resigned) to approach the Supreme Court and get me an advice that I should meet them. They could have willingly come here. That itself shows the whole thing is murky."

He also refuted allegations that he declined to meet any legislator.

To a question, the speaker said the apex court has asked him to take a decision but it has not directed him what decision has to be taken.

BJP MLA M P Renukacharya alleged that the police were preventing them from entering the Vidhana Soudha.

The police have already clamped prohibitory orders under section 144 of the  Criminal Procedure Code, restricting the gathering of more than five people and any form of protests within the two-km area around the Vidhana Soudha.

The MLAs were camping at a Mumbai Hotel since Saturday evening after resigning as legislators and withdrawing support to the 13-month-old government in the southern state.

High drama was witnessed Wednesday as senior Congress minister in Karnataka, D K Shivakumar, was prevented from entering the hotel where the MLAs were staying.

Police detained Shivakumar and sent him back to Bengaluru after the legislators informed the Mumbai police commissioner that they faced threat from the minister.

The resignation of 16  MLAs (13 from Congress and three from JDS) has pushed the coalition government to the brink of collapse.