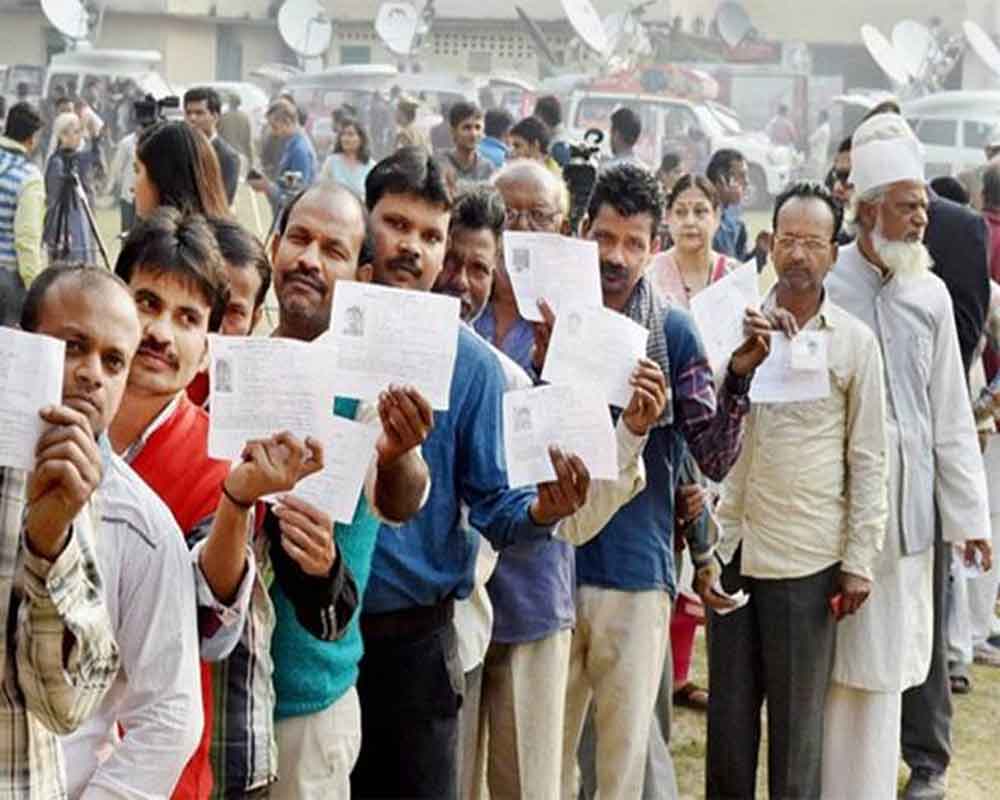 Polling was underway for the bypolls to four assembly seats—Phagwara (reserve), Jalalabad, Dakha and Mukerian in Punjab with up to 48.52 per cent voting in these constituencies till 3 pm.

Polling began at 7 am and will continue till 6 pm, officials said.

Around 7.76 lakh voters are eligible to decide the fate of 33 candidates. The results of the elections will be declared on October 24.

Till 3 pm, the maximum polling percentage was witnessed in Jalalabad at 57 per cent, followed by 50.8 per cent in Dakha and 48.11 per cent in Mukerian.

There was no report of any untoward incident in these four assembly segments, they said.

The polling in the morning began at a slow pace but it started picking up as the day progressed.

In the last elections, while the SAD-BJP combine had bagged two of the four assembly segments, one each was won by the Congress and the Aam Aadmi Party (AAP).

This time, the main contest is between the Congress and the SAD-BJP combine. The ruling Congress would like to maintain its winning momentum in the bypolls to four assembly seats while the Shiromani Akali Dal-Bharatiya Janata Party alliance and AAP would also hope to revive their political fortunes.

While the Shiromani Akali Dal (SAD) is contesting the Jalalabad and Dakha seats, its ally BJP has fielded candidates in Phagwara and Mukerian.

On the Dakha seat, the Congress has fielded Sandeep Sandhu, political secretary of Chief Minister.

The SAD nominee from the seat is former MLA Manpreet Singh Ayali.

Meanwhile, the Election Commission, in its orders on October 20, issued directions that the Deputy Inspector General of Ludhiana Range would take over supervision of the model code conduct and other security measures from SSP (Rural) in Dakha assembly constituency.

The commission has also directed the DIG to keep a watch over the activities of SSP (Rural) in Ludhiana.

The Akali Dal has lodged a complaint against the SSP (Rural) and sought that he be replaced, SAD senior vice-president Daljit Singh Cheema said on Monday.

In Phagwara (reserve), the main contest is between Congress candidate and former IAS officer B S Dhaliwal and BJP's Rajesh Bagha.

Besides, the AAP, BSP and the Lok Insaaf Party have also fielded their candidates.  Congress nominee Dhaliwal was issued a show cause notice for allegedly wearing a scarf with party symbol printed on while casting his vote at a polling booth.

Those replaced included Presiding Officer Charanjit Singh and his supporting staff, he said.

SSP Satinder Singh confirmed that the security personnel including sub-inspector deployed at the said booth were also replaced.

This followed a complaint that they had saluted Dhaliwal, he said.

The Phagwara seat fell vacant after sitting MLA Som Parkash was elected to the Lok Sabha from Hoshiarpur.

In Jalalabad, considered as an Akali bastion, there is a straight contest between SAD's Raj Singh Dibipura and Congress' Raminder Singh Awla.

The Jalalabad seat fell vacant after sitting MLA and SAD chief Sukhbir Singh Badal was elected to the Lok Sabha from the Ferozepur parliamentary segment in the 2019 general election.

The Congress nominee is Indu Bala, the wife of the late Congress MLA Rajnish Kumar Babbi, whose death necessitated the byelections.

Seven companies of paramilitary forces have been deployed in four assembly segments, a poll official said.

In the 117-member Punjab Assembly, the Congress at present has 77 legislators. The SAD has 13 MLAs while the strength of AAP legislators is 19.

The BJP and the LIP have two MLAs each.