SC allows 10 rebel K'taka MLAs to meet Speaker, asks him to take decision during the day

SC allows 10 rebel K'taka MLAs to meet Speaker, asks him to take decision during the day 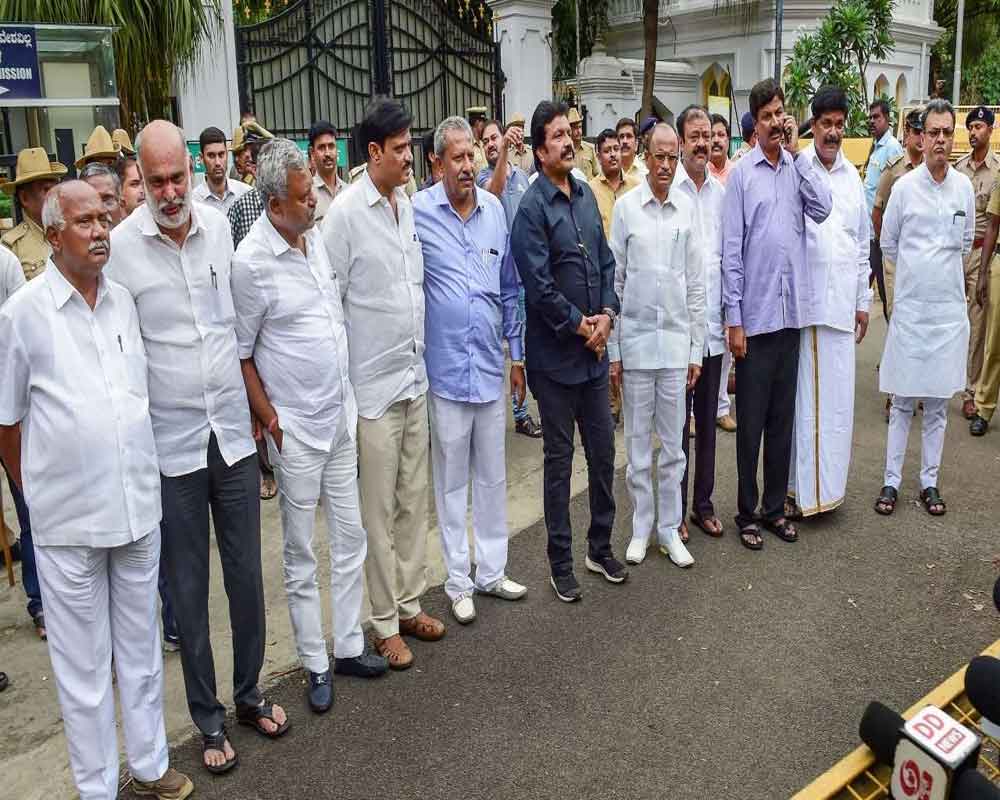 The Supreme Court Thursday allowed 10 rebel MLAs of the Congress-JD(S) coalition in Karnataka to meet the assembly Speaker at 6 pm to convey to him their decision to resign.

A bench headed by Chief Justice Ranjan Gogoi asked the Karnataka Assembly Speaker to decide on the resignation of the MLAs during the course of the day.

The bench, also comprising Justices Deepak Gupta and Aniruddha Bose, said the decision taken by the Speaker has to be intimated on Friday when the court takes up the matter again.

The apex court also directed the Karnataka DGP to provide protection to the 10 MLAs from Bengaluru airport to the assembly after their arrival from Mumbai.

At the outset, the apex court made it clear that it was passing orders on the 10 MLAs who were before it and not the others.

The 10 rebel MLAs had moved apex court alleging that the Karnataka Assembly Speaker was not accepting their resignations.

Senior advocate Mukul Rohatgi, appearing for the MLAs, submitted that there is a startling state of affairs in the Karnataka Assembly where 15 MLAs want to resign but the Speaker is not accepting their resignations.

He submitted that on July 6, when some rebel MLAs went to submit their resignations, the Speaker left his office through the back door.

Rohatgi also said one of the rebel MLAs was manhandled when he tried to reach the Speaker's office on Wednesday.

He said the Karnataka Assembly will meet on July 12, but before that the ruling coalition has moved a disqualification application against the rebel MLAs.

"Instead of ordering for the floor test, attempt is made to disqualify the rebel MLAs. We want to resign and go to the public and seek re-election," Rohatgi submitted on behalf of his clients.

When the senior advocate said 15 MLAs have already tendered their resignations, the bench said "we will take note of only ten MLAs who are before us".

As Rohatgi narrated the sequence of events from July 1, the bench orally observed "nothing surprises us".

The senior advocate also reminded the bench about a May 2018 hearing when the issue of government formation in Karnataka after the state assembly elections had reached the apex court.

He said like last year, the court can direct the Speaker to conduct a floor test.

Rohatgi said there is total ruckus in both Bengaluru and Mumbai, where the rebel MLAs are staying.

He submitted that in view of such incidents, there was a need for police protection for the rebel MLAs for their transit from Mumbai to Bengaluru.

In their petition, the MLAs have alleged that the Speaker was protecting the government, which is in minority now.

The MLAs have further sought a direction that the Speaker be restrained from proceeding with the application for their disqualification.

"Acting in a concerted manner, the Congress party has filed a petition before the Speaker seeking disqualification of the MLAs who have resigned. Needless to state, the disqualification proceedings are completely illegal and without any cause of action," they have said.

"The whole idea is to disqualify the petitioners and under threat of disqualification, allow the minority government to function without the support of majority in the House. It is submitted that the actions of the Speaker are arbitrary and unreasonable and violative of the Constitution," the plea has said.

They have said resignation is their fundamental right and their decision is based on the issue of principle and is in public interest.

The plea has claimed that the Speaker, acting in an arbitrary and illegal manner, was seeking to "frustrate the right" in favour of the petitioner.

It has said denial of such a right was destructive of the principles of democracy and hence violative of the basic structure of the Constitution.

The assembly Speaker had held on Tuesday that the resignations of eight out of 13 rebel MLAs of the ruling coalition were not in order.

The Congress has sought the intervention of Speaker K R Ramesh Kumar in disqualifying its rebel legislators and accused the BJP of using money power to lure its members. The BJP has denied the charge.

Thirteen MLAs -- 10 of the Congress and three of the JD(S) -- submitted their resignation to the Speaker's office on July 6. Another Congress MLA, R Roshan Baig, resigned on Tuesday.

With the support of two independents, who resigned on July 8, the BJP has 107 MLAs in the 224-member House, where the half-way mark is 113.

If the resignations of the 14 MLAs are accepted, the coalition's tally will be reduced to 102. The Speaker also has a vote.