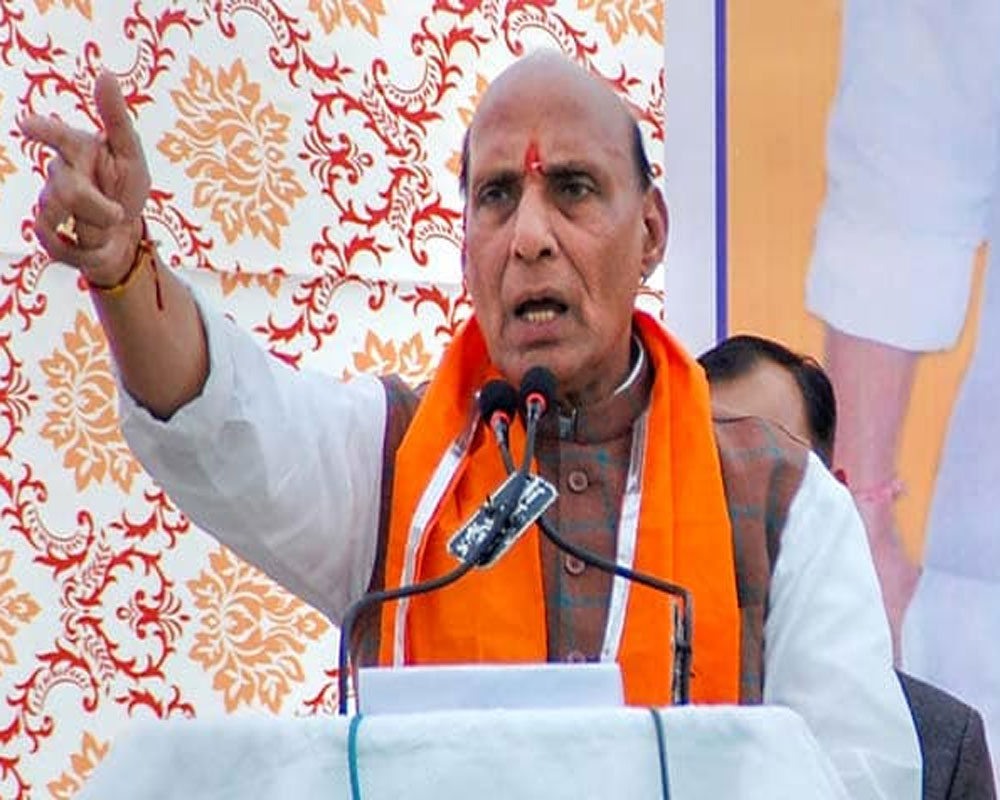 Union Home Minister Rajnath Singh Tuesday asked Pakistan to stop promoting terrorism from its soil and warned India would exert so much pressure that Islamabad will be forced to take action against terror activities.

At the same time, Singh said India was ready to offer assistance to Pakistan if it alone is not able to stop terror activities from its soil.

Addressing an election rally here, the senior BJP leader said earlier India was considered a weak nation, but that notion has now changed in the entire world after Narendra Modi government came to power in 2014.

"India is no longer a weak country and has emerged a strong nation," he said.

You have seen in Uri (September 2016), some terrorists from Pakistan killed 17 of our soldiers in their sleep and after that (terror attack) our Prime Minister took a decision.

And our soldiers crossed the Line of Control and launched a surgical strike on terror launch pads and eliminated them (terrorists), Singh said.

Referring to the February Pulwama attack in which 42 CRPF personnel lost their lives, the Home Minister said "the fidayeen terrorists are trained in Pakistan

Following the incident, the IAF carried out air strikes inside Pakistan and succeeded in killing a large number of terrorists.

I would like to tell Pakistan that it has to desist from its act and has to stop training terrorists.

"Terror activities should not happen from Pakistan and if Islamabad thinks it alone cannot be able to stop terror activities then it can seek assistance from India and it will be ready to assist.

But, terrorism has to end from Pakistan soil, he said.

India will exert so much pressure and take so many measures that Pakistan will be forced to act to stop and spreading terror activities from its soil, Singh warned.

On the economic front, Singh said India has become the fastest growing economy and it is now being acknowledged as a powerful nation across the world.

India is becoming a world power". We will be among the three biggest economies in the world by 2028.

He appealed to the people of Telangana to vote for BJP Lok Sabha candidates in the upcoming Parliament elections.

You may have elected TRS in the December 2018 Assembly, I have no complaints, but now vote for BJP candidates.

TRS will not be able to make government in Delhi because it is a state party and hence, I appeal to you to support BJP candidates in the polls and ensure return of the BJP-led NDA government at the Centre, Singh said.

Comparing the performance of the NDA government with the previous regime, the Home Minister said the Manmohan Singh government constructed only 25 lakh houses in five years but under Modiji 1.30 crore houses were built and handed over to the people in four-and-half years, he said.

Ever since Modijis government came, the prices have been under control, he said.

Singh sought to know asked whether the ruling Telangana Rashtra Samithi government was doing anything to resolve the problems of turmeric and red jowar (sorghum) farmers  in the state.

Is the Telangana government doing something or not, and over 4,500 farmers have committed suicide in Telangana in the last five years, he said.

Singh assured farmers that all arrangements will be made to purchase turmeric crop and if need be a turmeric board will also be set up.

Similarly efforts will be made to provide remunerative prices to sorghum farmers, he said.

Over 170 farmers had filed their nominations from Nizamabad, from where TRS President and Chief Minister K Chandrasekhar Rao's daughter K Kavitha is seeking re-election.

This is in protest against the alleged failure of the TRS government to ensure minimum support price for turmeric and red jowarproduce.

He said the Centre has increased the Minimum Support Prices (MSPs) of 22 crops and introduced the Pradhan Mantri Kisan Samman Nidhi (PM-KISAN) wherein Rs 6,000 per year was being given to farmers and efforts were on to double farmers income by 2022.

Singh said he has been informed that the people of Telangana are not being benefited from the central government schemes.

He accused the TRS government of not extending central sponsored schemes in the state.

The Modi government provided free LPG connection to the poor households while over 14 crore beneficiaries were provided loans under Mudra schemes, Singh added.