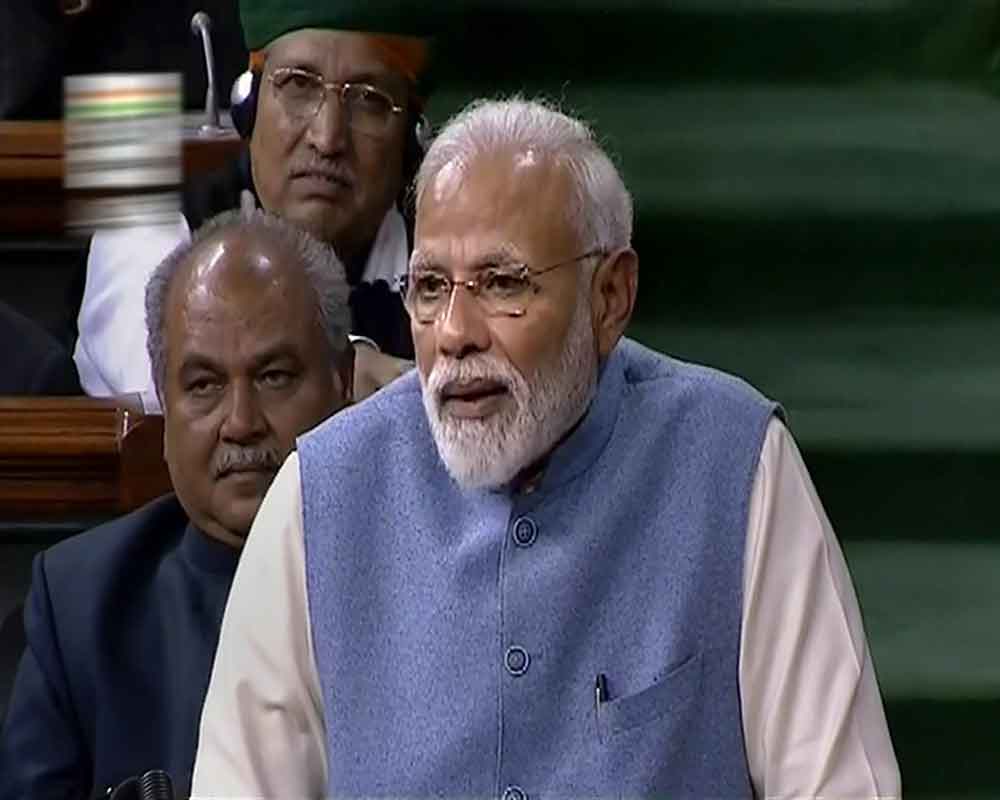 Prime Minister Narendra Modi took potshots at Congress president Rahul Gandhi over the Rafale issue and made a strong pitch for electing a majority government in national interest, as he addressed the 16th Lok Sabha for the final time on Wednesday.

Modi said the House did not witness any earthquake, an apparent reference to claims of Rahul Gandhi that his revelation on Rafale would create tremors.

Taking a swipe at Gandhi, who was not present in the House at that time, the prime minister referred to the Congress president's hug and "winking" episode, saying it was a new thing he witnessed as a first time member of Parliament.

"We heard that there would a earthquake. The five-year tenure is coming to an end but we did not witness any earthquake," he said, on a day the much-awaited CAG report on the controversy-hit Rafale deal was tabled in Parliament.

He also referred to an incident in the house in the monsoon session when Rahul Gandhi hugged Modi and later winked after returning to his seat during a no-confidence motion against the government in July last year.

Narrating another incident, the Prime Minister said when "I was responding to Motion of Thanks on the President's speech, I was witness to 'athaahas' (loud laughter)."

Entertainment industry, he said, can learn something as many actors cannot do such kind of acting.

Besides recalling several anecdotes, the Prime Minister in his 30-minute address also praised Speaker Sumitra Mahajan and leader of Congress Mallikarjun Kharge for playing their respective roles in Lok Sabha.

Modi also thanked SP leader Mulayam Singh Yadav for his "blessings" after Yadav said that he wished that Modi would return as prime minister.

India's self confidence has increased and the country's ranking on various parameters has seen improvement, the prime minister said.

He said India suffered globally for long due to fractured mandates. But now it is taken seriously in the global arena because of the majority government, he said.

The PM maintained that neither he nor External Affairs Minister Sushma Swaraj are responsible for India's enhanced image globally.

It is mainly because the country has got a majority government after a gap of three decades, he said, adding the credit goes to the people of the country.

The 16th Lok Sabha passed 203 bills out of 219 introduced, including one on curbing black money, the PM said.

"About 219 Bills were introduced and 203 Bills were passed. The 16th Lok Sabha members can boast of passing the bill to curb black money and corruption," he said, adding, 1,400 obsolete legislations were repealed by the House.

Legislations dealing with black money in abroad, Benami property, IBC to deal with insolvent companies, GST Bill were passed by the House, he said.

It is because of the efforts of Lok Sabha that India has become the sixth largest global and is fast moving towards becoming a USD 5 trillion economy, he said.

Modi also said that the 16th Lok Sabha witnessed largest number of women MPs who participated in the proceedings and deserves to be congratulated.

Eight of the 17 sessions of this Lok Sabha had over 100 per cent productivity, he said, adding, the overall productivity was recorded at over 85 per cent.

Talking about other initiatives of the 16th Lok Sabha, he referred to resolution of the long pending border issue with Bangladesh, salary of members of Parliament and 10 per cent reservation to economically weaker section.