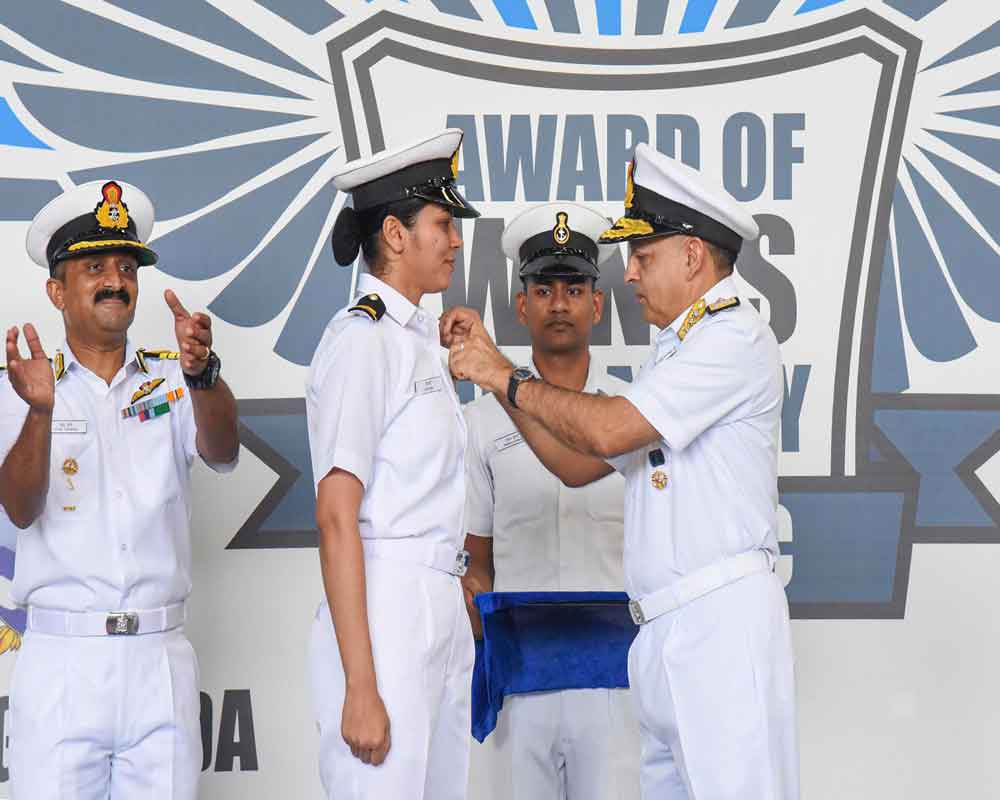 Sub-Lieutenant Shivangi of the Indian Navy on Monday became first naval woman pilot and joined operational duties in the presence of top naval officials at its base here.

It is a very proud feeling for me. It is a different feeling," Shivangi told reporters here.

Fulfilling her long-cherished dream, she received her 'qualification wings' from the chief of Southern Naval Command Vice Admiral AK Chawla.

I have been craving for this for a long time. It is a great feeling, she said.

She joined the Indian Navy as its first woman pilot on completion of operational training here.

Hailing from Muzzafarpur in Bihar, Shivangi would be flying the Naval Dornier surveillance aircraft.

As part of her training, Shivangi has flown Pilatus PC 7 Mk II, Basic Trainer at AFA and completed Dornier Conversion with the Indian navy in Kochi.

She would continue her training at INAS 550, the Dornier squadron at INS Garuda, to become a fully operational pilot on Maritime Reconnaissance (MR) aircraft.

Later, interacting with the media, she said she started dreaming of becoming a pilot ever since she saw a chopper carrying a minister landed in the neighbourhood of her grand parents' place in Bihar during her childhood.

Shivangi recalled that everyone in the area had gathered around to see the helicopter and she was one among them.

She got 'super-inspired" when she saw the helicopter and the man flying it.  She said her family is supportive and they never questioned her wish to join defence forces.

"In fact, they were proud," Shivangi said.

Shivangi, who joined the force just two days ahead of the Navy Day, also thanked the Navy staff and Qualified Flying Instructors (QFIs) for their support.

They have always encouraged me, she said.

The Indian navy congratulated her on her achievement.

Along with her, two trainee officers of the 7th Dornier Conversion Course (DOCC) also qualified as Dornier pilots and were awarded the coveted golden Wings at the simple and solemn ceremony, a defence spokesman said.

Vice Admiral AK Chawla was the chief guest for the ceremony who presented the Wings to the passing out officers, signifying their qualification as naval aviators.

The FOC-in-C South Rolling Trophy for standing first in overall order of merit was awarded to Lieutenant Shivam Pandey, he said.

The award of the Wings marks the culmination of one year of flying training at the Air Force Academy (AFA), Dundigal and Indian Naval Air Squadron (INAS) 550, INS Garuda in Kochi.

From here on, these pilots would join the Dornier Operational Flying Training course at INAS 550 from mid- January 2020, prior to joining an operational maritime reconnaissance squadron.