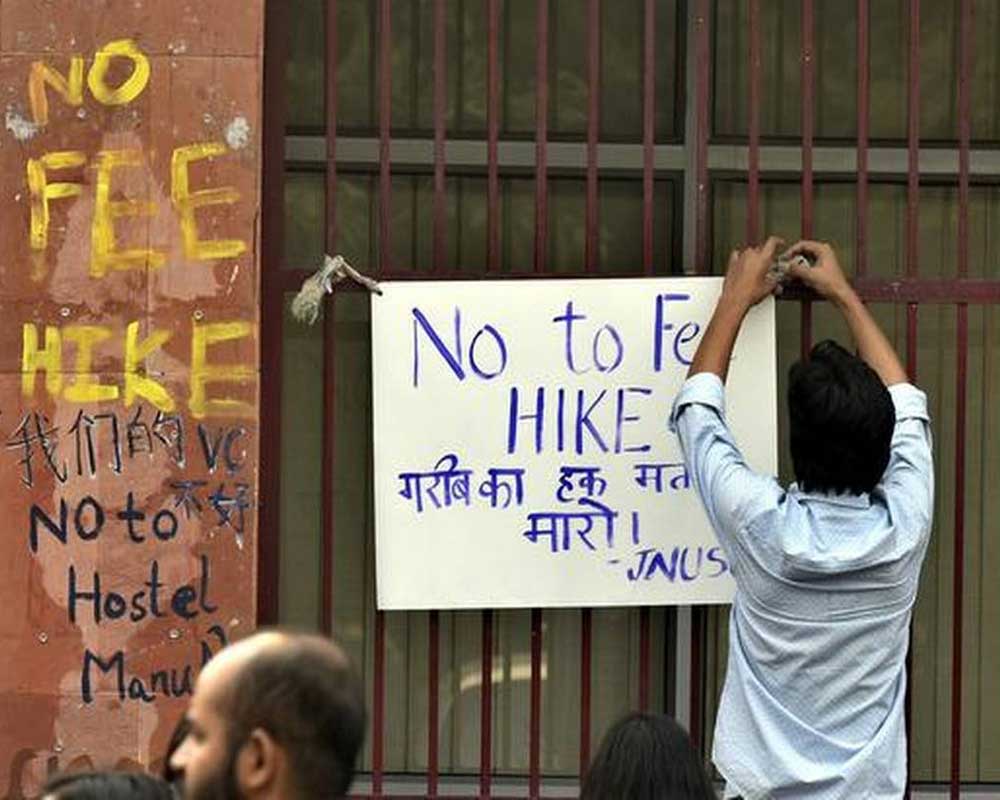 The decision to rollback the fee hike was taken at the university's Executive Council meeting, which had to be shifted outside the campus at the last moment fearing agitation by students.

The students have been protesting against the fee hike, proposed in the draft hostel manual, for 16 days.

A JNU Teachers' Association (JNUTA) representative said, "We will issue a statement when we have clear information. If the reports are to be believed, there is a no rollback but only cosmetic changes have been made."

The representative added they do not consider the Executive Council legitimate since eight members were not present owing to the administration not informing them about the change in the venue of the meeting.

The JNU students' union said it will continue its struggle till the time the hostel manual is not be discussed with them.

There are reports in the media that there has been a 'major rollback' in the fee hike for JNU, it said in a statement.

"The JNU community has received no communication whatsoever regarding this. The said EC meeting has happened without any communication or consultation. If it has passed the IHA Manual without consultation, which includes curfew timings, permission for adult students for going out for a day and regressive notions on dress code we reject it," they said.

On the issue of fee hike, there are unconfirmed reports that the so-called major rollback has happened only in room rent, they said.

"Our issue substantively is not just with the room rent but the Rs 1,700 service charge, water and electricity charge which was zero and has been steeply hiked," they said.

"The HRD secretary while announcing the so-called roll back has the arrogance to advise us to: 'go back to classes'. With the fee hike still in place, students will be going out of classes and out of JNU. We reject this sham propaganda and selective usage of facts," they said.

They said they want that the discussion of the whole manual should be between students through their representatives and the administration via a proper means of dialogue.

"The VC cannot run the university via Twitter," they added.

"The HRD Secretary tweet on "Major Roll Back' of fee hike is misleading! In order to save their face and create a false narrative, JNU admin in collusion with Modi Government is fooling students and people of this country #JNUFeeHikeRemains!" Balaji tweeted.

"JNU Executive Committee announces major rollback in the hostel fee and other stipulations. Also proposes a scheme for economic assistance to the EWS students. Time to get back to classes," HRD Secretary R. Subrahmanyam tweeted.

The students on Monday staged protest outside AICTE, the venue for the convocation. As the protests escalated, Union HRD Minister Ramesh Pokhriyal 'Nishank' was stuck inside for over six hours and forced to cancel two scheduled events.