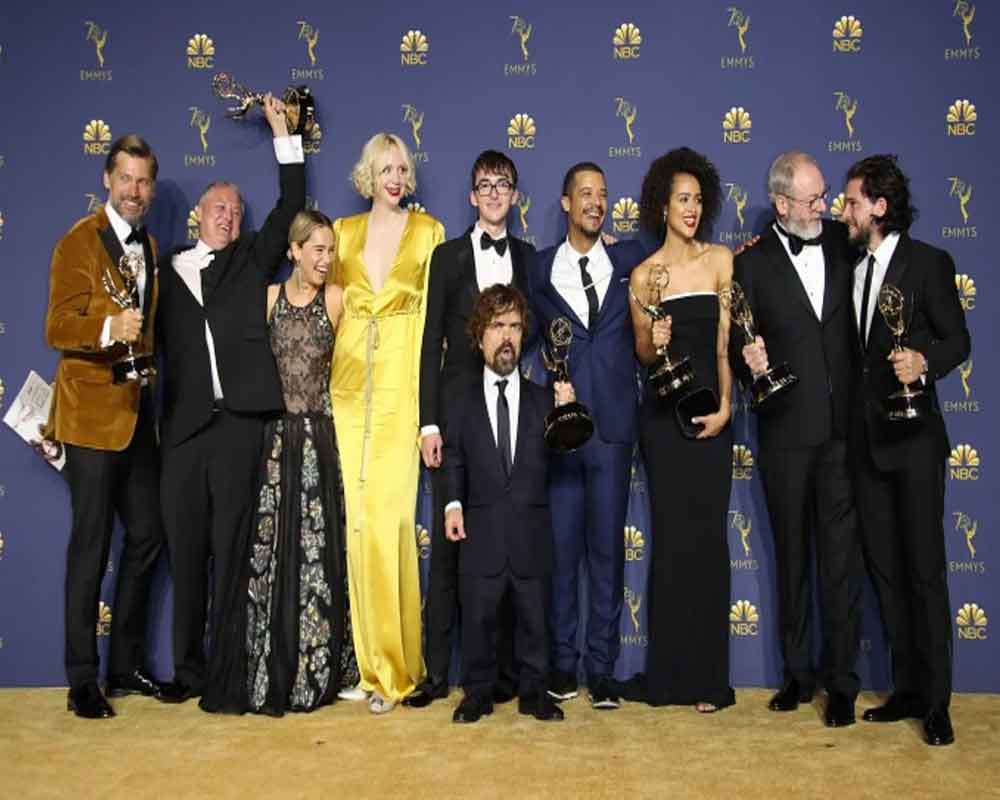 It is tough to sum up eight years and 73 episodes in a post or two about a show that has gone on to become a cultural phenomenon, but "Game of Thrones" stars tried to do just that after the finale, which has left many fans fuming and heartbroken at how their 'Watch' ended.

Actors Emilia Clarke, Sophie Turner, Gwendoline Christie, Jacob Anderson, John Bradley and Liam Cunningham took to social media to say an emotional goodbye to millions of fans and revealed how their characters in the HBO series will continue to guide them in their journey -- both personal and professional -- ahead.

Clarke, who has come to be known as Mother of Dragons Daenerys Targaryen, said it was hard for her to find right words to describe what the show has meant for her.

"'Game of Thrones has shaped me as a woman, as an actor and as a human being. I just wish my darling dad was here now to see how far we've flown.

"But to you, dear kind magical fans, I owe you so much thanks, for your steady gaze at what we've made and what I've done with a character that was already in the hearts of many before I slipped on the platinum wig of dreams. Without you there is no us. And now our watch has ended," she wrote in an Instagram post.

Turner, whose character arc as Sansa Stark has been one of the most satisfying, credited her screen ego for teaching her "resilience, bravery and what true strength really is".

"Thank you teaching me to be kind and patient and to lead with love. I grew up with you. I fell in love with you at 13 and now 10 years on... At 23 I leave you behind, but I will never leave behind what you've taught me.

"To the show and the incredible people who make it, thank you for giving me the best life and drama lessons I could have ever asked for. Without you I wouldn't be the person I am today," she wrote on Instagram.

Bradley, who played fan favourite Samwell Tarly, called the season finale of "GoT" as a "final step of a long and wonderful journey".

He recalled the time when he first met Kit Harington (Jon Snow) for the rehearsals.

"Listed here is the rehearsal where I first met Kit, and the first time I wore the costume that's seen me through 8 seasons. I'm glad I kept this. I met so many people that week who have come to mean so much to me. Back then we couldn't have known the journey we'd go on together. I wouldn't swap that experience, or those people, for the world," he posted on Instagram.

Anderson, who essayed the role of Grey Worm, described the show as "the craziest school trip ever".

"Huge shout out to the Targs team: Nats, Emilia, Conleth, Peter, Iain, Ian, Michiel, Reece and Ed for making every day fun. Here's to every single department behind the scenes who worked tirelessly everyday to make this thing, and they never get shout outs and they know that but they do it anyway. Here's to you, you ragtag bunch of talented clever rascals. I love ya'll. Thank you.

"Grey Worm. You went from a robot to a real boy. I'm proud of you. I'll miss you bud. Thank you to everybody that cared about him and rooted for him. He was really scared at first, but you made him feel loved. He appreciates it. I asked him," he wrote on Instagram.

Cunningham, who played Davos Seaworth, thanked his fans for all the support on Twitter and called the journey "utterly extraordinary".

Gwendoline Christie shared a picture with Harington in which she poses with a faux shock on her face and captioned: "BEING TOLD THE ENDING TO @gameofthrones". The actor played Ser Brienne of Tarth in the series.

"Definitely a win win situation... Homage to Gwendoline Christie for her brilliant performance as the warrior, the knight and the beautiful human being Brienne Of Tarth #GOTafterparty With my wife @grymolvaerhivju," Hivju captioned.

Not only the ones who survived both the Great and Last Wars, but the ones who did not too had something to say about the ending.

"I can't believe it's nearly over... @GameOfThrones. What a ride it's been," Nathalie Emmanuel, who starred as Missandei, tweeted ahead of the final episode.

Pedro Pascal, whose Oberyn Martell was killed off back in the fourth season, shot down the critics for slamming the finale in a tweet.

"Shut up, it was perfect. #GameofThrones," Pascal wrote.

The final season has been termed as one of the worst by fans, who even petitioned HBO to remake it with more "competent writers".

The final and eighth season was criticised by fans for sudden changes in character arcs and poor portrayal of its female characters, mostly Daenerys'.

The show has been a target of jokes and memes for forgetting a coffee cup in a crucial scene and a water bottle in the final episode.