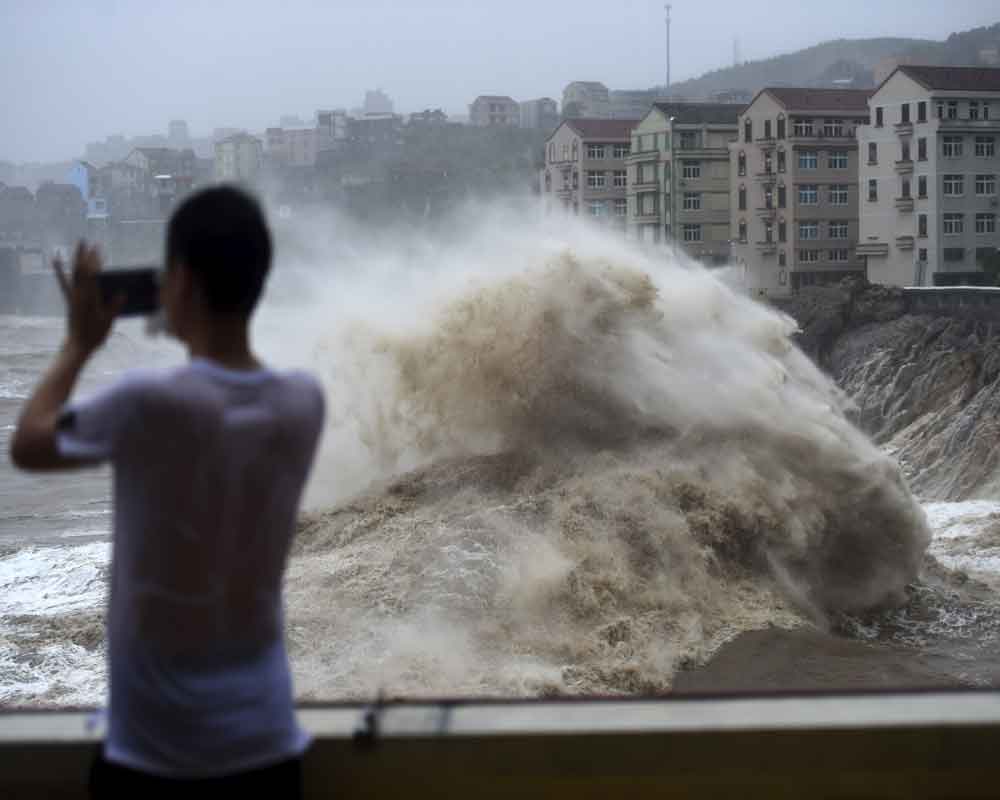 At least 18 people were killed and 14 others missing on Saturday after a typhoon-triggered barrier lake burst in eastern China's Zhejiang province, official media here said.

With a maximum wind force of 187 km/h, Lekima, the ninth typhoon to hit China this year, made landfall at about 1:45 am local time in Wenling city in Zhejiang, with Yongjia County the worst hit.

The monster storm triggered heavy rainstorms in Yongjia County and caused a landslide that blocked the rivers, raising the water level to a maximum of 10 metre within 10 minutes and trapping 120 villages, state-run Xinhua news agency reported.

Over 300 police personnel and public security officers were dispatched to the scene to help with the rescue work.

At least 18 people were killed and 14 others missing due to a typhoon-triggered barrier lake burst in Zhejiang province, the Xinhua report said.

However, there was no detail of the victims.

The typhoon will move north at a speed of about 15 km/h, with gradually weakening force, the National Meteorological Centre (NMC) was quoted as saying by the China Daily.

The storm will sweep through Zhejiang and Jiangsu provinces before making another landfall in the southern coastal areas of the Shandong Peninsula late Sunday, the NMC said.

The NMC issued a red alert as the super typhoon approached on Friday, before downgrading the level to orange as the winds eased to 144 km/h on Saturday morning.

The storm on Friday past the northern tip of Taiwan, where nine people were injured, thousands of homes lost power temporarily and more than 500 flights were cancelled.

It is for the first time that the Shanghai Disneyland, which was opened in June 2016, has been closed due to inclement weather conditions, state-run Xinhua news agency reported.

People who have booked tickets for the Shanghai Disneyland on Saturday can visit the park on any other day within the next six months, according to the resort.

Those who have purchased tickets for the 'Beauty and the Beast' musical on the day can contact the purchasing channels to reschedule or apply for a refund, it added.

More than one million people, including 253,000 people in Shanghai, were evacuated before the storm struck, the Xinhua said.

In Zhejiang province alone, 288 flights were cancelled, and ferry and rail services were suspended as a precautionary measure. Local authorities have deployed rescue teams of nearly 1,000 members, with 150 fire engines and 153 boats on call.

More than a quarter of a million people were relocated in Shanghai, where the high-speed maglev train that links the city to one of its airports was suspended. The typhoon blew down nearly 3,000 trees and snapped about 100 power lines, 80 of which have been restored so far.

Shanghai is hit by heavy rainstorm since Friday afternoon. The Lekima is expected to move at about 15 km/hr northward and westward with abatement of wind.