Britain's Brexit-beaten PM Theresa May announces resignation, to step down on June 7

Britain's Brexit-beaten PM Theresa May announces resignation, to step down on June 7 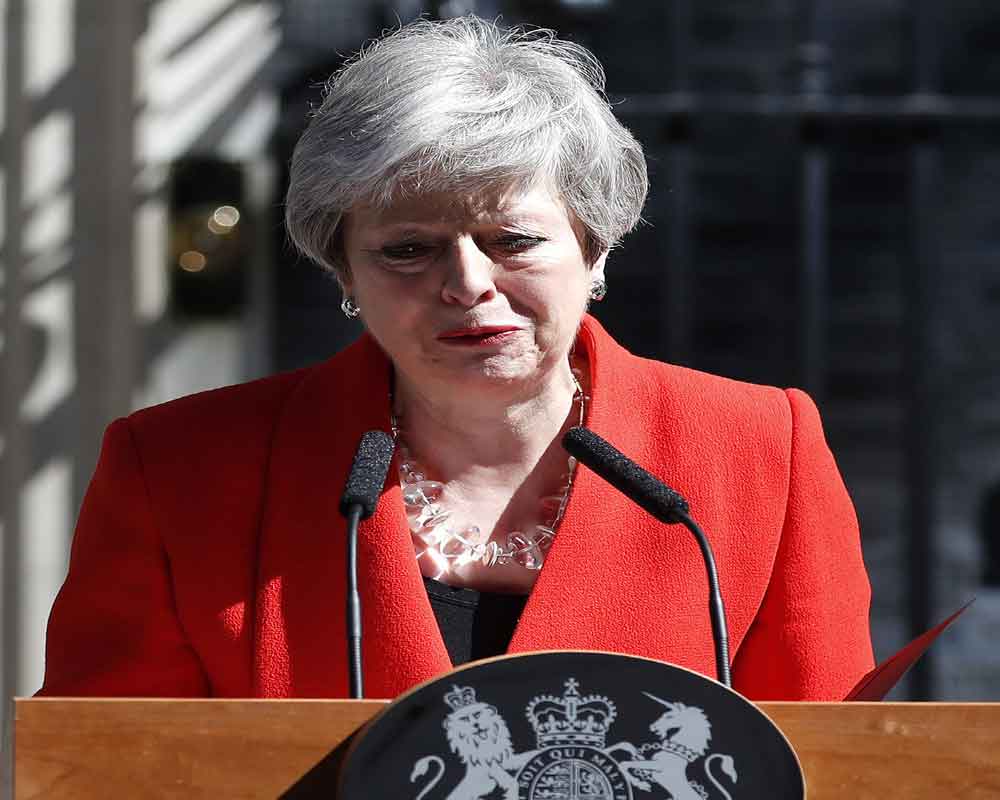 An emotional British Prime Minister Theresa May on Friday announced that she would resign as the Conservative leader on June 7 "in the best interests of the country" after she failed to win support from party lawmakers for her strategy for the UK's divorce from the European Union.

The embattled prime minister said she would step down as leader of the Conservative Party on June 7, with a leadership contest for a new Prime Minister to kick off the following week starting June 10. She would meanwhile stay on caretaker PM until a new incumbent has been elected by the Tories.

"I will shortly leave the job that it has been the honour of my life to hold," she said.

"The second female Prime Minister, but certainly not the last. I do so with no ill will, but with enormous and enduring gratitude to have had the opportunity to serve the country I love," the 62-year-old May said in an emotional speech outside 10 Downing Street.

The outgoing Prime Minister said she had kept Queen Elizabeth II informed of her exit timetable, meaning she would be presiding over US President Donald Trump's state visit to the UK from June 3.

Jeremy Corbyn, the leader of the opposition Labour Party, said May was right to call it a day.

"She's now accepted what the country's known for months: she can't govern, and nor can her divided and disintegrating party," he adds, calling for her replacement to order a snap election.

In her speech, May listed a series of what she said were her government's achievements, including tackling the deficit, reducing unemployment and boosting funding for mental health.

But she admitted: “It is and will always remain a matter of deep regret to me that I have not been able to deliver Brexit.”

The UK was to have left the 28-member economic bloc by March 29 but failed to meet that deadline and now faces a renewed Brexit deadline of October 31.

May was expected to resign after a meeting with the chair of the Conservative Party's influential 1922 Committee of backbench MPs on Friday.

"I have done everything I can to convince MPs to back that [Brexit] deal. Sadly, I have not been able to do so. I tried three times," she said.

"It will be for my successor to seek a way forward that honours the result of the referendum. To succeed, he or she will have to find consensus in Parliament where I have not," May said.

As her three-year premiership comes to a close, a new Tory leader would be in place on July 20, the Conservative Party said.

UK Foreign Secretary Jeremy Hunt during a meeting with May at Downing Street on Thursday said to have expressed his dissatisfaction with her renewed attempt at getting her controversial Brexit Withdrawal Agreement Bill through the House of Commons.

Hunt and number of other Cabinet ministers, including UK Home Secretary Sajid Javid, have held similar one-on-one meetings with the Prime Minister to reiterate the lack of support for the Bill despite her proposed changes.

It came as May announced her latest reshuffle after the resignation of Andrea Leadsom as Leader of the Commons earlier in the week, with Mel Stride becoming the new Commons leader.

May, who has been under constant pressure to step down since having survived a vote of no-confidence in December 2018, had even announced that she would set out her Downing Street exit plan once she had seen the first stage of Brexit through.

However, that exit has been precipitated as it became clear that the first stage of Brexit, passage of her Brexit Withdrawal Agreement, is unlikely to go through a fourth parliamentary vote.

To add to her woes, she is also unlikely to survive the fallout from the European elections held on Thursday – the results of which are expected to deliver a massive bruising for the Tories when the results unfold on Sunday.

Voters are expected to punish both the Tories and the Opposition Labour Party for being forced to vote in a European Union (EU) elections despite the June 2016 referendum in favour of Brexit.

The next stage of negotiations with the EU will be taken ahead by a new incumbent in Downing Street, with former foreign secretary Boris Johnson seen as a frontrunner from the pro-Brexit wing of the ruling party.

However, a host of other contenders are expected to throw their hat in the ring, including fellow Brexiteer Dominic Raab as well as Cabinet ministers Sajid Javid, Michael Gove, Amber Rudd and Matt Hancock. Others Tory MPs like Esther McVey and Rory Stewart have also indicated their intention to contest.

The UK Parliament has remained in deadlock since it rejected May's Brexit deal negotiated with the EU three times.

The biggest sticking point has been the Irish backstop clause, which Brexiteers believe will be used to keep Britain tied to EU rules even after Brexit.

May's attempts to find a formal compromise with the Opposition Labour benches to try and win another Commons vote also ended in failure and resulted in her adding a series of sops to her rejected deal, including the offer of a parliamentary vote on a second referendum in response to demands from a large chunk of Opposition MPs.

However, the sops had the effect of only further angering her already divided Cabinet and hastened the end of her time as British prime minister with just under three years in power since she took charge in July 2016 weeks after the Brexit referendum.