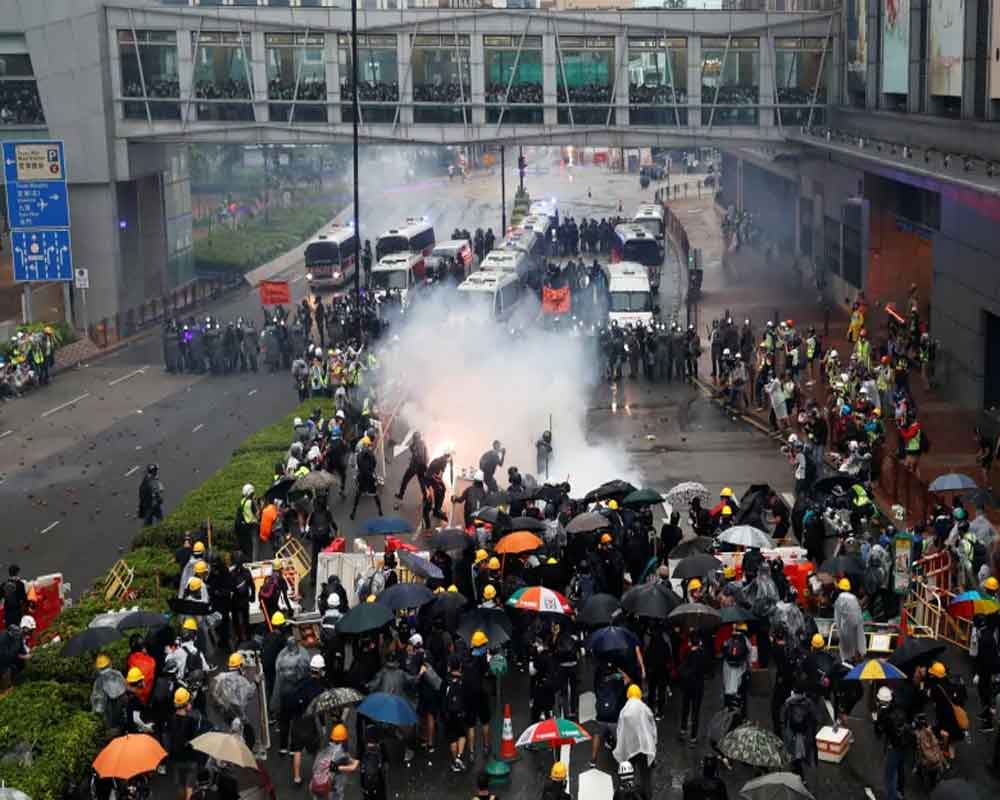 Hong Kong police on Monday said they were forced to fire water cannon and a warning shot to fend off "extremely violent" demonstrators, as months of pro-democracy protests veer deeper into violence.

Sunday's clashes in the suburb of Tsuen Wan were some of the worst in twelve weeks of political unrest tremoring through the city.

As night fell, a group of officers were cornered by protesters armed with bricks and other weapons, Hong Kong police said in a statement.

An officer fell to the ground under a barrage of blows and "facing threats to life", six policemen drew their sidearms and one "fired a warning shot into the sky", it said.

It is believed to be the first live round fired by an officer during the crisis.

Fifteen officers were injured during the clashes, the statement said, while dozens of protesters were arrested -- including a 12-year-old -- for unlawful assembly, possession of weapons and assaulting police.

"Police appeal to members of the public to make a clean break with violent protestors," the statement added, vowing "relentless action" to bring the perpetrators to justice.

The firing of a live round prodded an angry response from social media users who mocked a police spokesman who had praised the "valiant and restrained" actions of riot cops on Sunday.

"If the police can't control their emotion, how can they be valiant and restrained?" a Facebook user commented.

The weekend of violence -- unrest also flickered across the city on Saturday -- banished several days of peaceful actions, which included a human chain across the city.

The protest movement was sparked by an attempt by the city's Beijing-backed government to pass an extradition bill to China. But it has flared into a wider call for greater democracy and police accountability.

The mainly young protesters, whose angst also stems from sky-high costs of living and a lack of jobs, say the future of the city of around seven million hangs in the balance with Beijing chiselling away at its unique freedoms.

They have shown few signs of leaving the streets, while the city government has also refused to give ground.

The deadlock has sunk Hong Kong deep into crisis.

Throughout the protests, Beijing has used a combination of intimidation, propaganda and economic muscle to stifle the protests in a strategy dubbed "white terror" by the movement.

Major Hong Kong businesses have come under pressure over staff support for the protests, most notably airline Cathay Pacific and the city metro -- MTR -- which has been accused of ferrying demonstrators to rally sites.

Since the allegations in Chinese state media, the MTR has closed stations near planned protests.

The protests are hacking away at Hong Kong's image as a prosperous and stable financial hub.

Hong Kong stocks dived more than three percent at the opening of trade on Monday.