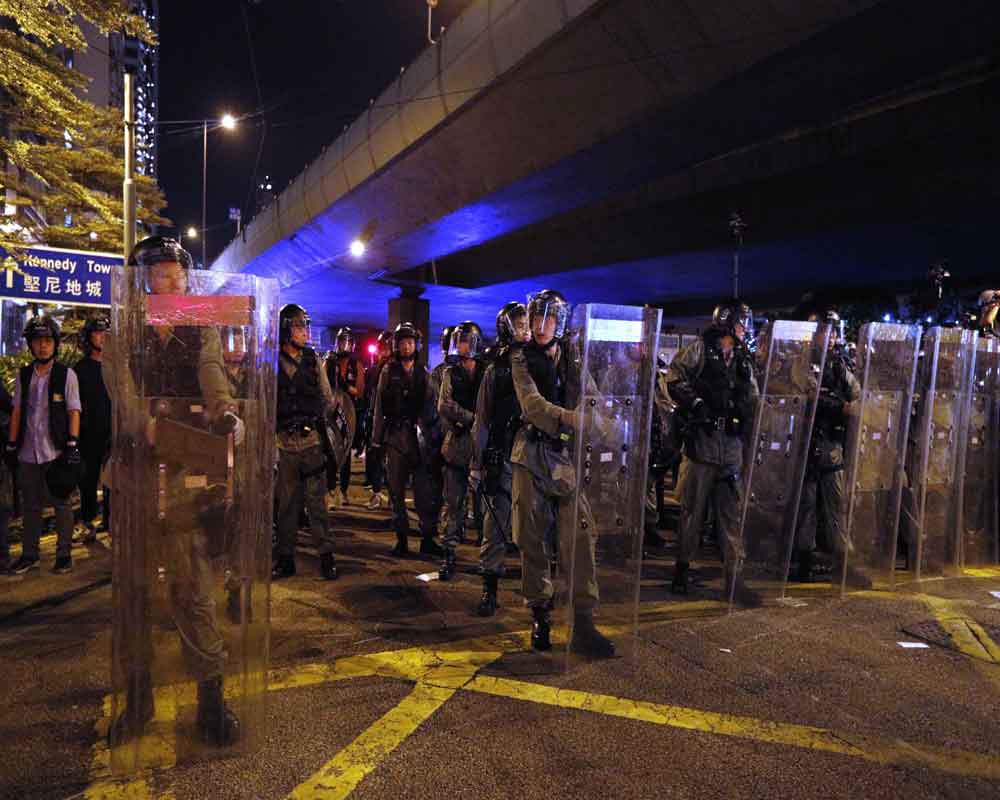 Masked protesters threw eggs at China's office in Hong Kong on Sunday night following another massive rally, focusing anger towards the embodiment of Beijing's rule with no end in sight to the turmoil engulfing the finance hub.

The city has been plunged into its worst crisis in recent history by weeks of marches and sporadic violent confrontations between police and pockets of hardcore protesters.

The initial protests were lit by a now-suspended bill that would have allowed extraditions to mainland China.

But they have since evolved into a wider movement calling for democratic reforms, universal suffrage and a halt to sliding freedoms in the semi-autonomous territory.

Police have fired tear gas and rubber bullets, while the parliament has been trashed by protesters as Beijing's authority faces its most serious challenge since Hong Kong was handed back to China in 1997.

On Sunday tens of thousands of anti-government protesters marched through the streets -- the seventh weekend in-a-row that residents have come out en-masse.

Police ordered protesters to follow a shorter route than normal, but the designated finish line was widely ignored as crowds headed towards the Liason Office -- the department that represents China's central government.

Thousands of masked demonstrators then seized the road outside the imposing skyscraper, erected barricades and began targeting the building with eggs, projectiles, laser lights and graffiti.

"We are here to declare that Beijing is the one violating our governing values and judicial procedures," a 19-year-old protester who gave his first name as Tony, told AFP.

A man wearing a black mask and bicycle helmet later read out a list of demands on a loudspeaker.

"There is no violent protesters or rioters, there is only tyranny, we will protect our homeland by any means," he said. "We urge the government to stop leading Hong Kong towards the brink of destruction."

Police were nowhere to be seen outside Beijing's office on Sunday evening, but there were widespread expectations among the protesters there that riot officers would soon respond.

Generally the marches have passed off peacefully, but some have been followed by violence between riot police and small groups of more hardcore protesters who feel years of peaceful demonstrations have achieved little.

Six weeks of huge protests have done little to persuade the city's unelected leaders -- or Beijing -- to change tack on the hub's future.

Under the 1997 handover deal with Britain, China promised to allow Hong Kong to keep key liberties such as its independent judiciary and freedom of speech.

But many say those provisions are already being curtailed, citing the disappearance into mainland custody of dissident booksellers, the disqualification of prominent politicians and the jailing of pro-democracy protest leaders.

Authorities have also resisted calls for the city's leader to be directly elected by the people.

Protesters have vowed to keep their movement going until their core demands are met, such as the resignation of city leader Carrie Lam, an independent inquiry into police tactics, amnesty and a permanent withdrawal of the bill.

They have also begun calling once more for universal suffrage.

There is little sign that either Lam or Beijing is willing to budge.

Beyond agreeing to suspend the extradition bill there have been few other concessions and fears are rising that Beijing's patience is running out.

A group of prominent activists from the leaderless movement read out a manifesto ahead of the march detailing protesters' frustrations -- the same words that were read out during the July 1 storming of the legislature.

"For too long our government has lied and deceived and refused to respond to the demands of the people despite numerous mass demonstrations of the past month," the activists said.

On Saturday, the establishment mustered its own supporters in their tens of thousands for a rally, a gathering that was covered in detail by Chinese state media and pro-Beijing newspapers in Hong Kong.

Few see a political solution to the crisis on the horizon.

Steve Vickers, a former head of the police's Criminal Investigation Bureau before the handover who now runs a risk consultancy, said the public order situation would likely "worsen" in the coming weeks.

"Polarisation within Hong Kong society and intense acrimony between protesters and police are deepening," he wrote in a note to clients."

Tensions have been further stoked after police on Saturday said they had discovered a homemade laboratory making high-powered explosives.

A 27-year-old man was arrested and pro-independence materials were also discovered.