Iraq offers to mediate in crisis between its allies Iran, US

Iraq offers to mediate in crisis between its allies Iran, US 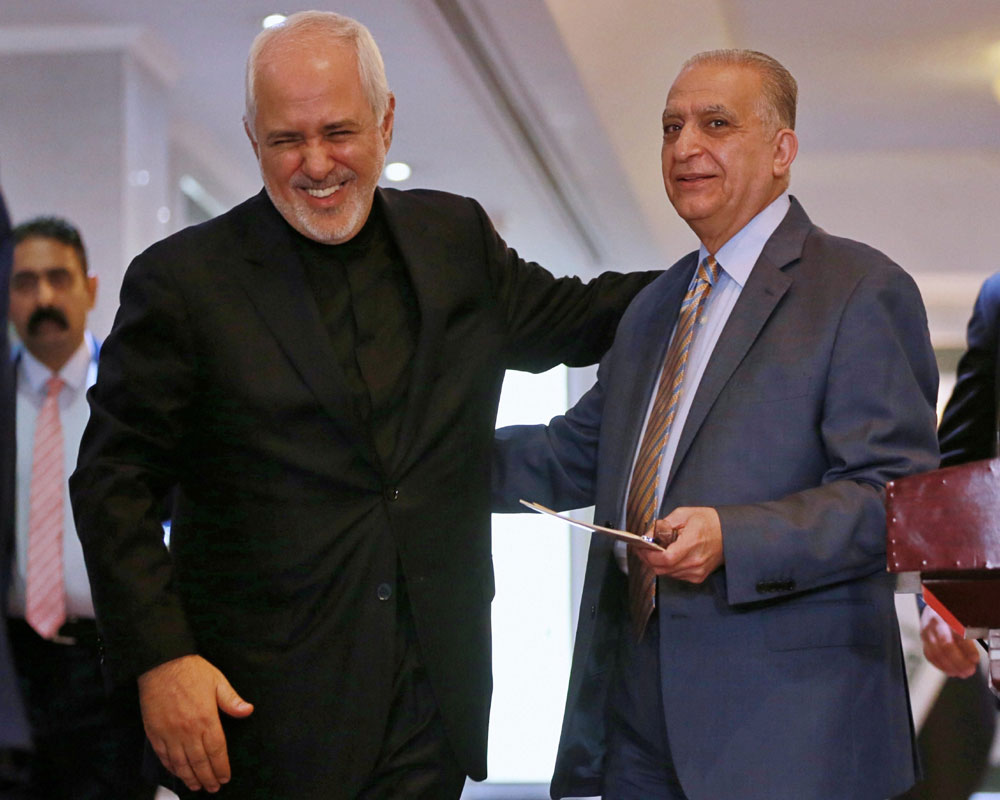 Iraq offered Sunday to mediate in the crisis between its two key allies, the United States and Iran, amid escalating Middle East tensions and as Tehran's nuclear deal with world powers steadily unravels.

"We are trying to help and to be mediators," said al-Hakim, adding that Baghdad "will work to reach a satisfactory solution" while stressing that Iraq stands against unilateral steps taken by Washington.

In recent weeks, tensions between Washington and Tehran soared over America deploying an aircraft carrier and B-52 bombers to the Persian Gulf over a still-unexplained threat it perceives from Tehran. The U.S. also plans to send 900 additional troops to the 600 already in the Mideast and extending their stay.

Trump has argued that the deal failed to sufficiently curb Iran's ability to develop nuclear weapons or halt its support for militias throughout the Middle East that the U.S. says destabilize the region, as well as address the issue of Tehran's missiles, which can reach both U.S. regional bases and Israel.

Zarif, who was been on a whirlwind diplomatic offensive to preserve the rest of the accord, insisted that Iran "did not violate the nuclear deal" and urged European nations to exert efforts to preserve the deal following the U.S. pullout.

Speaking about the rising tensions with the U.S., Zarif said Iran will be able to "face the war, whether it is economic or military through steadfastness and its forces." He also urged for a non-aggression agreement between Iran and Arab countries in the Gulf.

The Shiite-majority Iraq has been trying to maintain a fine line as allies Tehran and Washington descended into verbal vitriol. The country also lies on the fault line between Shiite Iran and the mostly Sunni Arab world, led by powerhouse Saudi Arabia, and has long been a battlefield in which the Saudi-Iran rivalry for regional supremacy played out.

Iranians make up the bulk of millions of Shiites from around the world who come to Iraq every year to visit its many Shiite shrines and holy places and their purchasing power has slumped after Trump re-imposed the sanctions.

"The sanctions against sisterly Iran are ineffective and we stand by its side," al-Hakim said.

Meanwhile, Iranian President Hassan Rouhani suggested the Islamic Republic could hold a referendum over its nuclear program. The official IRNA news agency said Rouhani, who was last week publicly chastised by the country's supreme leader, made the suggestion in a meeting with editors of major Iranian news outlets on Saturday evening.

Rouhani said he had previously suggested a referendum to Supreme Leader Ayatollah Ali Khamenei in 2004, when Rouhani was a senior nuclear negotiator for Iran.

At the time, Khamenei approved of the idea and though there was no referendum, such a vote "can be a solution at any time," Rouhani was quoted as saying.

A referendum could provide political cover for the Iranian government if it chooses to increase its enrichment of uranium, prohibited under the 2015 nuclear deal.

Earlier last week, Iran said it quadrupled its uranium-enrichment production capacity though Iranian officials made a point to stress that the uranium would be enriched only to the 3.67% limit set under the deal, making it usable for a power plant but far below what's needed for an atomic weapon.

Rouhani's remarks could also be seen as a defense of his stance following the rare public chastising by the supreme leader.

Khamenei last week named Rouhani and Zarif — relative moderates within Iran's Shiite theocracy who had struck the nuclear deal — as failing to implement his orders over the accord, saying it had "numerous ambiguities and structural weaknesses" that could damage Iran.

Khamenei, who has final say on all matters of state in Iran, did not immediately respond to Rouhani's proposal of a referendum. The Islamic Republic has seen only three referendums since it was established in 1979 — one on regime change from monarchy to Islamic republic and two on its constitution and its amendments.