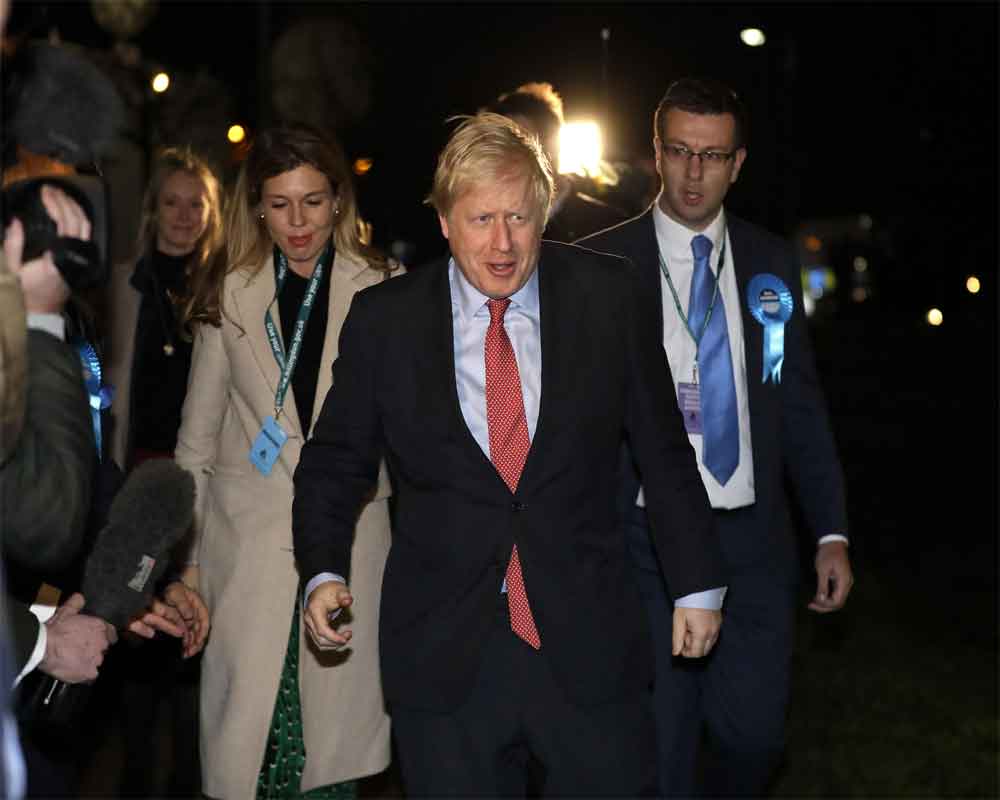 Boris Johnson is set to be re-elected as British prime minister with a comfortable majority in the country's general elections, according the latest projections on Friday, a victory that will end the uncertainty over Brexit and will help him to take the UK out of the European Union by the end of next month.

Johnson, who won his own seat in London's Uxbridge and South Ruislip, hailed the projected win for his Conservative Party as a "powerful new mandate" to move forward with his deal to leave the European Union (EU).

"It does look as though this One Nation Conservative government has been given a powerful new mandate to get Brexit done – and not just to get Brexit done but to unite this country and to take it forward,” said the 55-year-old Tory leader in his winner's speech after the results in his constituency were declared.

While stressing that the final tally is yet to be confirmed, he said the election would give him the “chance to respect the democratic will of the British people, to change this country for the better and to unleash the potential of the entire people of this country”.

The latest projections put the Johnson-led Conservatives at around 357, lower than the initial 368 but still well clear of the 326-seat half-way mark required for a majority in the House of Commons and also the certainty required for his so-called divorce arrangement with the EU.

The Opposition Labour is projected to get 201 seats, a disastrous performance for the party which resulted in leader Jeremy Corbyn announcing that he would be stepping down.

"It has been a very disappointing night for Labour... I will not lead the party in any future General Election campaign,” said Corbyn, as he won his own seat in London's Islington North constituency.

Labour is set for a crushing defeat which is almost entirely likely to be blamed on Corbyn's leadership and his failure to take a clear stance on Brexit as well as counter growing allegations of antisemitism within the party ranks.

A perceived anti-India stance since the party passed an emergency motion calling for international intervention in Kashmir is also likely to have swayed some of its traditional connect with the Indian diaspora voters.

The first sign of what the results held in store came with a definitive exit poll released at the close of voting at 2200 GMT on Thursday, which predicted the Johnson-led Conservative Party winning 368 seats, with the Labour Party way down at 191 in a predominantly Tory blue versus Labour red contest.

“This has been a hard-fought election in a very cold time of the year because we needed a functioning Conservative majority,” said Priti Patel, the senior-most Indian-origin minister in Johnson's last Cabinet, in response to the exit poll.

“We are committed to deliver on priorities and getting Brexit done is a priority. The deal is there, we want to move forward,” she said.

Labour, which looked set for one of its worst performances since 1935 as the so-called “red wall” of the party's heartlands towards the north of England looked set for significant knockdowns, conceded that voters seemed to have voted strongly on the basis of Brexit.

"Brexit has dominated this election. If the results are anywhere near the exit polls, this is an extremely disappointing result,” admitted Labour's shadow chancellor John McDonnell.

The first couple of results were some relief for the Labour Party as its candidates clinched the traditionally held Newcastle-Upon-Tyne Central and Houghton and Sunderland South seats, albeit with reduced majority.

But then came the first big upset of the night as the Blyth Valley constituency echoed the exit poll results and handed over a significant gain to the Conservatives, which grabbed the so-called Labour heartland seat which had been with the party since the 1950s.

Polling stations across all constituencies of the United Kingdom – England, Wales, Scotland and Northern Ireland – where a total of 3,322 candidates were standing began the count right after the polls closed, with the final tally expected to begin taking shape in the early hours of Friday.

The snap election had been called by Johnson in a bid to win a majority for his Conservative Party and break the Commons deadlock over Brexit.

It resulted in the UK's first December General Election in nearly a century and saw voters brave a cold and blustery winter's day to queue outside polling stations to cast their vote in what had been pegged as the most important election “in a generation”.

This also marked the UK's third General Election in less than five years and the second since the UK voted to leave the EU in the June 2016 referendum.

Johnson, who had taken over from Theresa May earlier this year with a pledge to meet the October 31 Brexit deadline, was constantly frustrated with a lack of majority in the Commons.

During the course of the campaign, he focused relentlessly on the "Get Brexit Done" message, promising to take the UK out of the EU by the new 31 January 2020 deadline if he was handed the mandate from the electorate.

In contrast, his main rival for No 10 Downing Street, Labour leader Corbyn, had promised voters another referendum with a choice between a renegotiated Brexit deal and remaining in the economic bloc. But the party primarily campaigned on a promise to end Tory budget cuts by increasing spending on public services and the state-funded National Health Service (NHS), a strategy which it would seem failed to make a dent in the polls.