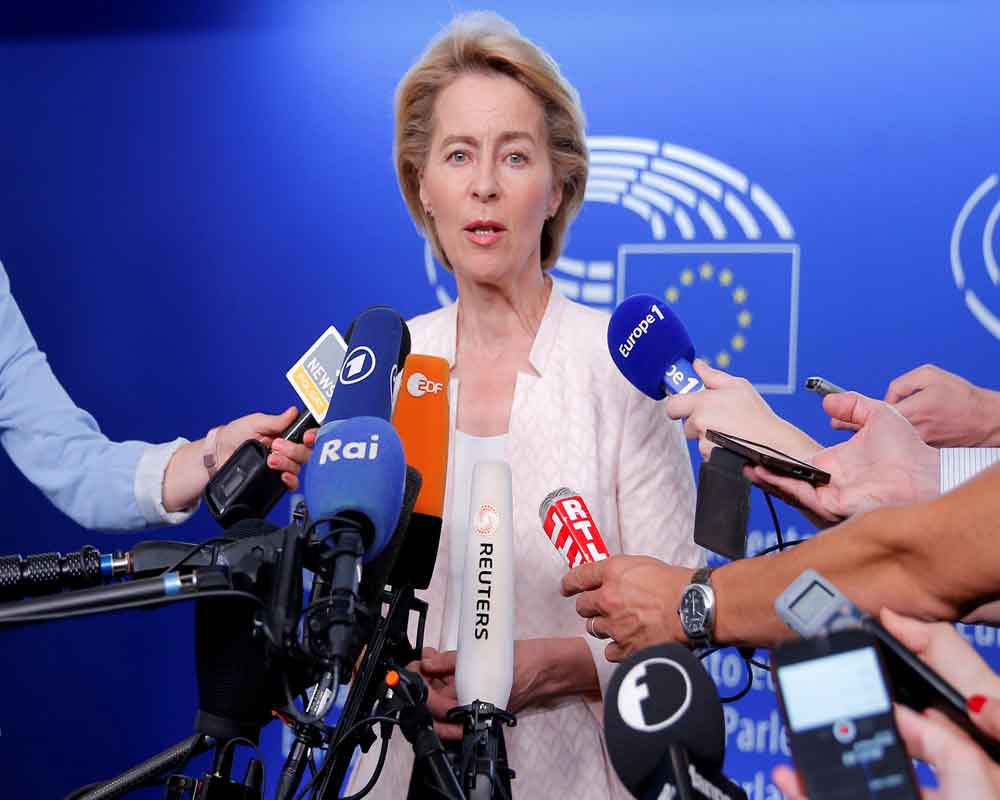 EU president nominee Ursula von der Leyen said Wednesday she hopes Britain will abandon Brexit but warned London it must take responsibility for "sorting out" its tortured departure from the bloc.

Von der Leyen said the divorce deal agreed with Prime Minister Theresa May but rejected by British lawmakers was a good one, signalling that under her leadership the European Commission will be no more willing to renegotiate than before.

She insisted there would be no change to the Irish "backstop" and warned the two men vying to replace May, Boris Johnson and Jeremy Hunt, that the "tone and attitude" of Brexit were vitally important to future relations between Britain and the EU.

Both have pledged to renegotiate the Brexit deal to get better terms or leave without one -- but the EU has been adamant it will not reopen the text.

Three years after the shock referendum vote to quit the bloc, Brexit remains a highly divisive issue in the UK and von der Leyen said that while she still hoped Britain would stay, London must act to end the impasse.

"Though I still hope you remain, it is in our interests to have you sort things out. We have an agreement -- which hasn't been signed on both sides -- and we have the backstop," she said in response to a question from a British MEP at a hearing with centrist deputies at the European Parliament.

"I think it's a good deal but it is your responsibility and your noble task to sort things out," she added, in her first public comments on Brexit since being nominated as commission president.

Von der Leyen, nominated by EU national leaders last week to take over from Jean-Claude Juncker on November 1, the day after Britain is due to leave, was wooing MEPs ahead of a confirmation vote in the European Parliament next week.

Flamboyant former London mayor Johnson, the overwhelming favourite to win the race to succeed May, has said he will leave on October 31 with no deal if the EU will not improve the terms, particularly on the contentious "backstop" clause relating to the Irish border.

The backstop keeps Britain in the bloc's customs union until a better solution is found to avoid checks on the border between EU member Ireland and British-ruled Northern Ireland, but it is despised by Brexit supporters who see it as a trap.

There have been British calls for the backstop to be changed or time-limited, but other EU states, particularly Ireland, insist it is essential -- and von der Leyen was adamant in her support of it.

"I think the backstop is of utmost importance. We absolutely know how crucial this non-existing of a border for you is, and therefore having the backstop in the Brexit deal is," she said in response to a question from an Irish MEP.

"The backstop is precious, important, and has to be defended." Johnson has also threatened to withhold the 39 billion pounds Britain has agreed to pay to settle its dues to the EU to cushion the blow of a chaotic "no deal" departure -- a move that would infuriate other EU states which see it as reneging on commitments.

After departing the bloc the UK will have to negotiate a trading partnership with the EU, and Von der Leyen warned of the dangers of poisoning the relationship from the very outset.

"In case we're going to have a Brexit, I am convinced it is crucial the tone and attitude with which Brexit happens," she said.

"Because Brexit is not the end of something -- Brexit is the beginning of future relations and its of absolute importance that we have good cooperation."