Police, protesters face off in renewed clashes in Hong Kong

Police, protesters face off in renewed clashes in Hong Kong 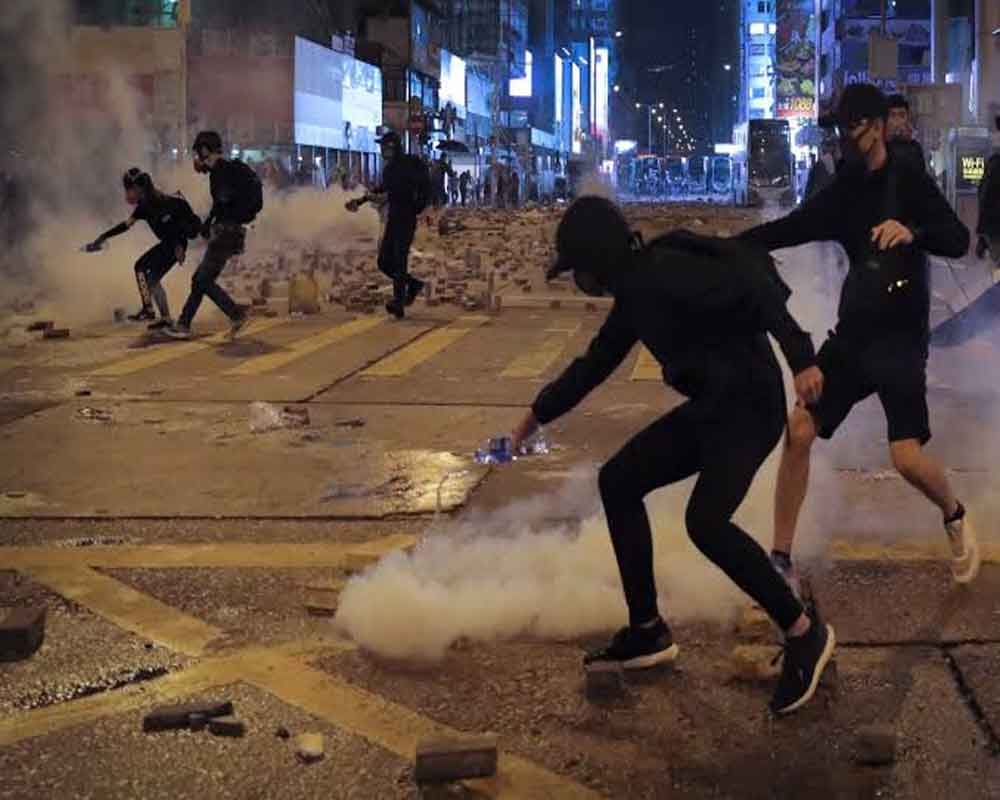 Protesters and police faced off in and around several university campuses as classes were cancelled. Subways were partially shut down, and passengers on one commuter train disembarked short of the station and were escorted along the tracks in video shown on Hong Kong television.

Recent weeks have been marked by escalating vandalism against shops and train stations and assaults by both protesters and pro-Beijing supporters on the other side.

Hong Kong leader Carrie Lam, speaking to news media after a weekly meeting with advisers, called the blocking of the morning commute "a very selfish act."

"People from different sectors in society are holding fast to their positions and refusing to concede to violence or other radical actions," she said.

"I hereby express my gratitude to those who are still going to work and school today." On Monday, a police officer drew his gun during a struggle with protesters, shooting one in the abdomen. In another neighborhood, a person was set on fire after an apparent argument.

The Hong Kong hospital authority said both were in critical condition. Video of another incident showed a policeman on a motorcycle riding through a group of protesters in an apparent attempt to disperse them.

Police say those events are being investigated but defend the officers' actions as necessary for their own safety.

Lam pledged Monday to stop the violent protests in comments suggesting harsher legal and police measures could be coming.

"I do not want to go into details, but I just want to make it very clear that we will spare no effort in finding ways and means that could end the violence in Hong Kong as soon as possible," she said.

Lam refused to accept the demands for political concessions.     "These rioters' actions have far exceeded their demands, and they are enemies of the people," she said.

One of their demands is for the government to stop labeling the demonstrators as rioters, which connotes that even peaceful protest is a criminal activity.

Their other unmet demands are for democratic changes in Hong Kong's government, criminal charges to be dropped against protesters and for police actions against the protesters to be independently investigated.

Following Lam's comments, confrontations between protesters and police continued into the night, with black-clad demonstrators torching at least one vehicle and blocking an intersection in the Mongkok district that has been the scene of many clashes.

A taxi driver was taken away by ambulance with head wounds, although it wasn't immediately clear how he had been injured.

In Washington, the US government said it is watching the situation with "grave concern."

"We condemn violence on all sides, extend our sympathies to victims of violence regardless of their political inclinations, and call for all parties — police and protestors — to exercise restraint," State Department spokeswoman Morgan Ortagus said in a statement.

She urged the government to address the underlying concerns behind the protests and the protesters to respond to efforts at dialogue.

In a widely distributed video of the shooting Monday morning, an officer shooed away a group of protesters near an intersection, then drew his gun on a protester who approached him. As the two struggle, another protester in black approaches. The officer fired at the second protester, who falls to the ground.

It was the second police shooting of a protester since the demonstrations began, although police have repeatedly drawn firearms to ward off attacks. Police said they arrested more than 260 people on Monday, raising to 3,560 the number of arrests since the movement erupted in June.