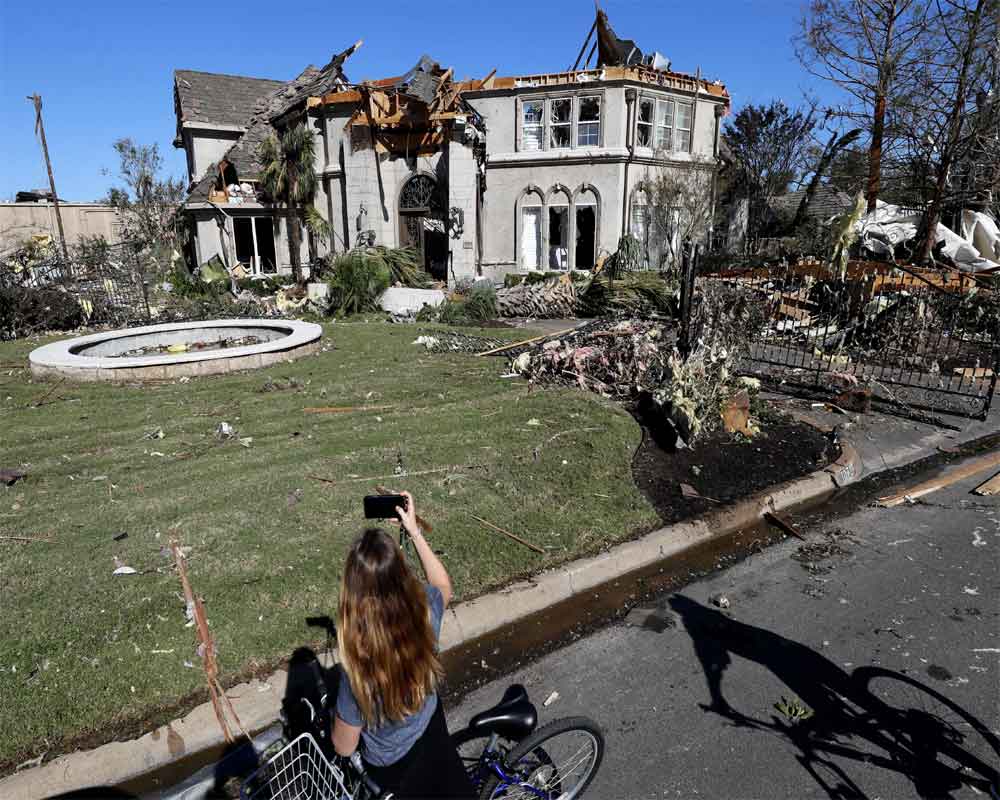 A tornado tossed trees into homes, tore off storefronts and downed power lines but killed no one in a densely populated area of Dallas, leaving Mayor Eric Johnson to declare the city "very fortunate" to be assessing only property damage.

A meteorologist said Monday that people took shelter thanks to early alerts, and that it was fortunate the tornado struck Sunday evening, when many people were home.

"Anytime you have a tornado in a major metropolitan area, the potential for large loss of life is always there," said Patrick Marsh, the warning coordination meteorologist at the National Oceanic and Atmospheric Administration's Storm Prediction Center in Norman, Oklahoma.

"We were very fortunate that the tornado did not hit the Dallas Cowboys' stadium or the State Fair, where you would have had a lot of people that were exposed." The tornado crossed over two major interstates.

"If that happened at rush hour, I think we'd be talking about a different story," he said.

The National Weather Service said the tornado that ripped through north Dallas was an EF3, which has a maximum wind speed of 140 mph (225 kph). The agency said another tornado in the suburb of Rowlett was EF1, with maximum wind speeds of 100 mph (160 kph).

The late-night storms spawned tornadoes in several states, killing at least four people in Arkansas and Oklahoma. The Storm Prediction Center said severe thunderstorms could continue through Monday night along the Gulf Coast from southeastern Louisiana to the Florida Panhandle, with damaging winds and a couple of tornadoes possible.

In one Dallas neighborhood, Dustin and Lauren Collins said they felt lucky as they cleared debris from the yard of their largely intact home.

"When other people's homes are in your front yard, you just realise — just the magnitude of the storm," said Lauren Collins, 36.

Dustin Collins, 37, said he gathered his family together after receiving the tornado alert. They climbed into the bathtub and pulled a mattress over top, huddling there with their 8-month-old son.

"We just sat in the bathtub and sang songs, trying to keep everyone calm," Lauren Collins said.

At a nearby shopping center, the fronts and roofs of stores were ripped away. Ruptured pipes were still spewing water Monday morning, drenching the piles of mangled drywall, insulation and steel framing inside the brick building.

Nearby, Georges Benamou said he was in his bedroom when a tree branch fell through the flat roof of his single-story home and into the living room.

Brent Huddleston, 43, said he sheltered with his 9- and 11-year-old children in a closet as the house shook around them. They later found parts of street and shopping center signs that had been blown into their yard. "It hit really fast," he said.

Dallas Fire-Rescue spokesman Jason Evans said no firefighters were hurt when the storm made the roof of Station 41 collapse.

The tornado that caused widespread damage in north Dallas passed closed to the home of former President George W. Bush and former first lady Laura Bush but caused no damage. Bush spokesman Freddy Ford said in a statement that "the Bushes are safe and praying for their neighbors around DFW who weren't as fortunate."

Tornadoes are not common in October, and cities are rarely hit because they don't have a big footprint in the tornado belt, according to tornado scientist Harold Brooks of the National Severe Storms Laboratory. It's like "randomly throwing darts," Brooks said.

A study by Brooks last year found that only one-third of the most violent tornadoes hit communities of more than 5,000 people.

The storm system disrupted flights in the Dallas area, northwestern Arkansas and at Memphis International Airport in Tennessee, where windows were broken.

One person died when a tree fell on a home in Rogers, Arkansas, about 150 miles (240 kilometers) northwest of Little Rock, according to the Benton County Department of Public Safety. In northeastern Arkansas, an EF1 tornado injured at least five people in Tyronza.