Trump, Pelosi trade insults as their feud heats up

Trump, Pelosi trade insults as their feud heats up 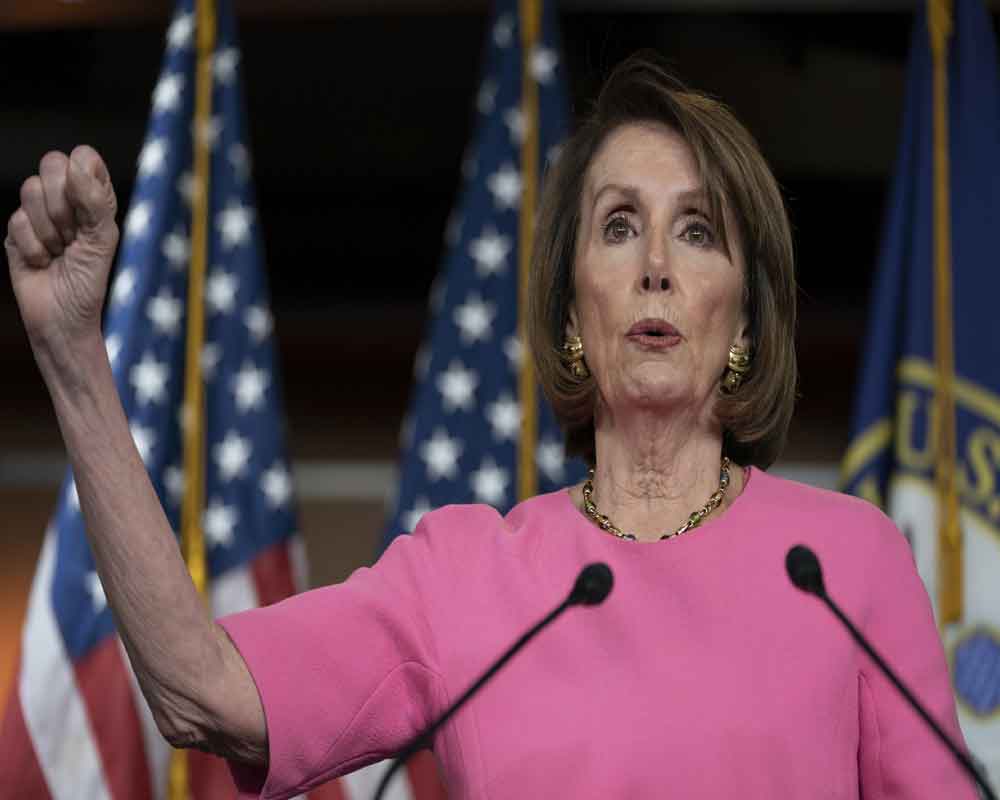 She's calling for an "intervention" to save the nation from him. He says she's "crazy." The enmity between President Donald Trump and House Speaker Nancy Pelosi deteriorated Thursday into rude-and-then-some questioning of his fitness for office and her sanity, with personal attacks flowing from both the nation's top elected officials after a dramatic blow-up at the White House.

However intended, the exchanges left uncertain ahead of the 2020 election whether Trump and the Democrats will be able to work together on serious, must-pass tasks, such as funding the government and raising the federal borrowing limit, let alone thornier issues such as immigration, national security and more.

Pelosi went first, with demure shrugs and practiced sass. Then, as a tornado warning blared across Washington, Trump followed with a derisive nickname — something he had declined to give her, up to now.

"She's a mess," Trump told reporters at an afternoon news conference in which he lined up White House staff to testify to his calmness the day before when he walked out after three minutes at a meeting with Pelosi and Senate Democratic leader Charles Schumer.

"Crazy Nancy. ... I watched Nancy and she was all crazy yesterday." As for himself, he declared, "I'm an extremely stable genius." Pelosi scolded back:

"When the 'extremely stable genius' starts acting more presidential, I'll be happy to work with him on infrastructure, trade and other issues," she tweeted.

There was more, before and after that exchange, for political enthusiasts with the time and interest to follow along.

For those who don't: The theater came a day after Trump stalked out of the Cabinet Room demanding an end to all congressional investigations before he would work with Congress on repairing U.S. Infrastructure or other matters. He apparently was wound up generally over the ongoing congressional Trump-Russia probes into whether he obstructed justice, and specifically by Pelosi's jab a few minutes earlier at the Capitol that he "is engaged in a cover-up."

"I don't do cover-ups," fumed Trump, who is fighting subpoenas for testimony by current and former White House officials.

Hanging over the increasingly personal exchanges is a drumbeat among about two dozen Democrats and one Republican to launch impeachment hearings against Trump based on special counsel Robert Mueller's report, which described Trump's efforts to block his federal investigation.

Pelosi has resisted that impeachment pressure, preferring a methodical process by which Congress investigates and lays out the facts on the question of obstruction of justice. She says the House is "not on a path to impeachment," but she's been clear this week that an impeachment inquiry is not off the table.

Short of that, she's been happy to give Trump a hard time all year, including questioning his manhood and forcing him to re-open the government without the border wall money he demanded. On Thursday, she said the White House is "crying out" for impeachment — the idea being that a vindication by the Republican-controlled Senate would help assure his re-election.

On Thursday, subtlety went by the wayside. Pelosi said Trump has established a pattern of unpredictability, and at one point she even joked about the 25th Amendment, the Constitution's provision laying out the procedure for replacing a president.

"I wish that his family or his administration or his staff would have an intervention for the good of the country," Pelosi said at her weekly news conference, adding that she prays for him and the nation.

"Maybe he wants to take a leave of absence," she said. Asked whether she's concerned about Trump's well-being, she replied, "I am." Trump denied he wanted the House to formally charge him.

"I don't think anybody wants to be impeached," he said.

Pelosi, the second in line to the presidency, said she thinks Trump's actions Wednesday were part of his skill at distraction. But she also suggested what he does isn't all strategic.

"Sometimes when we're talking to him he agrees," she said, only to change his mind. "He says he's in charge and he may be." During questions, Pelosi said she thought a reporter had asked about "statutory" intervention, the 25th Amendment.

"That's a good idea," she said with a smile. "I am going to take it up with my caucus. Not that they haven't been thinking about it." She has been insulting Trump since the meeting Wednesday that was supposed to be about bridges and other crumbling infrastructure.

"For some reason, maybe it was lack of confidence on his part ... He took a pass, and it just makes me wonder why he did that," she told reporters back on Capitol Hill. "In any event I pray for the president of the United States." Trump tweeted back: "Nancy, thank you so much for your prayers, I know you truly mean it!"