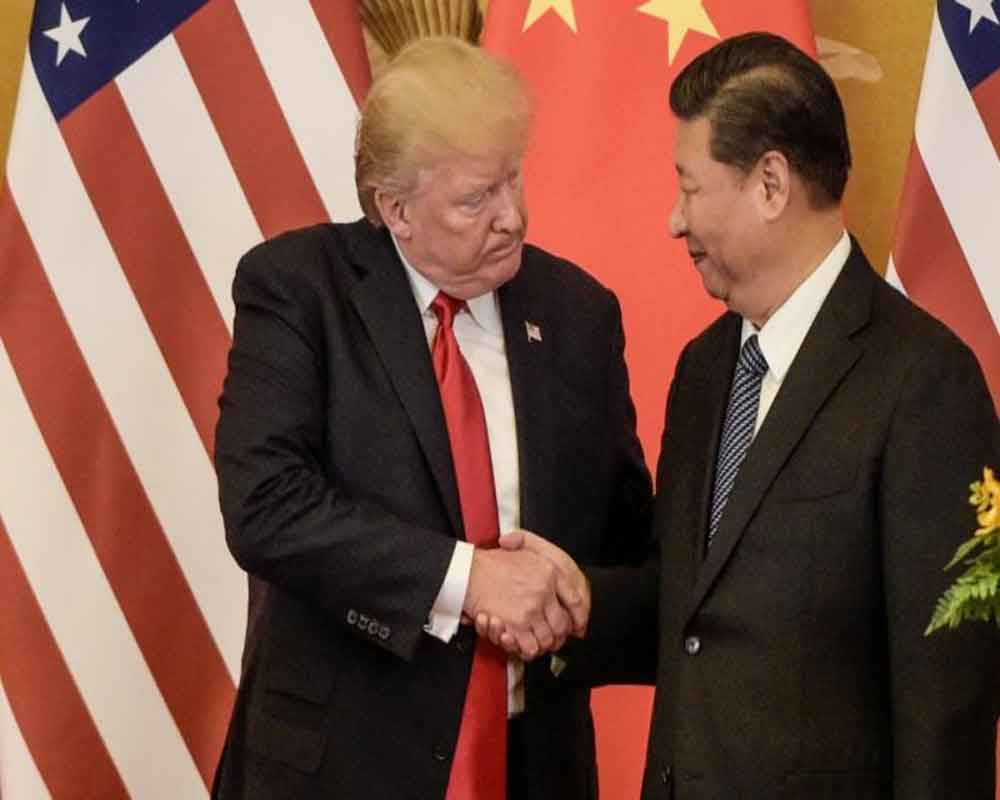 US President Donald Trump remained adamant on Monday on his policy to impose a hefty import duty on Chinese products, which has resulted in a quick retaliation from China and a massive downslide in the American stock market fearing a US-China trade war.

"There can be some retaliation, but it can't be very, very substantial, by comparison," Trump told reporters at the Oval Office of the White House, which was soon after China announced retaliatory tariffs on import of American products.

Last Friday, Trump increased the import duty on Chinese products worth USD 200 billion from 10 per cent to 25 per cent.

He has also started the process of a similar increase on the remaining Chinese imports of over USD 300 billion.

"Out of the billions of dollars that we're taking in, a small portion of that will be going to our farmers because China will be retaliating, probably, to a certain extent, against our farmers," Trump said.

He indicated that he was not going back unless China agreed to the negotiated trade agreement between them.

Later, at a White House Iftaar dinner, Trump hinted that things could be clear in four weeks' time. "We will let you know in about three or four weeks whether or not it was successful.... But I have a feeling it is going to be very successful," he told a gathering of eminent Muslims and diplomats from the Islamic world.

Trump told reporters that as a result of his policies, farmers and manufacturers would be very happy. "And our government is very happy because we are taking in tens of billions of dollars. I think it is working out very well," he asserted.

"It went up, as of Friday, very substantially. It's 25 per cent on USD 200 billion. So now, the total is 25 per cent on USD 250 billion. In addition to that, we have another USD 325 billion that we can do if we decide to do it," he said, adding that as a result, the US was taking in tens of billions of dollars. "This is a very positive step," Trump said.

But there was a panic reaction by the market as a result of the US-China trade tension. In New York, the Dow Jones Industrial Average fell 617.38 points, and the S&P 500 dropped 69.53 points. These are the biggest one-day loss since January 3. Similarly, the Nasdaq Composite declined 269.92 points, which is its worst showing since December.

Several US lawmakers came out in support of Trump.

"Americans are fed up with China's way of doing business and recognise that President Trump is the only one who has successfully brought the Chinese to the negotiating table. But when real progress was being made, China reneged on key issues, leaving the president with no choice but to take additional action," Senator Joni Ernest said.

"We need to reach a deal, but China must stop hindering the process and be reasonable trade partners. I am disappointed that China is forcing negotiations to where they are now. We want trade deals, not tariff wars," he added.

However, Democratic Senator Richard Blumenthal alleged that Trump was betting the farm on a deeply dangerous trade war -- other people's farms.

"There's a need to be tough on China, but the total lack of any strategy, only chaos and conflict are roiling the markets. Soon the economy will feel the brunt and costly burden," he warned.

"We need to hold China accountable for their unfair trade practices. But starting a trade war without a strategy or input from our closest allies only hurts Maryland's farmers, consumers and manufacturers," Senator Chris Van Hollen said.

In an interview to CNBC news, Secretary of State Mike Pompeo said Trump wanted to make the trade deal with China fair, reciprocal, even. "He wants our businesses to be able to compete in China in the same way that Chinese businesses can compete in the United States. Those are simple asks," he said.