US politics at new low as Trump, Pelosi indulge in war of words over Syria

US politics at new low as Trump, Pelosi indulge in war of words over Syria 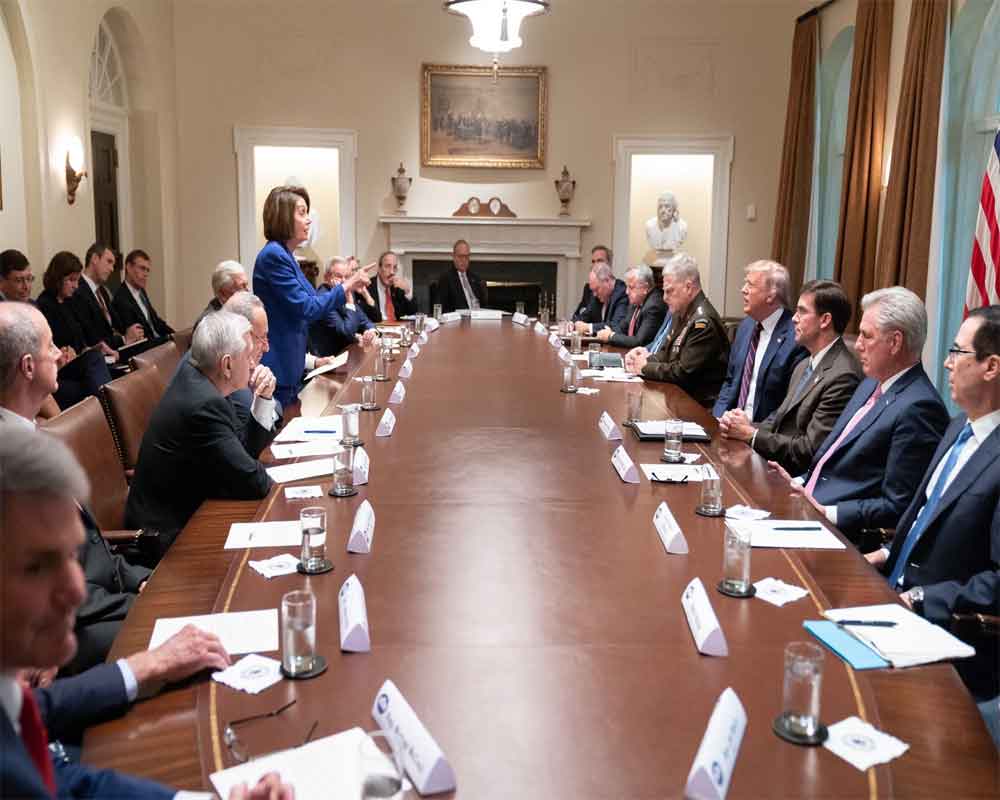 American domestic politics has experienced a new low with President Donald Trump and House Speaker Nancy Pelosi engaging in an unprecedented war of words on the issue of pull out of US forces from Syria, a move that paved the way for Turkey to launch cross-border military operations against US-ally Kurdish forces.

The war of words on Wednesday between the two leaders started after the White House had invited the leadership and top committee members of both Democrats and Republicans, and the Congress to brief them about their policy on Syria.

Emerging out of a meeting at the White House, the two leaders accused each other of a serious meltdown.

"Nancy Pelosi needs help fast! There is either something wrong with her ‘upstairs' or she just plain doesn't like our great Country," Trump said on Twitter.

"She had a total meltdown in the White House today. It was very sad to watch. Pray for her, she is a very sick person!” Trump said.

"The Do-Nothing Democrats, Pelosi and Schumer stormed out of the Cabinet Room,” Trump said in another Tweet.

Trump even tweeted a picture from the White House meeting room along with caption: “Nervous Nancy's unhinged meltdown”.

Pelosi, soon made it a cover page picture on her Twitter profile.

He also said President Trump told him the Turks and the Syrians will guard the ISIS prisoners.

"The president has no real plan for containing ISIS," he said.

The Democrats said they had walked out of the meeting because of the insults against Pelosi.

"What's really sad about it is I pray for the president all the time and I tell him that--I pray for his safety and that of his family. I think now we have to pray for his health,” Pelosi told reporters.

"This was a very serious meltdown on the part of the President. I was expressed my appreciation for what our troops have done in Syria and by all accounts from the generals they have just really done the job very well; that he's now pulling out," Pelosi said.

Responding to a question, Pelosi clarified that she is not talking about the mental health of the President.

The exchange of words comes amid the ongoing inquiry initiated by the opposition to impeach Trump following over claims that Trump pressured Ukraine's President Volodymyr Zelensky in a July 25 phone call to look into what the US leader said were corrupt business deals involving former vice president Joe Biden.

Democrats say that Trump tried to coerce Zelensky by holding back US military aid to Ukraine. Trump has denied any wrongdoing and dismissed the probe as a "witch hunt".

The Democrat-controlled US House of Representatives has passed a resolution rebuking Trump's decision to pull out troops from northern Syria, a move that paved the way for Turkey to launch cross-border military operations against Kurdish forces, who were a key ally of the US in the fight against the ISIS.

“He (Trump) was measured & decisive today,” she said in a tweet.

"Pelosi 'walking out was baffling but not surprising' with no intention of participating in a meeting on national security," she added.

Democratic “leadership” chose to storm out and whine to cameras, everyone else stayed to work on behalf of the country, Grisham said.