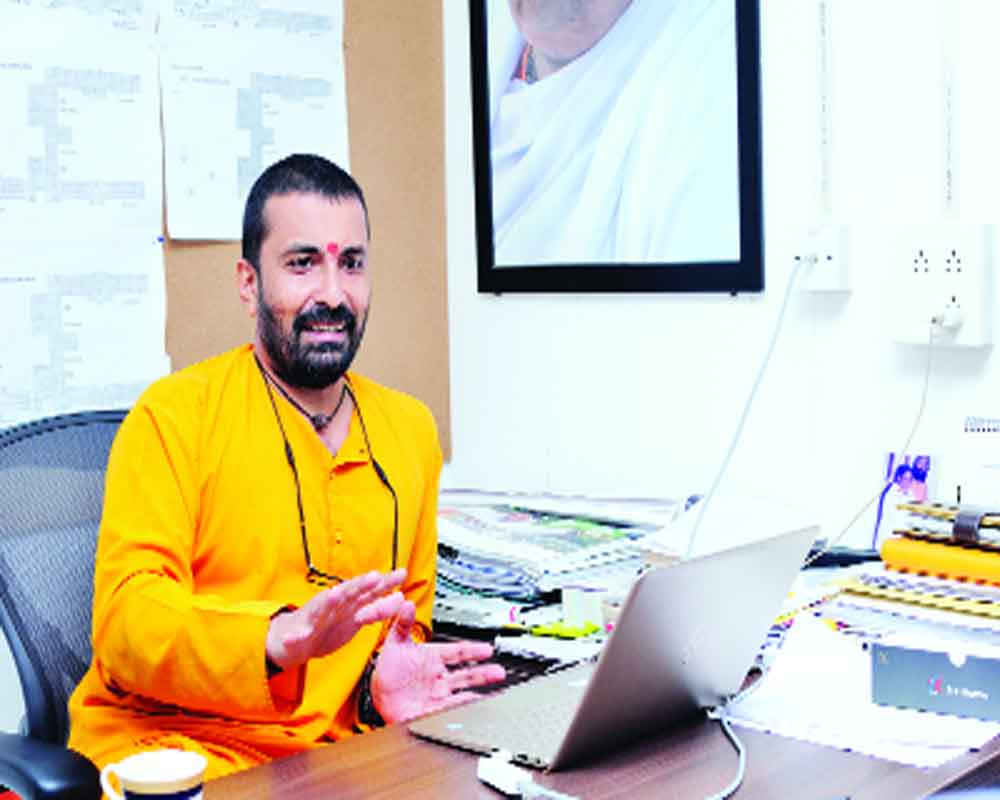 Brahmachari Nijamrita Chaitanya Swami ji, Matathipathi of Mata Amritanandamayi Math Delhi Ashram and head of the Amrita Institute of Medical Sciences, says that the new hospital will not just have cutting-edge technology, which can be upgraded in the future but will also treat both the paying and non-paying patients as equals

Amrita Institute of Medical Sciences (Amrita Hospital), based in Kochi, Kerala, is recognised as one of the premier hospitals in South Asia. Construction of the new branch of the hospital is in full-swing at Greater Faridabad. When it will be up and running, the place would have 2,400 beds, making it the largest in the country and perhaps, even in Asia.

Sitting in his office at the sprawling construction site, Brahmachari Nijamrita Chaitanya Swamiji, who is the head of the hospital and Matathipathi of Mata Amritanandamayi Math Delhi Ashram says, “The hospital has been under construction since two years and nine months. We have taken inspiration from a number of international hospitals including Mayo Clinic. Contributions have poured in from all over the world as have people who want to work at this facility.”

He does not like the use of the word property when referring to the hospital and points out that “it doesn’t belong to me rather it is being constructed to meet the  needs of people.”

“We will have 54 specialities here and a medical college as well as a research centre attached to it. The prices will be reasonable. The head of the research institute is from AIIMS. It is not only about existing cutting-edge technology but it needs to be futuristic too. There is research going on in the department on brain tumour. A mesh which is planted in the brain post operation which keeps on releasing a medicine originally costs Rs 8 lakh but we are working to make it under Rs 1 lakh or maybe as cheap as Rs 20,000. This will last for two years while the existing one lasts for six months,” says he.

The hospital will have the latest in the facilities. This includes Da Vinci Surgical Robotic System (ROSA), the latest generation in robotic neurosurgery assistance, the Mako Robotic-Arm Assisted Technology, which is transforming the way joint replacement surgeries are being performed; a CyberKnife M6 and Tomotherapy for the most precise radiotherapy available today, the GE Voluson E10 4D ultrasound system for spectacular 2D and 3D/4D images, a Philips 256 slice iCT scanner, a PET-3Tesla MRI scanner, which is extremely useful for early detection of cancer and the Digital Pathology Solution, a virtual microscope which digitises lab slides, which more accurately help clinicians in better, faster, cheaper diagnosis and prediction of diseases.

So what are the things that he would like to be incorporated in this branch? “Generally in the West, there is a thought that the doctor’s time is more valuable. We studied a lot. So all the departments are set up floor wise. It is not multiple departments on a particular floor rather one single department is big enough to cover a single floor. Or there might be couple of related departments on each of the floor. There are about 80 lifts in this building and about 150 lifts in the whole campus. Everything related to one particular department is done on the same floor from diagnostics to surgeries. Everybody is availing the same diagnostics. It’s not just a mere hospital but an academic one. This is the first campus which has been planned from end to end. We will expand things according to out needs. Right now, it has a capacity of 2,400 beds, including ICU. With further capacity to expand to 300 more beds,” says Swami ji.

As per the wishes of Mata Amritanandamayi, the founder and chairman of the Mata Amritanandamayi Math, the hospital will also have a strong focus on mother-and-child healthcare. “It will include a highly specialised multidisciplinary wing with maternal and foetal medicine and all pediatric subspecialties, including pediatric cardiology, heart surgery and transplantation, rheumatology, endocrinology, pulmonology, neurosciences, pediatric genetics, gastroenterology, pediatric orthopaedics and pediatric and foetal surgery. Three hundred beds are allotted to it,” says he.

The hospital will have both private rooms as well as wards. “The well-off will pay for the treatment of the poorer sections of the society. But even then, though we are yet to work out the costs, it will be cheaper than the other hospitals. Each ward will have four-six beds and not more. But there will be no compromising on the quality of facilities that are offered. Both the patients who pay and those who don’t get access to the same diagnostics and healthcare here.”

A medical college will be attached to the hospital and at the research facilities, the doctors as well as the students can make use of the facilities to learn more. “There will be simulators like the way pilots are trained. There will be lifelike mannequins on which they can train on.”

The math already has experience in running a hospital, and really well at that. The one in Kerala is rated as one of the top five hospitals in the country as it has cutting edge technologies and is extensively research-based. There are many procedures like hand transplant, which nobody has attempted in the country. “We even took out an embryo, restored its heartbeat and placed it back in the womb,” he says. Not surprisingly, anyone who plans to set up a hospital in Kerala treats this one as a model. Despite the facilities, the costs continue to be the lowest. “Even places like Medanta have come to train with us,” he says.

But when one asks what are  the learnings that they have carried forward, Swamiji smiles and says, “A whole list of what not to do. We are building on them. The older hospital was need-based and we kept on adding to it as as and when we felt a need to expand. In this, we have planned out the entire operation in detail and built it accordingly.”

Swamiji further tells us about the Mata Amritanandamayi Math Delhi ashram. He says that the it is not a service organisation. “People come here in search of truth and nothing else — who am I, what is the essence of my existence and why I am here. In the ashram, amma (Mata Amritanandamayi) meets everyone personally and they tell their troubles to her. She has seen people surviving the tough phases of life. People from across India and abroad flock here to have amma’s darshan. She listens to their worries, consoles, encourages and provides new direction to their lives. ‘Children, this ashram exists for the world, it belongs to you, to all the people who come here’, says amma.

Amma’s programmes are multi-faceted with several goals — to help the needy, to bring in modern technology and to inspire compassion and a sense of oneness with our fellow human beings, whatever their background may be. She teaches that selfless service with compassion is the foundation of all other spiritual practices. She upholds the ancient tradition of charity, where caring for others is the process through which the character of everyone involved is purified. This spiritually inspired approach lends beauty and charm to social welfare. Amma’s children manage her projects with the faith that they will be transformed through their service to love.

“People might think we do everything for money but that is not true. The amount of effort that goes into this is 100 times. In every project we ensure that the money is utilised optimally as it is people’s money,” says Swami ji.

In providing vocational education, start-up capital, marketing assistance and access to micro-credit loans and microsavings accounts from government-regulated banks, the ashram is working to equip unemployed and economically vulnerable women with the skills and means to set up small-scale, cottage-industry businesses.

“There are many activities that goes on here. In order to financially empower rural villagers, the ashram is providing training in tailoring, organic-crop production, sandal-making and other vocations as well as helping villagers to form and maintain cooperative businesses. We have a concept called live in laps, in which the students of the medical college have to go to some villages and spend time there to understand the problems of rural people. The students from abroad also live in the villages. We have adopted about 60-70 villages and we have plans to reach 100. We have taken up all the initiatives from training in the villages to vocational teaching, water, electricity and installation of filters due to solar panel technology at many places. The process of making toilets is in process all over the country. We train the villagers in certain activities. For instance, we help them at plumbing, not just through direct teaching but we use robotics and mechanical studies. They see the process of plumbing virtually on computers. They are taught how to understand and analyse the pressure and how to lessen or increase it accordingly. The visuals on the screen helps them to understand the process better. In this, a special focus has been placed on women where they are making not just their own toilets but that of the others too. This also generates employment.”

“Basically, I’d say, we are not an institution with an agenda. We try to find solutions to everything. When we see Mother Nature as the embodiment of God, we will automatically serve and protect her. This is what amma believes. We also do take care of the environment as well,” adds he.