An ode to special powers

An ode to special powers 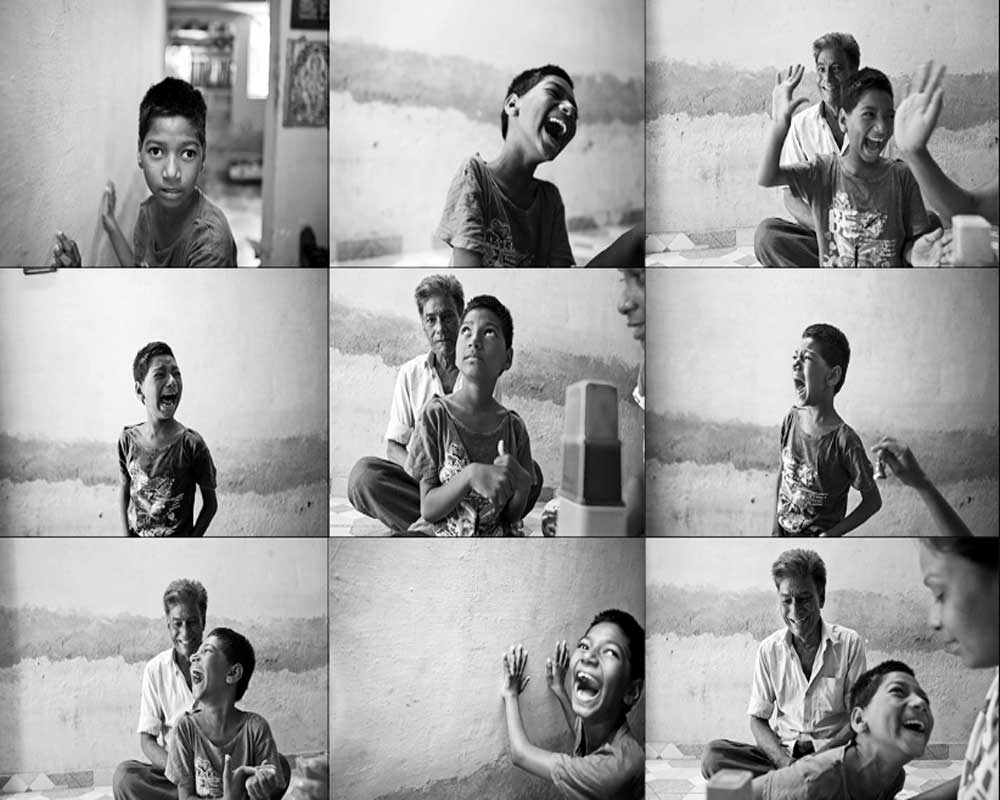 Photographer Bindi Sheth, through her series of photographs of differently-abled children, Like Us, brings attention to the hope, joy, tears and perspectives of those who might struggle with everyday chores, yet represent extraordinary capacities for growth and citizenship. By Team Viva

With empty pockets but a smiling face, rejection yet a heart full of hope, helplessness yet a soothing voice, children with special needs could act as a helping hand and a guiding light to many. Photographer Bindi Sheth’s exhibition, Like Us, featuring children with special needs at the Prabhat Education Foundation in Ahmedabad, documents their undying spirit through her DSLR camera.

She tells us how she initially used to randomly click their photos through her phone and the children used to get so excited. “I used to teach them and shoot some pictures of them randomly. I then realised I could actually use a professional camera to take their shots and we could put it for our website. And then, we finally decided to put up an exhibition for the photos, which would also take their stories forward in the public domain. What better than a photography exhibition then?,” says Bindi, who sees the children as one of her many inspirations and someone who are no less than other regular children.

The photographs show children of the foundation engaging in different day-to-day activities. From a young girl, who is seen being cradled in her teacher’s arms, to a boy, who is trying to make sense of the playing blocks and put them into a structure, from little hands at drawing to a toddler with twisted feet learning to come to terms with walking the floor — the photographs display all kinds of emotions these children go through in their everyday lives. She narrates how shooting them has been an overwhelming experience for her. She says, “It was emotionally stressful. The kids are so loving and ever-curious about things. I wonder how people can help others so effortlessly and lovingly at a place where even the navigation of their bodies and souls is a difficult task. Emotions need to be reined there. And I am overwhelmed to see their spirit sometimes. I have ended up with tears many a times. After shoots, I used to be restless, agitated and irritable. I was not the same. As photographers, we are told not to get involved and just observe, shoot and leave. I did all three, a little more and cried. I walked into their homes, heard their stories and felt their unsaid pain.”

Most of the photographs, from a series of 35-40 of the exhibited, have been shot in black and white. Why though? “Not all of them are black and white. Keeping them coloured would have been looked too realistic. I wanted to concentrate on their emotions and their backgrounds. And keep them coloured wouldn’t have brought to the photos the right connect,” explains the Ahmedabad-based photographer.

Don’t these children feel shy or conscious while facing the camera? How challenging was it? Bindi explains that “there were all kinds of responses” from them. On one hand, where some of them ignored her and continued doing what they were doing, on the other, some of them smiled and a few others got excited and wanted to look at what had been clicked.

She explains the exhibition title, Like Us, “I have a habit of putting myself in other people’s shoes and wonder as to what do these children think and feel when they look at the world. I then realised that even they want to be as much a part of the regular routines that other children go through. They also want to be included. And even though they struggle with daily chores, which at times could be a task for them, are capable of doing everything. They are disabled yet smart and talented. Many of them could draw, sing and make jokes. They have a lot of problems yet they are so much ‘like us’, after all they are humans too. The photographs convey that their hope, joy and tears are just like us.”

The idea of the exhibition, she says, seeks to reflect the perspective of these children who’re so often stigmatised and discriminated against yet represent extraordinary capacities for growth and normal citizenship. One of the young girls in the school, suffering from microcephaly, wherein, the child’s head is much smaller than the body, leaving her intellectually disabled, died six months ago. Her body weight had remained static for seven years. It’s evident with such cases that the attention to this lot needs to be increased. And given that 21 million people suffer from one or the other disability in the country, the issue demands greater attention.

Starting with just one child, the foundation has now touched some 3,000 lives in a few disadvantaged areas like Danilimda, Vatva and Lamba in east Ahmedabad.

After being exhibited in Ahmedabad, Gandhinagar and at India International Centre (IIC) in New Delhi, Bindi is now working on a book to take the photographs to a wider audience. The photographs will also be available for sale on the foundation’s website.