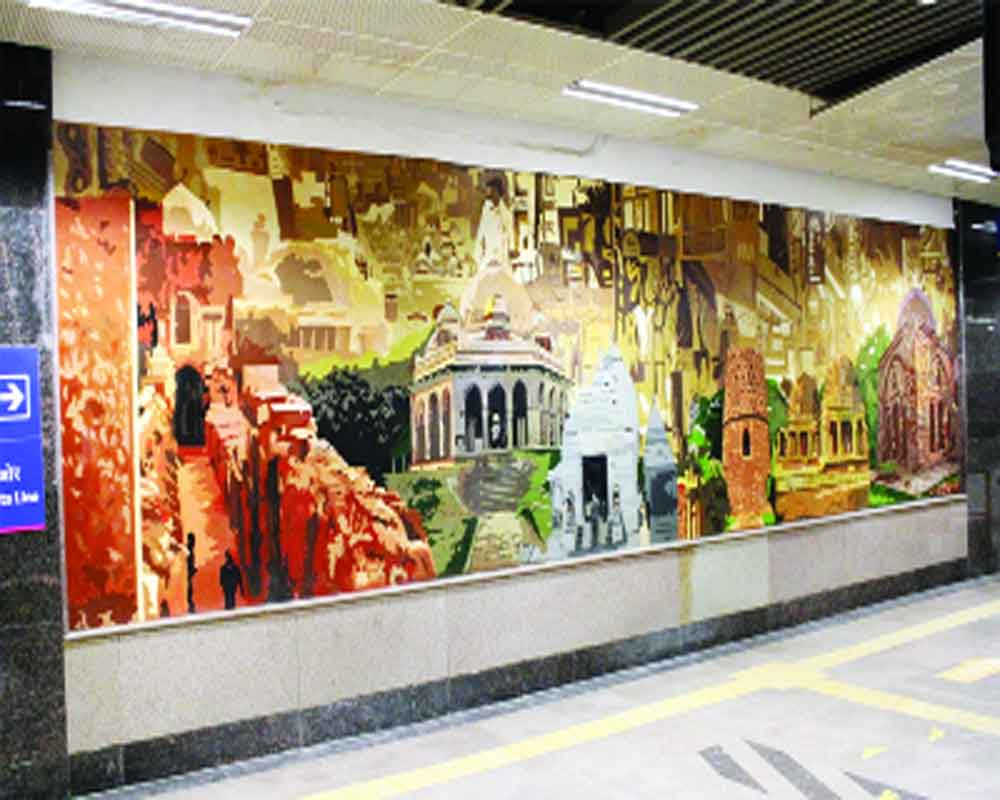 Most Indians may still need a push to visit art galleries and museums, but when the national capital’s favourite commuting mode Metro Rail doubles up as a contemporary art gallery itself, it is not uncommon to see Delhiwallahs stop, look and even click an occasional selfie.

Whether it is abstract or realistic art, colourful ceramic tiles or informative panels, the wide station network of Delhi Metro Rail Corporation (DMRC) seems to have it all covered, as the modern transport service that began in 2002 and continues to expand, zooms in on art and culture.

The Pink Line and Indian cultural symbols seem to coalesce in more stations, especially Gokulpuri and Shiv Vihar, which exhibit different dance cultures of our country — Dhunuchi, Bhangram, Dandiya Raas, Bharatanatyam, for the former and Chhau, Cham and Kathaputli for the latter.

On the Hauz Khas station, an intersection of the Yellow and Magenta Lines, historical monuments galore. Lodhi Tombs, the Gurudwara Bangla Sahib, Jama Masjid and Humayun’s Tomb reflect the diverse cultural fabric of India. Many other metro stations are ready takers of art on history and heritage. Mandi House comes first to mind.

The works here chronicles the journey of the area from brick kilns to a culture hub. Its panels display digital prints of original maps and vintage photographs, like a rare aerial view of the Modern School at Barakhamba, an old photograph of India’s first Prime Minister Jawaharlal Nehru opening the Sapru House, and actor Naseeruddin Shah in a 1973 theatre production by theatre doyen Ebrahim Alkazi.

Rare images of Dadi Pudumjee, under whom the Sri Ram Centre established the first modern puppet theatre are also on display.

At the INA metro station, the DMRC, in collaboration with the Ministry of Textiles, has also installed 58 panels of handicrafts and handlooms created by craftsmen from across India — from Mithila paintings from Bihar to terracotta tiles from Rajasthan.

Two stations on the long and busy Blue Line, Karol Bagh and Karkardooma, use ceramic artworks and painted wall works to show signs of a modern, progressive society.

While the Karol Bagh murals feature development aspects like education and technology, the Karkardooma station, which opens near the Karkardooma District Court, has references to the judiciary — a set of scales and hands, handcuffs, police and a colossal Ashok Chakra.

Nature enthusiasts who commute by metro are not disappointed as well, as Mandawali-West Vinod Nagar has its focus on flora and fauna, and the walls of this station feature vibrant paintings of leaves, flowers, toucans and Koi fish.

Regular metro commuters would also know of the Metro Museum at the Patel Chowk Metro Station, which traces the genesis of the Delhi Metro which took 32 years to reach the operational stage from the drawing boards.

As per DMRC, Delhi Metro stations that cover almost every corner of the NCR today are perfect spaces for the promotion of India’s art and culture

“Such projects have also contributed towards the beautification of the city in general. We have also tried to portray the heritage and history of the areas around the stations. For example, the stations passing through old Delhi has artworks related to that area,” a spokesperson from DMRC said.

For now, Delhi Metro’s present span of over 370 km and 271 stations (including the Noida-Greater Noida Aqua Line) has a lot to offer to its average daily ridership of about 30 lakh people.