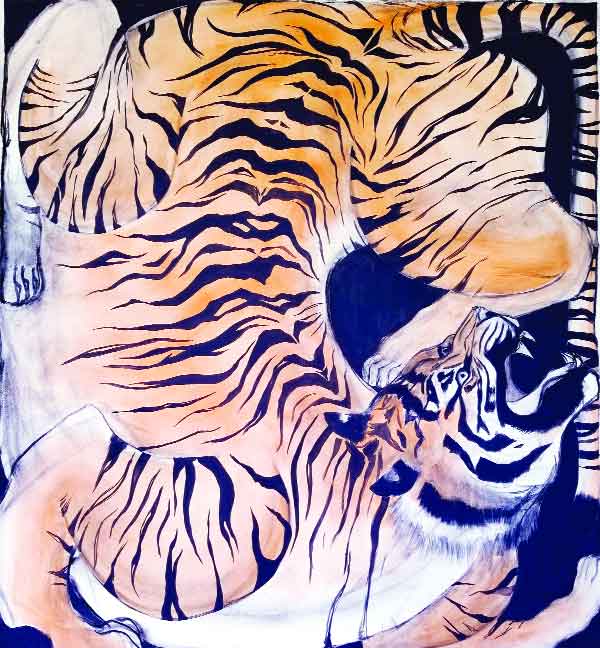 Once in a blue moon you come across a set of works that evokes multiple perspectives. One of the series of artworks at the Delhi Contemporary Art Week at the Visual Arts Gallery does something similar. It is Nature Morte’s solo exhibition of Bhutanese artist Zimbiri that creates a symphony of preludes and nocturnes with her tiger series. Heightened, self-evolved, moody and dramatic, she creates a set of images that reflect the tiger in repose and in a somber mood.

Zimbiri’s works are gentle like the breeze that waft across the mountains. Her tigers speak of great passages in time, a strong sense of physicality, a rhythmic sumptuous beauty of mane and luxuriant stripes that echo the integrity of nature’s perfection.

It certainly makes you think of Dutch Master Vermeer’s enlivening accents of bright white. One thinks of melding the surreal syntax with a minimalist mood that seeks to define the source and dignity of pose and poise. If Head In The Clouds delivers a deliberate message of ascension, the boxed series is a feline lover’s delight. Zimbiri’s tigers seem to float amid harmonious and colourful relationships. Her tigers move beyond aesthetic elegance as their yellow and black stripes and their smooth fur evoke the state of being.

Zimbiri had a show of masks at Nature Morte. This suite of seven studies only on the tiger are in distinct contrast to the brightly coloured compositions of floral or arboreal themes. The pale and seemingly surreal stripes  on these monochrome tigers, done in straw yellow and raven black, may at first appear to have been brushed but close examination shows that a vast swathe of the animal’s hair has been minutely painted into finely woven strokes. The stripes, legs, paws and mouth have been indicated with full, moist lines and you can see deeply expressionist notes in her feline cats that even smile, roar, jump and dance in their framed boxes.

Her works start with the traditional materials and techniques used in Bhutanese art: sa-tschen (earth paint) and rhay-shing (hand-woven canvas). These impart a ghostly presence to the images that she paints, communicating a sense of fragility, as if these traditions themselves might soon disappear. Her art is a perfectly post-modern synthesis, which combines the local with the global and the contemporary with the traditional. Born in 1991, Zimbiri studied both Art and Economics at Wheaton College in the USA.

The soft application of earth paint  and the hand woven canvas, both become materials as well as the media  that result in a gentle, even sensuous looking, feline species.

Zimbiri  renders her tigers with compelling physiognomic accuracy (a practice of assessing a person’s character or personality from their outer appearance—especially the face). At the same time, however, such works reveal the historical progression of cultural interaction and exchange; they function as evidence of the ways in which indigenous cultures incorporate foreign elements, out of which arise new and innovative forms alongside existing traditions. Zimbiri says she decided on the tiger because it is endangered as well as considered precious in Bhutanese mythic history. Most of the animals in their mythic tales belong to the past and the tiger, too, will one day become a species of the past.

She weaves eastern notions and traditions in her work but gives us a modernist moorings that is hallmark of her  tiger paintings. The artist focusses on  the meticulous expression of the tiger’s black stripes. By contrast, the stripes in her paintings tend to be more than just simple black ink lines. She renders them as more two-dimensional giving them an alluring flatness. Since tigers are indigenous to the Himalayas, she depicts them from the blending of realism as well as imagination, as brave and fierce spirits, which makes portrayals of them highly desirable. What is interesting too is that her tigers tend to have different facial expressions and suggestions of temperaments.

In her boxed series, you see the animal filling the entire frame. There is deep harmony as well as joy in the way she creates tigers of conviction blending in space and atmosphere. As an endangered species, she draws attention to what man has done to nature. Globalisation is not exclusive to modern society but is a long-standing tradition. She points, unconsciously, to the truth that a tiger is a cultural and intellectually natural asset. The seven paintings embody diverse traits from different Eastern cultures and tell us that tigers are a valuable heritage of our biodiversity. They evoke the beauty, possibilities of inclusion and diversity, about which we selfish people sometimes forget.

She recalls William Blake’s poem Tiger in which he leaves us in awe at the complexity of the creation and the sheer magnitude of God’s power. The perspective in Blake’s poem involves a sophisticated acknowledgment of what is unexplainable in the universe, presenting evil as the prime example of something that cannot be denied but will not withstand facile explanation either. The open awe of the tiger brings us to the importance of faith in a benevolent universe.

Zimbiri’s tigers reveal the historical progression of cultural interaction and exchange; they function as evidence of the ways in which indigenous cultures incorporate foreign elements, out of which arise new and innovative forms alongside existing traditions. Above all the treatment and technique, the ethereal and ephemeral elements tell us that in art there are infinite ways of seeing and creating.