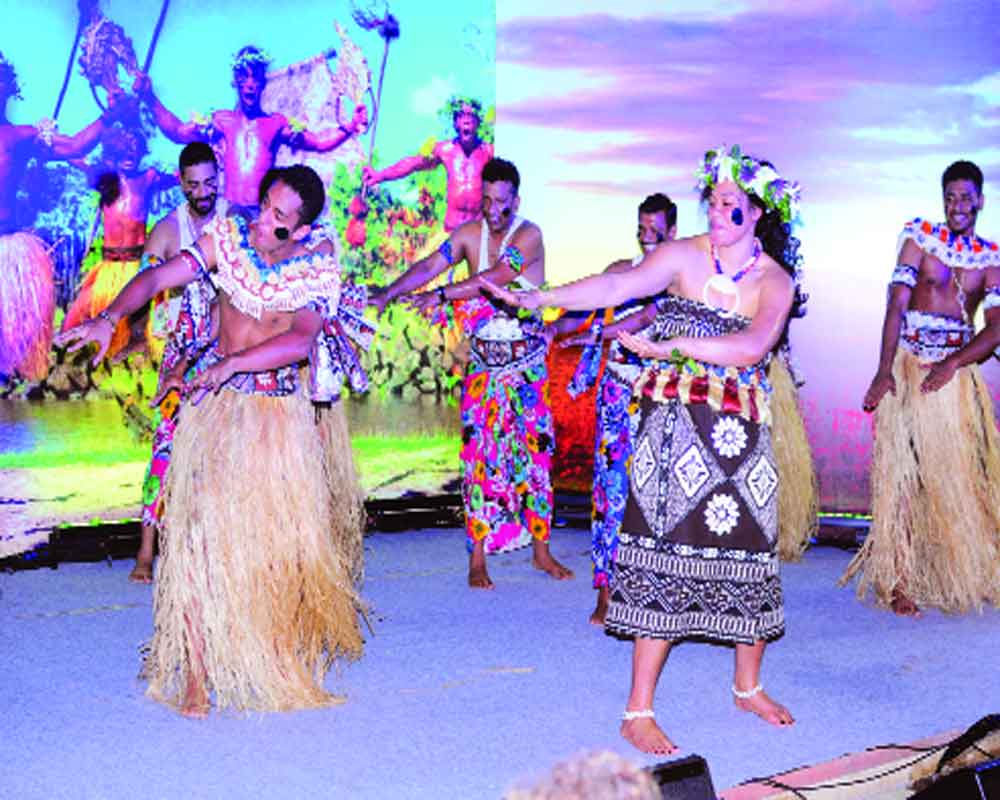 Namaste Pacific placed the culture, food, friendship and fun of the Pacific Ocean countries on display. By Team Viva

Food, music and dance — there are several things that connect Pacific Rim countries. And it was to celebrate all this and more that High Commissions of New Zealand, Australia, Papua New Guinea and Fiji came together. At Namaste Pacific, the hosts donned tiaras on their heads, sported multi-coloured traditional clothes with floral prints — in short — created an ambience that transported the guests across the oceans to these countries.

But the culture trip did not end here. Traditional masks and artefacts which dotted the walls gave an insight into the traditional wooden art as the smoothly-carved antiques hinted at the heritage of these places. Certainly a treat for the eyes.

The guests were enamoured and soaked themselves into each aspect of the culture with love. Fiji’s  traditional dance form which also tells a story was accompanied by rhythmic clapping and drumbeats and created a festive atmosphere as the audience joined in to groove to the music.

To add more charm to the evening, a cultural performance by Aaradhna, a music band from New Zealand, followed. Interestingly, the singer was part Indian and part Samoan. A ripple went around as she was the perfect embodiment of Namaste Pacific. The powerful lyrics of her song created a vibe that was unmistakable as people sung along with the band and waved their hands.

Any country’s culture is steeped into its food and gives an insight into its history and tradition. Naturally an array took the guests on a delicious journey. The meat and vegetables dishes which were slow-cooked in an earthen oven were the star of the evening, which was clearly evident from the excitement of the people queuing up for food. It marked the exchange of culture, food, friendship and fun among the countries.

An exclusive station served Fiji’s national drink, Kava, a muddy, earthy beverage that calms you and numbs your mouth and throat.

The New Zealand High Commissioner Joanna Kempkers who feels India is a strategic region to collaborate with, said, “It is about bringing forth the issues that concern us.” She further highlighted the theme of the festival — climate change and solar energy as they impact the entire world. She stressed upon forming an international solar alliance for the same.

To show their commitment to solar energy and to highlight the theme of the event, there were displays from the International Solar Alliance, Pollinate Energy both of which are based in Australia, Nepal and India. There were solar lanterns from Barefoot College in Rajasthan which trains people in rural areas about the use and consumption of solar energy. People seemed impressed by the displays as they left their feedback.

The event broadened the concept of cultural display of all the countries. Harinder Sidhu, the Australian High Commissioner said, “Along with food and culture we also have games like Rugby for people to try their hands at. It is something unique and unusual.”

Paulias Korni, The High Commissioner of Papua New Guinea was glad about this improved relations with India and wanted to strengthen it. “We have 800 languages and a diverse culture like India. We can strengthen the bilateral and developmental issues and provide assistance in education, medicine, water management and many others,” he added. The Pacific spirit, where like a family, they collectively pooled in their resources to stage the event was on display in its full glory.