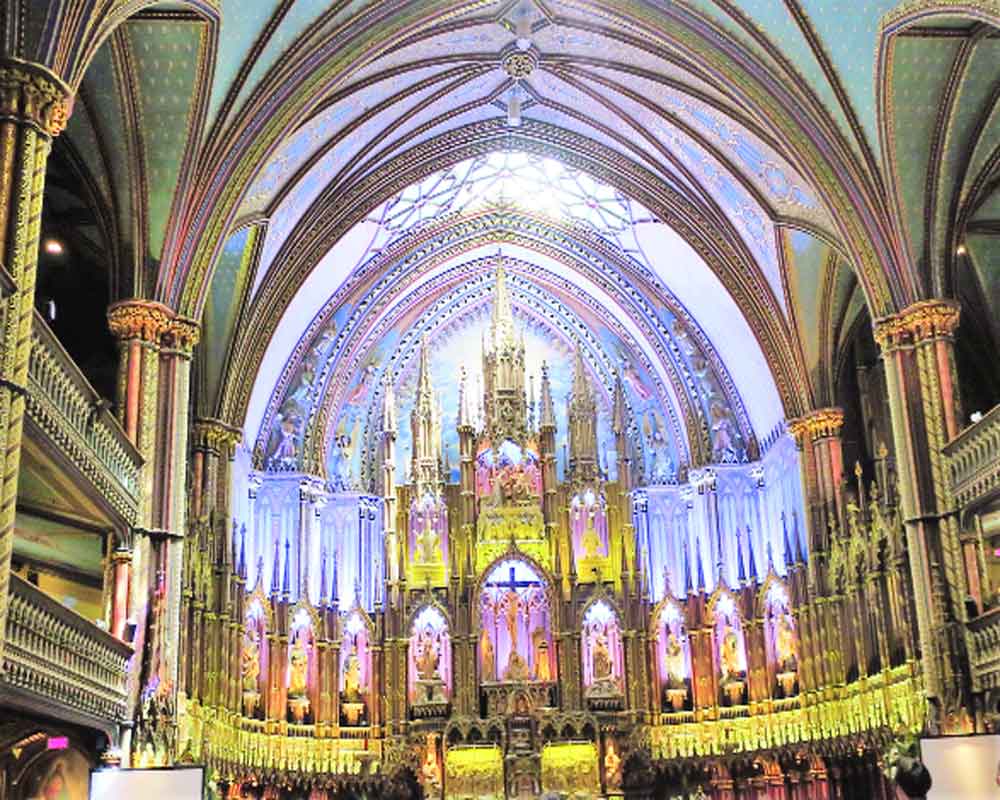 I felt a surge of friendliness and politeness passing through me as I landed at the Airport in Montreal, Canada. As I had an air cast on my twisted leg and had difficulty in walking, an airport worker immediately rushed to guide me to the elevator and lead me towards the immigration area. This was in great contrast to the treatment I received at the previous airport where we had a stopover.

I had heard many amazing and jaw-dropping sights that this city could offer. And my experiences did not make them appear as false. A quick peek at the map made me realise that I was just a few skips, hops and road-trips away from some of Canada’s finest spots.

Situated on the St Lawrence river, the island of Montreal is a juxtaposition of the new and the old. My visit to this former French colony was an unforgettable experience. The city is home to 120 distinct communities. With vibrant people, restaurants, cafes, museums, churches and lush green open spaces, it presents a moving canvas of beautiful landscapes.

In these two neighboring areas of Montreal, we can explore the city’s centuries-old history. One can walk down the cobbled streets of old Montreal and admire the various historical structures that line the streets. If looked closely, one will notice French, English and Scottish influence in the architecture. After taking a walk through those lanes, one can take a well-deserved break in one of the numerous restaurants or cafes along the streets.

The Basilica is a testimony of the city’s catholic roots and the close relationship between art and religion. Vintage wood carvings, slain glass art stained in deep-blue colour makes its interior present a classic example of architectural art, by Victor Bougear. One can also enjoy the various street art performances like classical, vocal and instrumental music at the courtyard in front of the Basilica and at the same time, admire its very beauty.

Mount Royal is an iconic spot which is popularly known as ‘The Mountain’. Apart from being a perfect spot for nature-lovers, bird-watchers and sports enthusiasts, the slopes are home to two of the city’s oldest cemeteries. The Mount Royal Chalet at its top takes one back to the history of Montreal during the Great Depression in 1932. The Kandiaronk lookout in front of the Chalet offers a magnificent view of the downtown area and the mighty St Lawrence.

Founded in 1931 by Brother Marie-Victoria, it has a very thoughtfully laid-out garden with green houses. The botanic is known to be one of the finest and largest of its kind. The collection of plants species here include several exotic and rare herbs. A stroll through its various theme gardens such as the Japanese garden, the Chinese garden, Courtyard of Senses and many more, is an experience that comes once in a lifetime. It is also a source of endless knowledge and beauty.

A day’s trip can be taken to the Quebec city from Montreal through several bus tours which are available. One can also hire a cab for the day so as to move leisurely at one’s own pace. With picturesque cobblestone streets, vintage hut-like houses and cafes by the streetside and live performances in the open spaces along the river front, make this historic city a pleasure to be at.

A visit to its Montmorency Falls is a must too. It ranges from a height of 83 metres, higher than the Niagara Falls. The falls can be climbed up in different ways and a few of them could be really adventurous and thrilling.

One might fear the long eight-hour road journey from Montreal to Niagara Falls, with two to three halts, and call it tedious and tiring. However, the drive through the excellent roads with dense green forests on both sides is a different experience altogether. The ‘Thousand Islands’, which constitute an archipelago of 1,864 islands that straddles the Canada–US border in the St Lawrence River, is certainly a marvel of nature. With 3,160 tonnes of water cascading down the falls every second is a spectacle. The Horseshoe Falls on the Canadian side are awe-inspiring. The ‘Maid of the Mist’ cruise to the Horseshoe is a must.

We spent only three to four hours in Toronto. However, they were enough to absorb in the place’s warm vibe, which is home to various people of different cultures and languages. We could also squeeze in some time to go up the CN Tower, which gives a magnificent view of the city and Lake Ontario. We took a stroll at the the vibrant Eaton Square too.

All in all, one thing I will remember my visit to Canada for, is the friendly vibe of the place and its polite and helping people. They have a great respect for pedestrians. Drivers here would usually stop their cars if one is about to cross the roads (something highly unexpected in India). Jardin Nelson, located in the heart of Old Montreal, is a haven for foodies to relish the combined pleasures of good food, exceptional service and an impressive and breath-taking ambience.