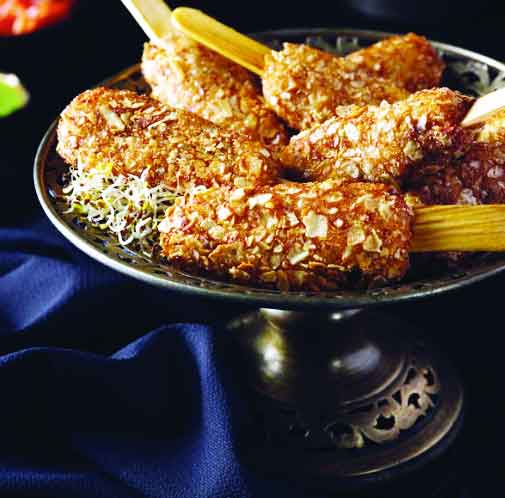 Despite some misses, Wok in the Clouds makes for a comfy place for light bites, says Chahak Mittal

Tucked in one of the many busy and bustling blocks of Connaught Place, Wok in the Clouds instantly took me back to the Keanu Reeves-starrer, A Walk in the Clouds. I wondered whether it was one of those high-concept bars based on a blockbuster. As I entered the place, I realised that it was inspired only by the film’s name. Its vibe was about chic contemporaneity. The heart-shaped mirrors, graffiti and trendy posters about drinking and dining at the entrance were a quirky way to welcome the guests. As I sat on the high-pitched chaise-lounge at the table adjacent to the bar, I observed artefacts and showpieces which intrigued me. Why would a fine dine-in restaurant-cum-bar have three tiny statues of soldiers holding a rope in different positions — climbing up, crawling down and hanging? However, they added to the absorbing aura. To my left were posters of guitar, music signs, and some doodles that said, ‘I Love Binge Drinking.’ Well, the vibrant bar with a colourful glassy slab, lit with yellow lights, and an array of wines, whiskies, spirits and beers, could certainly make that one come true.

As impressed as I was by WITC’s aesthetics, I wondered whether what it served me would match up to the ambience. Scrolling through the menu, I first ordered the puree of wild mushroom soup. The porcini, shitake and button mushrooms-infused off-white creamy soup had a delicate texture. I never had thought that mushrooms could be so distinctly flavourful. Talking of spices, the soup tasted of black pepper that blended perfectly with a variety of bland but fresh mushrooms. The soup was served with two cigar rolls and a chilli oregano dip, which complemented the soup’s comforting taste.

It was time for the Minestrone. The broth filled with finely-chopped bits of tomatoes and vegetables, kidney beans, dry spaghetti, rye bread and garlic butter had the right amount of tanginess which made the right impact. However, an excess of garlic meant the soup couldn’t quite make the cut.

Next up was the Aloo chakna chaat. As eager as I was for this dish to arrive on my table, my interest fell flat as I bit into it. With wheat crisps (sev) and pomegranate sprinkled on top, the chopped potatoes dipped in sweety-spicy tamarind sauce and tasted exactly the way it was described, nothing less or more. I wished there was extra zing to the dish. After all, why would I pay Rs 225 for an Aloo chaat that I could relish at just Rs 40 at the street side? Also, the latter would have been aptly spicy.

The Rawa dal tikki followed. I chose to order the dish as the thought of a tikki being served with Matar ka hummus, rather than the conventional mint chutney or meethi saunth, instantly drew me towards it. Well, it didn’t disappoint me. But the problem lay at the heart as the tikki, due to its blandness and dry texture, failed to make an everlasting impression.

Next in line were the crunchy dahi sticks, or the Dahi kebabs. The previous two dishes were responsible for a taste graph that was sliding down fast. However, it’s rightly said, good things come to you when you least expect them. The kebabs, wrapped around wooden ice cream sticks, were presented in four vodka shot glasses. Its appearance had made a mark. Now was the time for the more important test — taste — and it passed with flying colours. It instantly melted in my mouth which was soon awash with the creamiest filling. Served with a mint chutney, the kebabs were made with lavash which is a soft, thin unleavened flatbread cooked in tandoor. Most food experts say that giving a shape to dahi kebabs is the toughest part while preparing them. However, here, even the shape was 10 on 10. Certainly, the tastiest dish of the evening.

To accompany the sweet and salty dishes that I was having, I ordered the scented black currant sherbet which had kokum, black currant, cumin in sparkling water. It was the perfect refreshment. I sulked at the thought that I could have ordered it earlier. Its juicy, spicy and tangy texture made me forget all my woes of tasting imperfect dishes on an evening when I craved for some lasting delicacies.

Then came the spicy golden paneer fingers in two ways — peri peri and pesto. Now as we know, the mere mention of paneer excites a vegetarian. However, to my surprise, the long cottage cheese fingers didn’t arrive in ‘two ways,’ rather came with two flavoured dips — creamy green pesto and peri peri sauce. Well, one bite into the dish and there occurred an epiphany — there’s nothing worse than sitting down at a cafe, ordering a dish, pining for it and being miserably disappointed. The dish was bland and even the dips didn’t help.

As full as I was, I didn’t want to miss the desserts. I ordered two out of the four in the menu — Apple pie and Sizzling brownie. While the latter amazed me with its remarkable presentation and taste, the latter did a great job at fulfilling my cravings. Just a few words for both the desserts — taste it yourself and feel its extraordinariness.

Though the place had its misses, a certain joy remains preserved there. It has a quiet, personal yet, at the same time, a strangely social vibe, making it ideal to catch up with a friend after years. Another thing that can be said in favour of the place was the service which was impeccable.