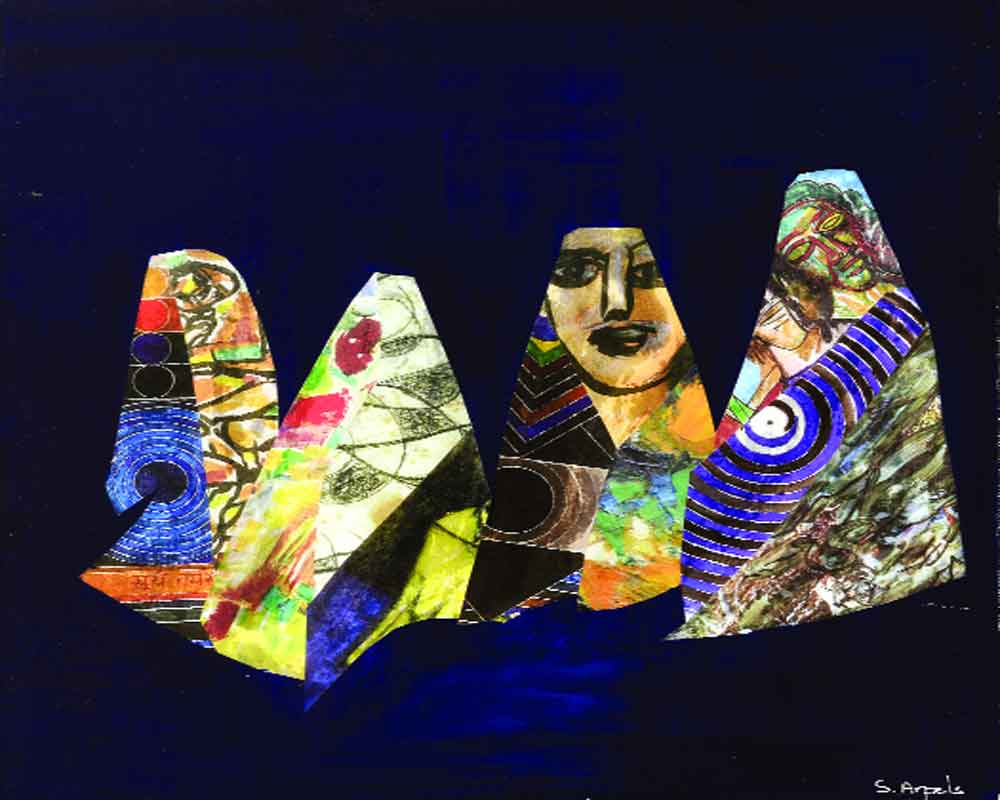 French artist Stéphanie Arpels’ series of paintings, Women Passing, reveals how the rustic rhythms of Indian femininity resonate with her own. By Uma Nair

Gold, an intrinsic part of women’s social traditions, religion, rituals and superstitions, is the most overpowering element in all the canvases of French artist Stéphanie Arpels. There are women resting, squatting, dreaming, moving, marvelling and walking. Through red, blue and black, her canvases unveil the sensuality of women’s bodies as well as emotions like love, anger, power and joy of living which they experience.

Stéphanie’s exhibition of artworks, Women Passing, at the Visual Art Gallery, India Habitat Centre, is about her observations of Indian women.

Stéphanie understands the trials and tribulations of her subjects. Among the many places in India that she has visited, it’s Rajasthan — the odhinis of colour and the silhouettes of a woman sitting on the Jaisalmer sands — that has created its own resonance within the artist’s realms of  experiments with truth. Cohesive, compassionate and coherent, these studies of women are both tensile and tender, speaking to us about so many sojourns across the passage of time.

The women of Rajasthan

The squatting women seem like subjects that live in their own utopian fragments, lost between human desires and their own reality of struggles. When asked what drew the artist to them, Stéphanie explains, “I am intrigued by the posture that they seem to be able to keep for hours, as if time has been suspended, and in the middle of nowhere. One cannot help but wonder what they are waiting for? What are they thinking? What are they feeling? What are they expecting?”

Stéphanie’s women are subjects who retain their anonymity. And even though they are very much the people of their own spirit but they could belong anywhere. She uses resin, collage and acrylic on canvas to fashion them.

She says, “I paint with acrylics to create depth, textures, shades, patterns, layers, light and shadow. In some of my canvases, I create collages from the works of famous painters that I admire to give more importance to my Indian women. I associate Western and Indian masters to highlight my European roots in an Indian context. It is also a way to translate my Western perception of Indian heritage as my collages represent the traditional sari. More recently, I have introduced resin to emphasise contrasts and to improve the perception of saris.”

As a universal subject, the artist is also a diarist in some ways and she makes you wonder — are women sharing similar lives at different places?

Stéphanie answers, “Yes, I believe so. For me, women share similar lives all around the world. They are born, they become children and teenagers, then adults, they get married and give birth, then they mature and pass towards another dimension. All women have similar questions about who they are, their place in the world, and where they are going. While their daily lives may be significantly different, deep down, they all feel the same emotions.”

When you look at the works as a whole, you are curious about knowing what is it that spurred her  sensitivity towards these women. She elucidates, “I am a woman too. As a result, I asked myself the same questions. In addition, I suffer from a life-altering disease, which impacts me a lot. It has made me more aware of the world around me and of the different dimensions that surround us. It has also made me more conscious that life is held only by a thin thread. This extra sensitivity has made me think of the journey of women in India, since 2015 when I made New Delhi my home. The energy and spirituality of women in India move and fascinate me. I feel that I am one of them too.”

“Maturity is the ability to live fully and equally in multiple contexts,” poet and philosopher David Whyte wrote in one of his most beautiful meditations. A generation before him, Anaïs Nin took up the subject in her diary, which is itself a work of philosophy. She wrote, “If you intensify and complete your subjective emotions and vision, you see their relation to others’ emotions. It is not a question of choosing between them, one at the cost of another, but a matter of completion and inclusion.” Stéphanie’s works reveal how the rustic rhythms of spirituality of Indian women resonate with her own.

In appreciation of her art, French Ambassador to India, Emmanuel Lenain, says, “Through Stéphanie Arpels’ works, we celebrate the harmonious meeting between an artist and a country. She creates a connection with the strong spirituality that surrounds us and richly uses colours to capture the incredible energy of Indian women. We are delighted to see that the age-old bond between India and France continues to deepen through her works.”