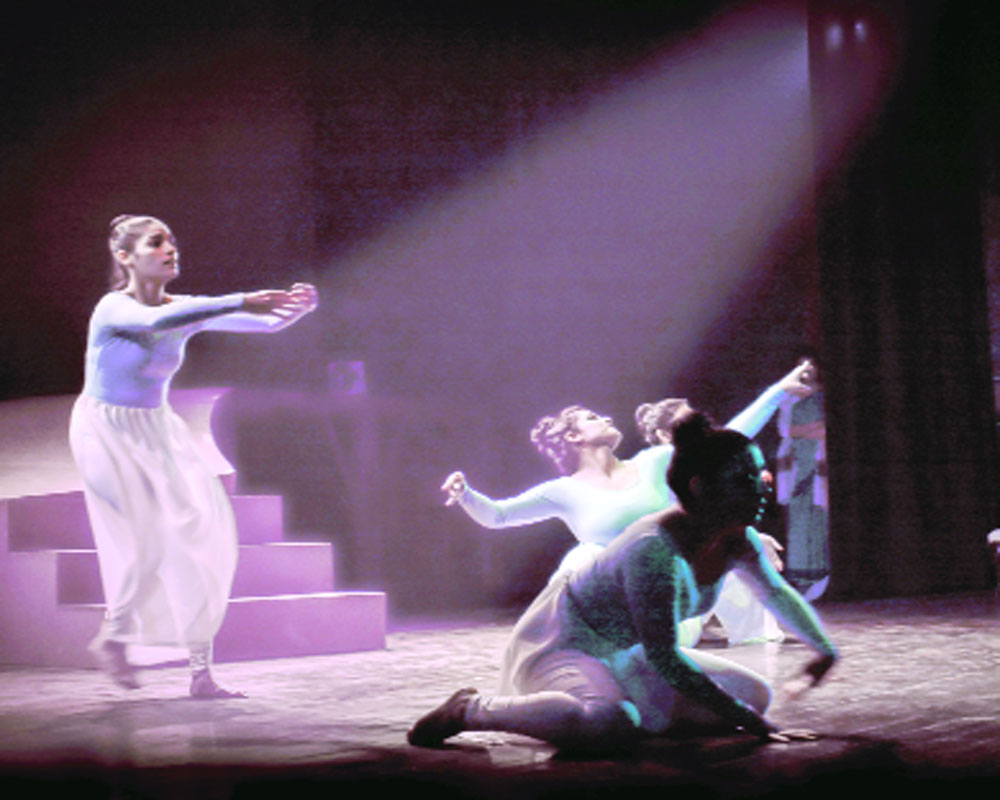 Director Kaushik Bose recreates Tagore’s Shesher Kobita as a play and weaves into the plot some unuttered musings, verbalises them through dance movements and examines numerous ideas of relationships in society. By Chahak Mittal

William Shakespeare and Rabindranath Tagore might have lived in two different contexts and eras but their language of exploring the depth of human psychology and emotions has been more or less the same — and ever-relevant. They both have touched the core of universal emotions and been recreated through the times. Even if one would try to quote some of their words penned ages ago, it might seem as if they were written just yesterday.

However, just as Shakespeare has been globalised, reinvented and reinterpreted over the ages, director and playwright Kaushik Bose feels that Tagore hasn’t been redone to the same level. But apart from Bengalis, “who won’t let him go that easily,” he belongs to everybody. Which is why Bose has adapted the writer’s classic Shesher Kobita (1929), the most stirring rendition of modern love, into a stage play as Poem of An Ending.

“This is not just a stage adaptation of the classic, but also an attempt to present Tagore in a new-age format and take him to a wider audience that the Nobel laureate deserves. Also, this story has never been done on stage, which was a challenge as well. And of course, never in English. It was made into a radio play a long time ago. But Shesher Kobita is a timeless story that has stayed with me over the years and since the time I first read it. Everything — from the story to its multi-layered ideas of love and human emotions, and the various styles of all its characters — the book still lives. So  why not Shesher Kobita?” says he.

The story, which examines man-woman relationships and the institution of marriage in India, revolves around Amit Ray, a barrister educated at Oxford, whose intellectualism turns so self-destructive that it, in turn, makes him stand against all forms of tradition and social institutions. When he meets Labonya in a car accident, their romance later builds up in the misty hills of Shillong. Through a series of dialogues and poems, it blends their two disparate worlds — Amit’s iconoclasm and Labonya’s sincerity and simplicity. But the question remains, will these two worlds finally meet? The play, hence, explores the realities of love as romance and marriage in the Indian society. The plot is also supported by Ketaki, Shovon and Yogmaya who play critical roles in this story of love and class conflict.

Bose says that the story presents an unfathomable number of ideas about love. “Amit is a flighty kind of a guy who looks at love like a 360-degree high arc. He has a sense of ‘I’ in him, which makes him forget the other, which is why it leaves Labonya feeling cast aside. On the other hand, she is far more dedicated but keeps her eye open rather than falling head-over-heels with Amit. And the terms of love have an altogether different meaning for her. While Ketaki believes that everything is fair in love and war, Shovon, on the other hand, is far more calmer character for whom love is more like a sacrifice and an offering to god,” he says and goes on to add that this is the biggest factor that makes the story relatable even today.

Why do love stories remain eternal, he asks, irrespective of their language. “Because love has a very universal definition and meaning. The ways of expressing it might be manifold and ever-evolving today as compared to the yesteryears, but the idea of love never changes. Emotions remain the same throughout. Hence, love stories stay evergreen. And here, all the protagonists have also remained relevant because you can easily come across all these characters even today.”

One of the biggest advantages (as well as disadvantages) of being the first-time presenter of a story that has never been staged before is that it gives you the freedom to experiment and at the same time leaves you clueless about how to begin. However, turning the tables around, Bose’s “original” and “creative” element in the play was to weave dance movements into the plot in order to take it ahead and explain some things which are better left unsaid. The director, who believes in writing his own scripts and allowing himself a sense of creative freedom through that, says, “The play is presented in a format where every lead character is represented by an actor and a dancer. Each of these characters are blended into each other yet are distinct. So it is their unspoken personal musings that the dance in the play aims to verbalise. And irrespective of the characters, all the dancers are women.”

But why? It’s because the feelings, which do not need words to be uttered, need a more gentler way of expression. “And that could only be done by women,” he says with a smile and adds that the combination acts as a metaphor for love and represents it as “genderless and universal.”

Hence, the stage is set in a multi-level structure, one where the dances acquire the space and the other where the transition of different phases of each character takes place — from London to Shillong and from love to marriage.

For Bose, the enactment certainly was more of a challenge than his previous directions — one of them being an adaptation of Devdutt Pattnaik’s The Pregnant King. “The play has no major dramatic element or conflict in it. The premise of the entire story is very humane and realistic. Hence, it leaves no room for exaggeration. And adapting a book into a play is certainly challenging given its theme. So it had to be subtle yet valiant. I even rewrote Ketaki’s character a bit differently than the one in the book to keep it ageless as I felt it won’t relate as much with the current generation. I changed some of her characteristics.”

(Presented by Theatreworms Productions, the play will be staged at 7 pm today at Shri Ram Centre.)