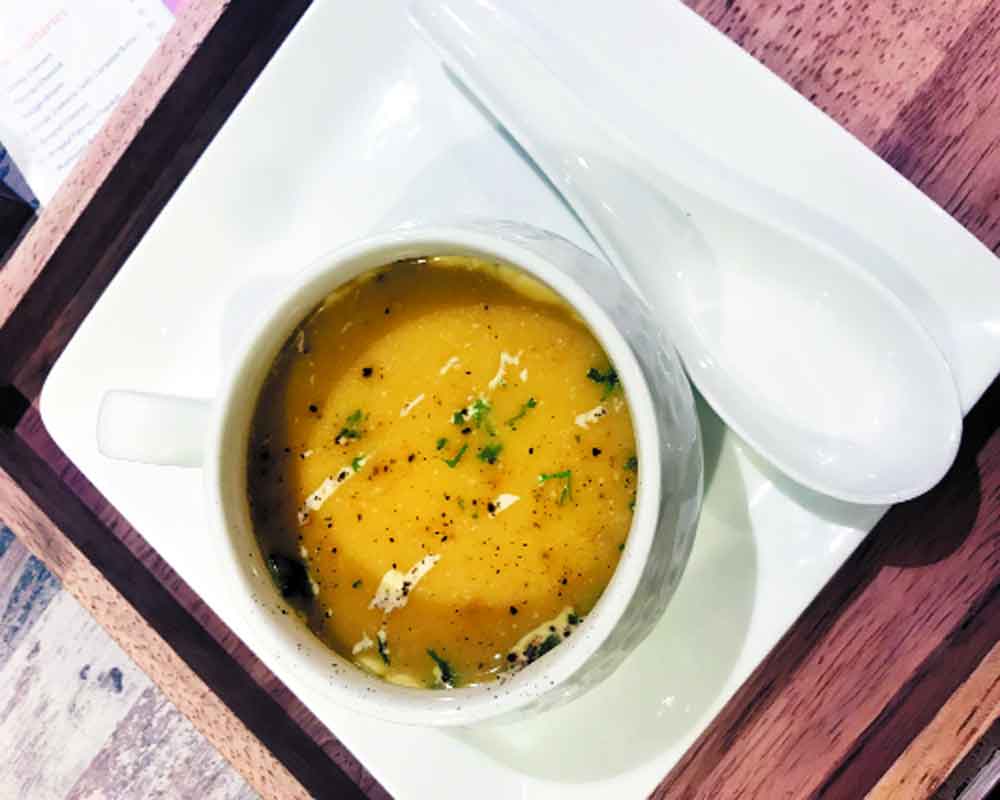 Once in a while one finds something interesting by accident. It happened to me recently when exploring the white, wide and winding blocks of Connaught Place, I stumbled upon the red-and-grey gates of a French but surprisingly vegan café called the Brioche Dorée. The fact that it was a Parisian bakery café was reinforced by its glass window sills at the entrance and yellow-striped and grey walls. Of course what made it more attractive was that I could keep my Navratra pact intact.

Unlike India, Continental food does not have rice, curry, lentils or pickle but even then the croissants, baguettes and tarts seemed to hold warm memories of home. I began with Spinach and corn quiche. Those who dislike vegetables should absolutely try this one. It might change your perspective on veggies. The quiche was served hot with baked cheese over the top and crushed spinach and corn as its filling. It was scrumptious and I can vouch  that I could go back to eat it even on a full stomach.

Next up was the exotic Pesto sandwich which had an abundance of ingredients and vegetables. However, my heart still lay with the quiche and the second pick couldn’t compete with my previous one. Surprisingly it didn’t even come close to to it. A classic French pesto bread, the burgwich, was stuffed with exotic greens like pumpkin and bell peppers, coated in pesto mayonnaise. Its filling was indeed fresh but the sandwich couldn’t make a mark on the taste quotient. Truth be told, I was left wondering what it tasted  like. This made me a little apprehensive if the next dish would turn out to be unusual or at least, better than this one.

I was curious to try some of the beverages like a fruit Sangria or a Masala Iced Tea, but I skipped the page and turned to soups. Making a choice between tomato and basil soup and its Navaratra special Pumpkin Soup was quite difficult. Eventually, I chose the latter. Presented in a white coffee mug, the yellow-coloured, creamy soup, with roasted baby pumpkin, was garnished with fresh cream and Italian parsley. It tasted like a throwback to the times when we had fallen sick and our mothers would prepare something soothing and warm to nurse us back to health. But if you think it was tasteless or worse ‘sickly’, banish the thought. It was something that one can happily embrace even in health.

Moving ahead, I ordered a Classic Croissant. The flaky pastry, layered with fine French butter, made its way to my heart at the very first bite. Crispy on the outside and soft inside, the croissant looked and tasted fresh. It could make for a simple and delicious start to the meal at this place. Or even feature as a great breakfast.

The Roasted Veg and Olive Pizza was the next in line. What made it stand out was the base which was puffy and flaky like a patty rather than a regular pizza. It was crispy and seemed to become even more so with every bite. Layered with pilati, topped with cheese and oven-roasted veggies like olives, mushrooms, bell peppers, and pumpkins, the rectangular pizza seemed to be a blast of exotic flavours in my mouth.

I was moving towards the end of a satisfying meal and ordered the Mexican Burrito bowl. The dish had the best of everything — layers of fresh ingredients, rice flavoured with spices, olives, kidney beans, finely-chopped tomatoes, a few nacho chips with white mayonnaise to complement it, chopped coriander, chipotle chilli along with crushed cumin and salt. If only I could describe its flavourful taste! The bowl was irresistibly delectable and nothing like anything that I have tasted before.

It was time for the desserts, which I couldn’t resist since I was already impressed with what I had till now. I ordered a Chocolate banana tart and a Caramel romance cake. The two put me in the ultimate dilemma —  because there is absolutely no way that I can compare the two or even  choose one. Each scored brownie points on its own strengths. While the former was not just picture perfect but had a perfect tart crust, crispy and smooth, with dark chocolate and banana slices complementing each other; the latter, was a burst of caramel and milk chocolate. If one sentence could describe what I went through, it is  sheer gluttony. I polished off both without leaving behind a scrap. Never mind the diet I have been planning for a while.

Deeply satisfied, the epicurean delights left a deep impression on me. I certainly believe that this place, manages to blend the best of both worlds — French perfection with Indian flavours — which makes it extraordinary. Now I know, what the other Brioche Dorées around the world would taste and look like — heavenly.