Finding joy in the ordinary

Finding joy in the ordinary 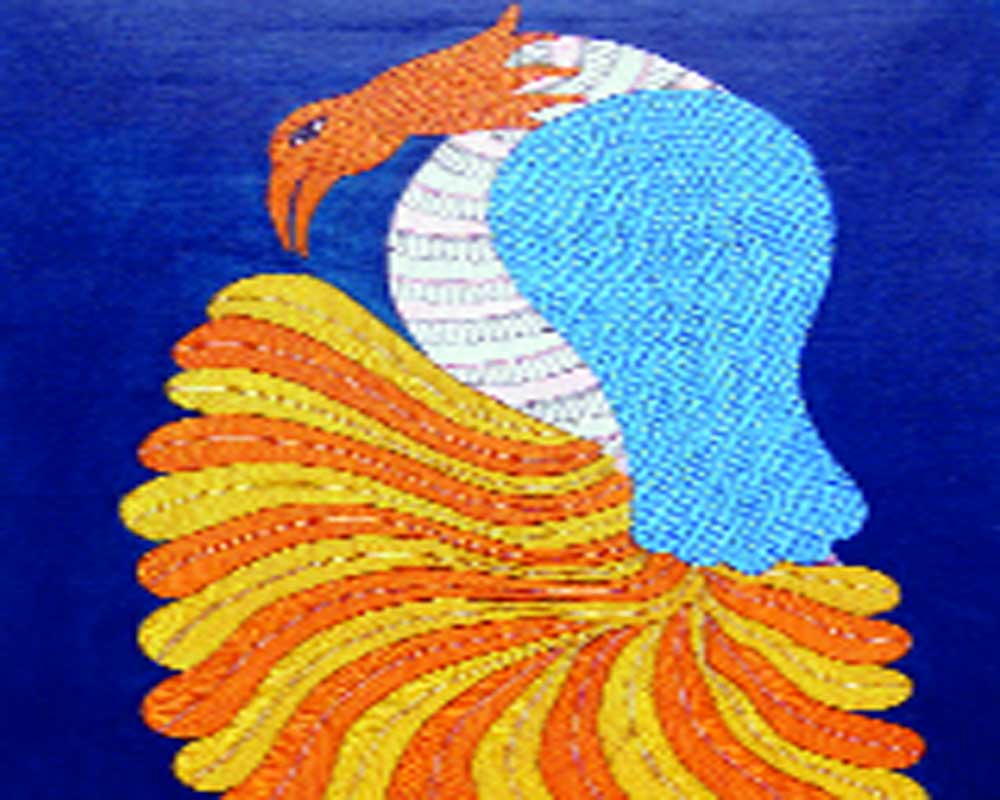 Artist Japani Shyam says that even though galleries have now started to exhibit tribal art, there is still a long way to go in making a Gond mural a statement piece

As they say, “Viewing a good painting begets good luck.” The belief forms the basis of Gond art which represents the ancient tribal art forms of Madhya Pradesh. Artist Japani Shyam, daughter of famous Gond artist Jangarh Singh Shyam, is all set for a solo show   Tribal Traditions. She says, “I like to delve into the meaning and significance of flora and fauna in Gond art. My world is mostly inhabited by animals and rituals. I integrate nature through forests in which these animals live.” Like her father then, Japani too narrates stories of nature, though she believes her style differs a bit. “That is the beauty of Gond art,” she says, adding, “Every artist has their own unique language. While my father had more variation and complexity in his sketching, I draw straighter lines.” Her colour palette is also different. Using darker and subtler shades, Japani’s work is cleaner, quieter and almost meditative.

Using brushes and colours that Japani’s father used to give her, she painted regularly, even while accompanying him to various galleries and exhibitions. She soon began assisting him as well. However, the motif that inspired her most was that of trees. “My work is nature-based but my designs are purely by imagination. None of the forest creatures is really a copy of what they look like in real. I sketch free hand and whatever shape the creature takes in my mind, I go freely with it. It should only appeal to me and please my eyes,” she says.

Indeed, it is tradition and legacy that Japani is carrying forward that of her father who is credited for creating a new school of art in India called the Jangarh Kalam school. “I was always around my father even as a seven-eight year old, totally enamoured by his paintings, especially the way he used to tell folk tales through his art,” says the 30-year-old, who also has achieved FICCI Young Achiever’s Award 2018.

The artist has won several accolades but the one that is closest to her heart is the Kamala Devi Award that she won at the Crafts Museum when she was 11. “That was the beginning of my journey as a serious artist,” she says.

Though Japani admits that she has consciously carried forward her father’s style, in terms of figures and designs, she has experimented too to carve her own niche. One of the styles she has come with is white-on-black style of painting. “Also, I want to start working with natural colours once again, even though they are very tough to get now.” Her main aim is that Gond art continues to flourish and receive bigger recognition. “Every household in Patangarh, my father’s village in Madhya Pradesh, has an artist who continues to make quality art but so many of them are not recognised. They are not able to communicate with the mainstream market and often fall prey to middlemen.” No wonder why Japani credits her father for all her success. She believes that the struggle for a tribal artist is much less now than it was in the olden times. “My father worked so hard to make Gond art a well-known name and paved the way for me. Now galleries have started showing tribal art but still there is a long way to go. I want to take it to new heights.”

(The exhibition starts from August 22 to September 22, 11 am to 7 pm at Gallerie Ganesha.)