From the ground up

From the ground up 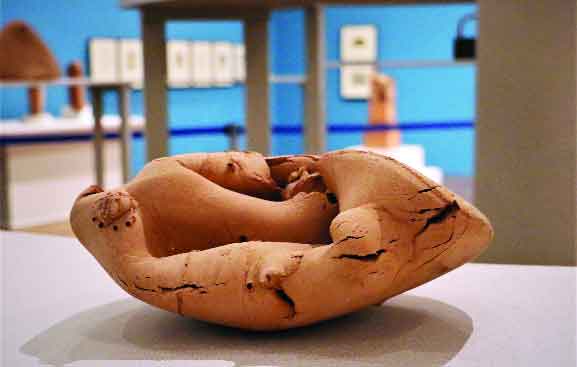 Himmat Shah’s deep understanding of dimension and dynamics is evident in the display of his terracotta works at Bihar Museum, says U Nair

The generous 5.3 hectare plot along Patna’s Bailey Road allowed for a variety of site planning approaches, while demanding sensitivity to its low-scale surroundings and prominent tree growth. Architect Fumihiko Maki has recreated an art oasis, like the National Gallery of Art in Washington DC, in the country with the Bihar Museum in Patna.

To witness Himmat Shah’s retrospective by chief curator Roobina Karode of KNMA, at its temporary exhibition space at the Bihar Museum, is an awakening about the creativity of the artist in his lifetime of 60 years where he kept reinventing himself. This shows the evolution of Himmat Shah. Of course he and Roobina share the relationship of an artist and a critic which goes back 30 years and gives a deeper understanding of his oeuvre. At the Bihar Museum it is the terracotta sculptures of Himmat that entice the eye.

The setting, too, is of importance for architect  Maki conceived the Bihar Museum as a “campus” — an interconnected landscape of buildings and exterior spaces that maintain a modest but dynamic profile, in harmony with existing site conditions. For Mohammed Yusuf, director of Bihar Museum, the space lends itself to many kinds of discourse. “A large number of visitors tell us that art is being valued and appriciated. Each programme zone (entrance/event, exhibition, administration and children/educational) has been given a distinct presence and a recognisable form within the complex,” states Yusuf. The various zones are linked together via interior and exterior courtyards and corridors ensuring that all spaces retain a connection to the surrounding landscape while remaining sheltered and comfortable throughout the year.

There are sculptural wonders that embrace both still life and restrained rotund compositions which cover the entire spectrum from quaint to curious. The terracotta works speak of ferment in the oldest medium of art — the humble clay. The works give a deeper understanding of the sculptor through a careful analysis of his hand-moulded terracotta models. These not only shape his artistic ferment but also showcase his inner rumination of simplicity born of history and memory and experience.

Himmat’s deep understanding of dimension and dynamics come into play when we see his terracotta compositions. The circular orb with a large aperture is a catalyst for combustion in terms of ideation. We can imagine how he began by rapidly modeling small clay forms in geometry and symbolism with his own hands. Fired as terracotta, these studies are small yet expressive works in their own right. Together with small monochromatic drawings, they preserve the first traces of Himmat’s fervid imagination and unique creative process that evolved into some of the most quaint and curious sculptures in tone and timbre.

The small rotund form with folds, a sliced image of a bottle and other works in the exhibition retrace Himmat’s unparalleled approach to sculptural design and his use of vigorous clay studies in directing the language of his own solitude when he began working in the studios of Garhi in Delhi. The terracotta panels in this exhibition offer viewers a more profound insight into the artist’s dazzling, creative mind and his impact on the fabric of texture in a medium that is as ancient as civilisation itself.

Solitude and the studio

“I worked in terracotta because it was full of possibilities,” says Himmat. The mind and the hands both work in sync because you can see that he examined problems of construction and design by modelling damp clay with his fingers and tools with incredible dexterity. It is amazing to think about his perseverance and his patience as he created works in the solitude of his own studio and how he would decide carefully on the perspective of his magical terracotta compositions. It is Himmat’s underlying understanding of both modernism and the power of contours that we see in his brilliance and his ability to sculpt in clay. Just a few pieces of terracotta are enough to showcase his range as a modeller in this historic museum in Patna.

Himmat’s terracotta pieces  divulge an impassioned imagination and also raise the curtain on the deeper intensities of sculpture-making. The beauty of these works is that occasionally, he also presented both finished and unfinished models. The rough hewn edges speak of the testimony of time and the power of juxtapositions in the creative process. These explain the evolution of Himmat’s work, as he shifted between media like bronze as well as drawings.

At the Bihar Museum, it is the few but small terracotta works that create a rich, unique experience for visitors because they speak of the ethos and essence of time and continuity. They also reflect the truth that Himmat Shah is a modernist who has worked in the solitude of his own penumbra for 60 years, and it is time that the Indian market wakes up to the tenor of his genius.