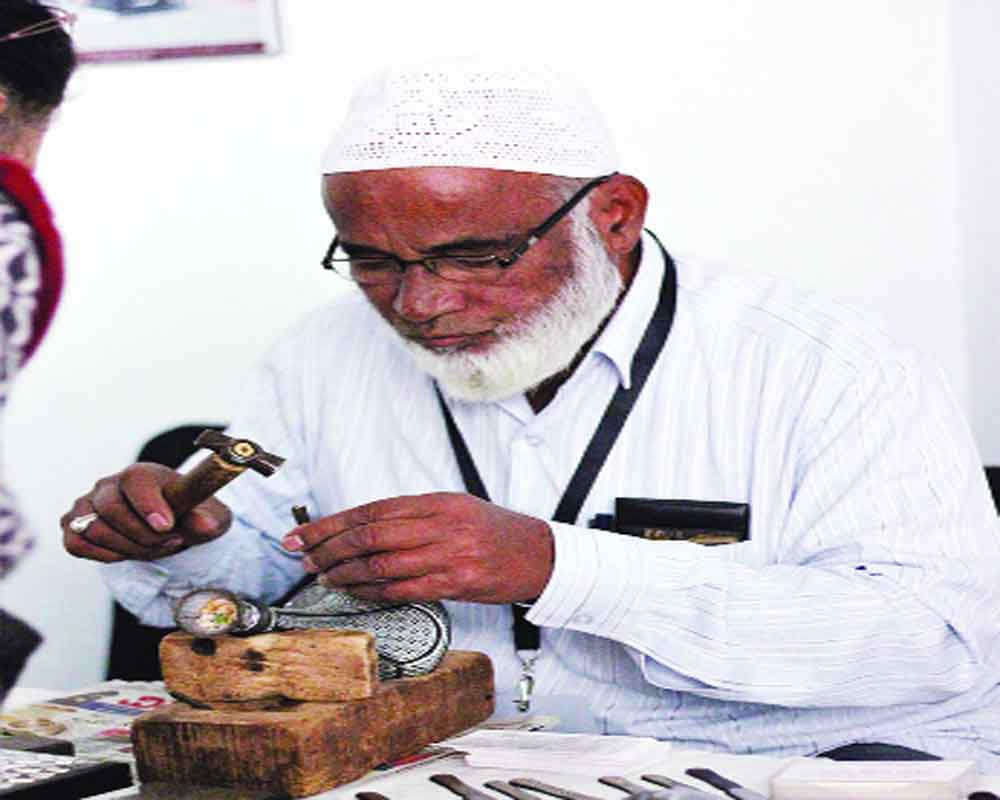 The craft sector has gone through many phases of transformation over the years, and many believe that there is an emergence of a new culture which at the same time retains tradition. With the success of India Craft Week held for the first time in India last year, the Craft Village has been invited for an exclusive preview to showcase 10 rare crafts from India at the forthcoming fifth edition of London Craft Week.

“The preview has a montage of 5,000 years of rich heritage of Indian crafts in wood, textiles, metal, narrative art, weaving and much more in form of exhibition, workshops, demonstrations, talks. One can experience the finesse, beauty and style of timeless treasures,” says Iti Tyagi, founder of Craft Village.

the best part for the visitors is that they can learn these skills from the master craftsmen. Iti says, “Most of these rare crafting skills have either been lost or forgotten as very few masters practise them today. It is an opportunity for all the visitors to explore and learn these rare and authentic techniques from award winning masters, using a range of traditional material, media and processes. Interestingly, most of the techniques are tactile in nature and help one concentrate thus giving people a break from the digital world in order to do something which is more humane, sensory and experiential.”

All demonstrations are hands on and authentic material would be provided by the master craftsperson for each of them. This helps each participant to explore their modern creative and imaginative ideas using authentic traditional techniques. The demonstration will have six craft forms:

Master Rashid Qadri is a dynasty craftsperson who has been instrumental in reviving Bidri silver crafts. He has innovated new methods of carving, inlaying and finishing of metal inlay in zinc and copper alloy with silver.

Master Majid Mir, one of youngest Kashmiri weaver comes from the family whose forefathers had evolved and innovated calligraphy weaving in Pashmina centuries back. Being a National award-winner and having developed finest weaving techniques in Urdu calligraphy, most of his shawls talk about heaven on earth.

Gold medal winner, master Lalita Vakil has been one of finest craftswomen to practice this embroidered form in region of Chamba valley, inspired from pahari miniature paintings. It is only form of textile which has no wrong side.

Master Gafoor Bhai Khatri is the last generation to practice this intricate textile craft. He was recently conferred with a Padmashri, the fourth highest civilian award of India for protecting and reviving this craft in 2007. The Rogan craft practiced by the master (looks like 3-D printed textiles) is done in natural oil colours using a stick.

Master Om Prakash Galav comes from a community called Prajapati, who has been engaged in Ramgarh clay and pottery for many centuries. Besides being a National award-winner, he has many international records to his credit for making the world’s smallest pottery to the largest hukkah.

Master Kalyan Joshi hails from Bhilwara, Rajasthan. The Joshi comes from “Jyotshi” meaning astrologers and he is one of the seven authentic phad artists practising this art form in the world. He has been conferred the National award and many other prestigious accolades. He has also helped in creating wall narratives using this art in various villages across India on conserving water, sanitation and planting trees.

(London Craft Week will be held between May 8 and 10 at Hyde Park, London.)