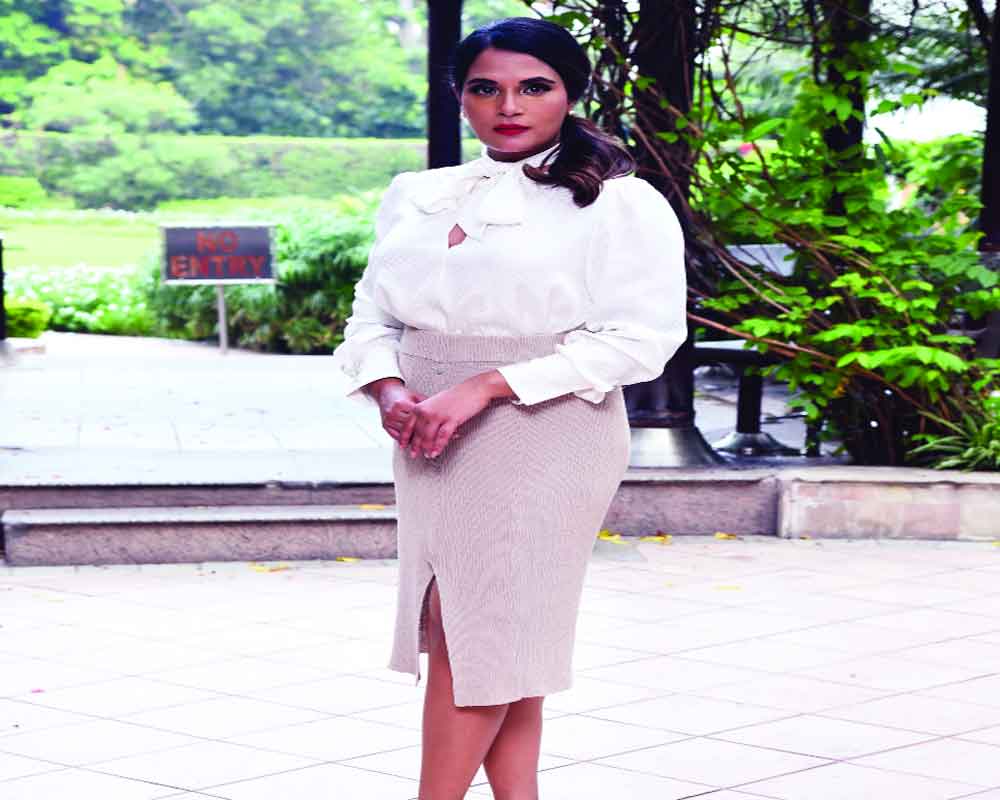 Actor Richa Chadha tells Ayushi Sharma how her forthcoming film, Section 375: Marzi Ya Zabardasti aims to initiate a dialogue around the stigma that rape survivors face in our country

The conversation kicks off quite effortlessly when actor Richa Chadha, on hearing that I work for this newspaper, immediately takes a shine to me. In the blink of an eye, she recalls her “good, old” college days when she interned at the daily in the same section. “I have a stack of newspapers with so many bylines,” she reminisces.

The discussion continues about her experiences in journalism and then turn towards her forthcoming film, Section 375: Marzi Ya Zabardasti, opposite actor Akshaye Khanna. This section of the Indian Penal Code defines rape as a criminal offence and states that a man is said to commit rape when he has sexual intercourse with a woman against her will or without her consent or if she is a minor. “The whole film rests on the subject — can a lie ruin all the truths? Who do you believe? The guy who says that he didn’t do anything or the girl who says that he raped me,” asks Richa.

The film revolves around a filmmaker, who stands accused by a member of his female crew of having raped her at his residence. The case draws unprecedented media attention as arguments between the criminal lawyer (played by Akshaye) representing the accused and the public prosecutor Hiral Gandhi (played by Richa) representing the victim heat up as they produce undeniable evidence proving their respective clients’s innocence. The question remains — will justice be served?

Richa’s understanding of her character is that Hiral is a very passionate and idealistic girl, who has just started her career. She wants to prove a point. She believes in “nailing” the bad guys. “When we start our new jobs, we have so much idealism and enthusiasm, and slowly we get jaded or cynical. So she’s all new to the world of justice and Akshaye sir’s character has been her mentor. She’s his prodigy,” the actor says.

A film like this could be extremely draining and if one doesn’t catch the vibe of the character right, one can start off on a wrong footing. The leads very well knew that they needed to imbibe the energy of the film to crack it correctly. And thus they strategically kept their conversations to bare minimum while shooting the film. Richa’s rich repertoire is a testimony to her versatility and strong acting chops. In this film, she found it necessary to allow the simmering tension to feel authentic. During her prep and through the workshops, she and Akshaye kept their conversations limited to the film and its plot. Their workshops too were laden with heavy work — rehearsing the monologues and debating the stances for the courtroom drama and quite early on, she realised that the right approach was to keep their off-screen camaraderie to bare minimum.

Richa says, “Thankfully, when we started the film, we barely knew each other. So when we started shooting, it was a thoroughly professional relationship. Akshaye is a brilliant actor, who knows his character like the back of his hand. The energy is hostile and the past equation between them gives context to their hostility. Because Akshaye and I are shown to show a professional and cordial relationship outside court.”

Bholi Punjaban of Fukrey has no confusion when she talks about how she understood her character and its various layers. “If there’s an accused and s/he cannot afford a lawyer, the government will provide a public prosecutor, which is the role that I play. I have to prosecute on behalf of the girl who hails from an economically-weaker section of the society,” she says. While one might get perplexed about the roles of a defendant and a public prosecutor in the court and not understand the difference, she explains, “A public prosecutor is a law officer who conducts criminal proceedings on behalf of the state or in the public interest. Akshaye sir’s character is completely opposite to mine. He’s a private criminal defence lawyer, who demands an expensive fee and is rich. I am just nailing his character. And because she’s a prosecutor, she never has to defend anybody. She just has to be watchful of the ‘bad’ guys.”

Richa says that everybody has the constitutional right to be represented and defended, even the five horrible men, who were accused in Nirbhaya’s rape and murder. Even (Ajmal) Kasab in India had a lawyer. So that’s the beauty of the Indian Constitution that “it’s very fair. It gives even an aggressor to present his point of view, which is important too.”

Not always do people know about how law works and what it means. So how does this film try to bring that up? Richa observes that even the educated people barely understand the law. She says, “Only lawyers and the judges know about it besides people working in judiciary and the police force, of course. So films like these will only help to create an awareness among the masses.”

We cannot ignore the fact that films and every other manner of story-telling have a responsibility towards the society as they have the highest capacity to impact diverse minds collectively. The actor feels that of course, films have a responsibility and they are a powerful medium too “but then if there is a pressure to teach and educate the audience, we won’t be able to make all kinds of film because there are some on terrorists and gangsters too. If cinema sits down with this responsibility, this medium of entertainment will soon come to end. Interesting characters are always grey. You cannot be preachy all the time. The responsibility that cinema should be screened by the censor board only and not by common public because kal ko fir koi bhi kuch bhi boldega, which is what happens in India — hall ki seats tod do and things that they say like yeh hamari sanskriti ke khilaf hai. At least watch the film first. People just watch the trailer and make up their minds. We have a censor board and it is their job to certify films,” says she.

Laws have changed after Nirbhaya’s case and there is talk of legal reforms and fast trials, but the stigma and blaming of rape survivors is something which is unfortunately very much prevalent. Richa feels not only in India but anywhere in the world, there is a social stigma and drama attached to it. And it’s a very common problem that a lot of rapes go unreported. “So there is need for change of attitude in society. People need to stop associating shame with the survivor. Social mindsets don’t change with just a click. They take a long time. The government alone cannot combat damaging stereotypes around it. But they do play a critical role. And this film aims to do just that — initiate a dialogue around the stigma that rape survivors face in our country,” says Richa with a hope of seeing a better world.

(The film releases on September 13.)