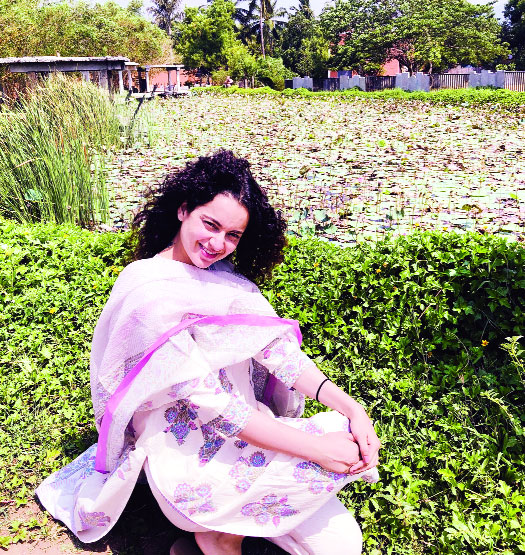 Kangana Ranaut is taking on a new spiritual role in association with Sadhguru. This time in real rather than reel, says Team Viva

After taking on the avatar of a fashionista, Bollywood’s representative at the Cannes, actor and more, Kangana Ranaut is now reinventing herself to increase her appeal by taking up a more spiritual path.

And like many other stars who have taken to Instagram to communicate with their fans, she too favoured the social media site over the others. Recently she shared a picture of herself at Sadhguru’s Isha Foundation Yoga Centre in Coimbatore. She can be seen sitting beside a lotus pond which gives an idea of the natural environment of the yoga centre. There is serenity on Kangana’s face which makes her look peaceful yet she shines brighter than usual.

Kangana attributes it to the Samyama, an eight-day intense yoga course consisting of meditation and silence, which she attended here. Speaking on how she ended up attending the programme, Kangana said, “When I first met Sadhguru after my initiation in US, he looked at me and said that I should do Samyama, and then I realised that it was like the Ph.D of Isha universe. However, I was very happy (and content) with Shambhavi, the 21 minute kriya which was a part of inner engineering programme. It gave me back my exuberance and energy levels. And (so) I told him I should take it slow, but he insisted that I should do this.”

She goes on to describe what the course accomplished for her. “So, I started taking advanced levels, and when I started Samyama, I was very scared. People attend this programme after five-six years of kadi sadhana (intense dedicated practise), but for me, it was just one year. And then suddenly, on the fifth or sixth day, it just opened up. I am so grateful I did this. It’s difficult to explain the experience in words, but before this, Shiva for me was a dimension and something I could mentally understand. But after Samayama, he has unleashed Shiva in me, he has become my breath. When I felt him for the first time, it took me back to my time as a kid (when) I lost him, I could tell this was what was missing from me. I told my mother that I am home, I have found what I lost, and everything makes sense. Something so profound has happened to me, that no amount of success, money, awards, relationships have ever touched me like that.”

The Queen star is known for her upfront attitude in the industry also organised a premiere of Manikarnika: The Queen of Jhansi at the centre. She shared a video with spiritual guru Sadhguru Jaggi Vasudev where the latter is seen requesting the viewers to watch a historical movie like Manikarnika: The Queen of Jhansi. “Today is a different kind of day at the Isha Centre as we are going to the movies. Today we are showing a special movie. And Kangana, herself is presenting the movie... If you are not  a history buff and you are not going to read a history book, atleast see something  at the movies to have a sense of how this nation was made,” he says.

In the same video Kangana says, “I am so honoured that Sadhguru and all the volunteers requested for the screening of the film. It is on nationalism.”

Another photograph posted by Team Kangana Ranaut,  is accompanied by the following description, “A special screening of #Manikarnika at the Isha Yoga Centre in Coimbatore. The crowd was cheering, clapping and whistling almost throughout the movie. A memorable screening indeed.”

Meanwhile, on the work front, she will be seen next in Mental Hai Kya alongside Rajkummar Rao which is slated to release on July 26, 2019.

Last year she had interviewed him for one hour and 53-minute long In  Conversation with the Mystic which was promoted by Sadhguru’s YouTube channel with the title India’s Youth Icon Meets the Epitome of Truth! Kangana Ranaut with Sadhguru. She had discussed a wide variety of issues along with nationalism, her film and more